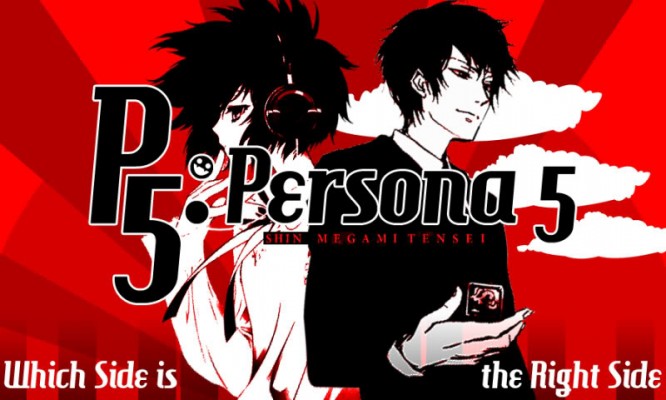 Fans of Atlus and the PERSONA series have been waiting a long time for PERSONA 5. PERSONA 4 released in 2008 and went on to be one of the highest rated video games of all time. It social-linked its way right into fan’s hearts and hasn’t left since. The wait for PERSONA 5 has been agonizing however. Between being sort of announced three years ago and the Persona Team taking their time making CATHERINE first, fan expectations have been high. Today Atlus finally announced PERSONA 5 along with two other PERSONA titles that we will be able to finally play in the near future.

The first announcement came in the way of PERSONA Q: SHADOW OF THE LABYRINTH for the 3DS. PERSONA Q is taking the cast of PERSONA 3 and PERSONA 4, making them all chibi, and throwing them into a big fanservicey RPG. It is first person in dungeons again which I’m not a fan of but the visuals seem pretty slick for what they are trying to pull off. It seems like it will be a fun time when it releases in Japan on June 5, 2014. No word about a Western release.

The second announcement was that PERSONA 4 ARENA: ULTIMAX SUPLEX HOLD is coming to PS3. For me this was already obvious since the original game was on PS3 as well. They showed off the game but it wasn’t anything we hadn’t seen before beside a surprise character cameo that will leave PERSONA fans wondering.

The third announcement was that we are also getting a PERSONA rhythm game! Just what you always wanted right? Right? Well I wouldn’t get to worked up. PERSONA 4 DANCE ALL NIGHT for the PS Vita looks pretty hilarious  (seeing the MC dance made me laugh out loud) and kind of fun. I’ve never tried this type of game before but for PERSONA I definitely will. PERSONA 4 DANCE ALL NIGHT is slated to release in Fall 2014.

The fourth and biggest announcement is of course that PERSONA 5 is finally nearing release! We’ve been teased about the game for years now and Atlus even decided to tease throughout the event by basically just taking as long as they possibly could. At the very end we finally got a glimpse (though a very small one) of what PERSONA 5 is.

Again, it was a very small reveal for PERSONA 5 but honestly, them committing to a release date is the best thing that could happen for me. Winter 2014 just got a lot warmer in Japan. Hopefully it won’t take long for the game to be localized but I think we probably won’t see PERSONA 5 hit Western shores until sometime in mid 2015. Time to play some more PERSONA 3 and PERSONA 4 while we wait.