Patrick Stewart and Ian McKellen back as Professor X and Magneto in X-MEN: DAYS OF FUTURE PAST 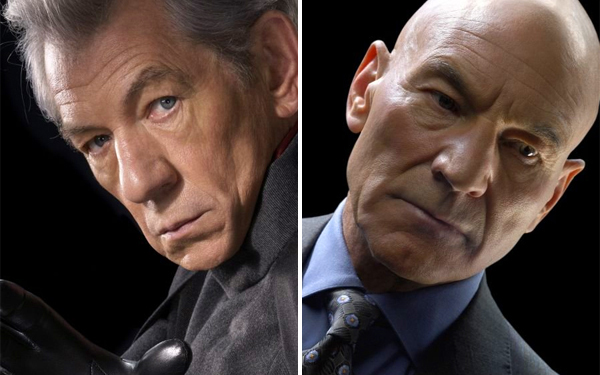 In case you have been living under a decapitated Sentinel head lately, you may have heard that Fox is moving forward with a sequel to 2011’s X-MEN: FIRST CLASS titled X-MEN: DAYS OF FUTURE PAST. And yes, this will be loosely based off the comic book storyline of the same name written by Chris Claremont that deals with aspects of time travel and a gloomy dystopian future where most of the X-Men are dead and Sentinels roam the Earth.

Something else to take note of is that FIRST CLASS director Matthew Vaughn (KICK -ASS) has left the directors chair (for STAR WARS??) and has been replaced by Bryan Singer who you may remember as the man who kick started the whole “Super Hero” genre with the original X-MEN and X2: X-MEN UNITED. I could not be more excited to have him back!

On with the news I teased in the headline. Yes, it appears that the original film versions of Professor X (Stewart) and Magneto (McKellen) are back for this time-traveling adventure. While it is not clear how large their roles will be, one can expect something substantial due to their star-power and high level of awesomeness. It is also projected that Wolverine himself Hugh Jackman is in serious negotiations to reprise his role as well. Will there be more to come? Only time will tell, but my guess would be yes. Here is what Singer Tweeted recently to confirm the actors involvement:

Alright so Singer says that there is “more to come.” We all know Jackman is all but confirmed to reprise his role as Wolverine here. What I want to know is who else! And by “who else” I mean “will Cyclops get another chance here?”. If there is one thing I could wish for with this sequel (prequel? presequel?) it would be to correct the wrongs of X-MEN 3. SPOLIER ALERT! If professor X and Cyclops both got obliterated by the Phoenix force in X3 and Professor X is coming back, does this mean Cyclops can too? I mean this IS a story based on a comic book where these characters have all died and come back time and time again. Will the writers be smart enough to make their comeback cool? It would be sweet to see Cyclops come back to meet his brother Havoc who is younger in the comics. This could be a clever way to stay in line with the movie universe and still have Cyclops as the older brother! Please make this happen Marvel gods!

I could go on for ages about what I want out of this new X-Men film. The point is that Singer is back and it looks like he’s trying to get the old team back together and I am overly excited. What do you think? Who do you think should return to the franchise? Sound off in the comments section below.

X-MEN: DAYS OF FUTURE PAST is slated for a Summer 2014 release.

In the San Francisco area looking for your next  X-MEN comic book fix? If so, Check out MISSION: COMICS & ART. They’ve got you covered!