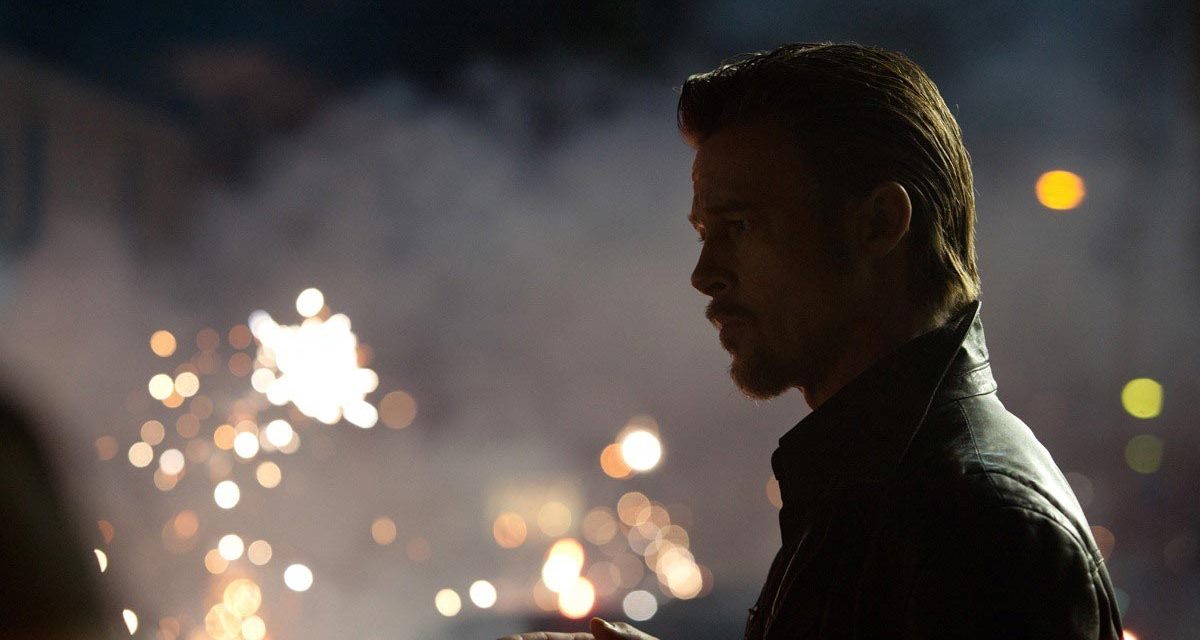 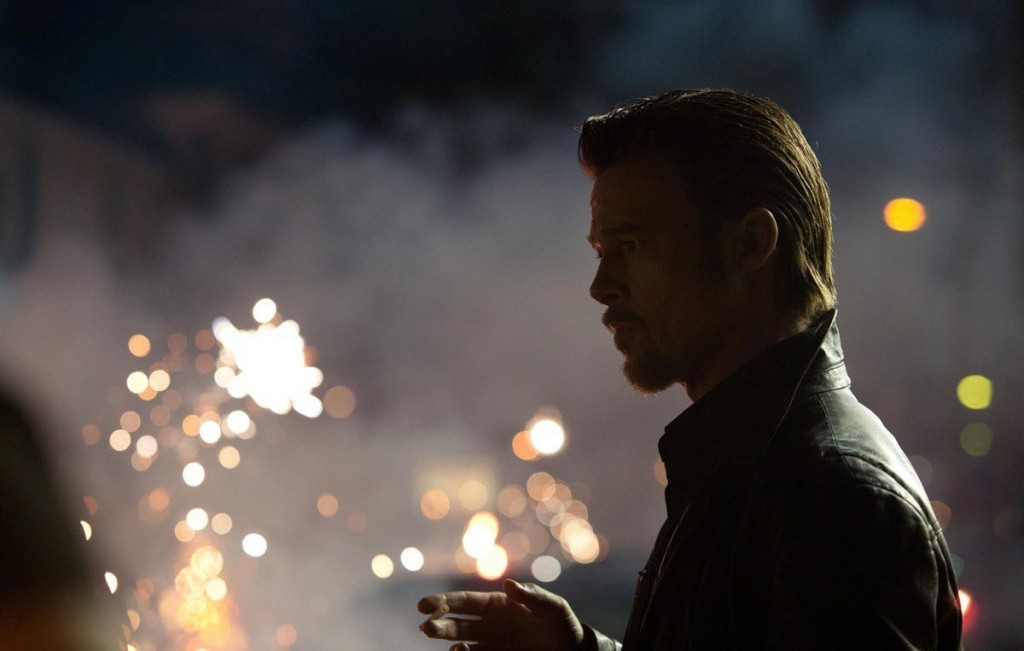 Is there a stronger metaphor than “on the nose” for something that bludgeons you to death with its symbolism? How about “on the head, chest and back?” That sounds about right for the manner in which Andrew Dominik (CHOPPER, THE ASSASSINATION OF JESSE JAMES BY THE COWARD ROBERT FORD) hammers into us KILLING THEM SOFTLY’s major themes. I bring up the unsubtle message before describing the plot because the latter is not important (it’s that kind of film) and the former is likely to turn a lot of people off. Buried beneath the suffocating motif, however, is an engrossing depiction of the middle-to-low rung of the violent criminal class in Louisiana. Time for some plot: A few guys think it would be a good idea to rob a wiseguy’s card game. In a thrilling, deliberate scene they pull the heist off successfully. The aftermath causes low demand in future table games. The people in charge hire mob muscle in the form of Brad Pitt to find and punish the aggressors in an effort to stimulate their economy. That last part is key: stimulate their economy. 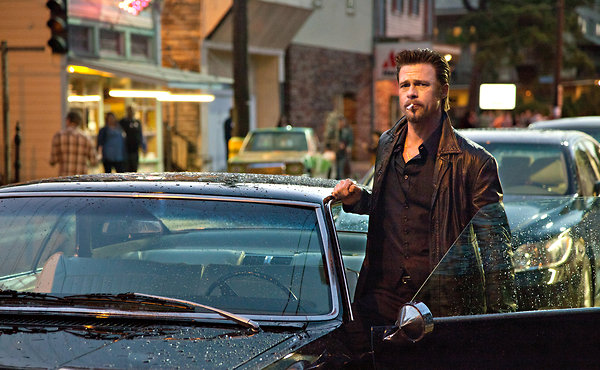 Dominik and co. are having a lot of fun equating the financial collapse of 2008 with the occurrences in their film. So much so that the film is set during said crisis and into (spoilers for real life) Obama’s election night victory. Radio and TV speeches of Obama, Bush, McCain and Bernanke are spliced and constantly shoehorned in through the film’s 97 minute running time. The movie is telling (nay, shouting at) us that our financial doldrums were felt up and down the every single economy–even the illegitimate kind. The filmmakers must have assumed that audiences would find it hard to believe that every low level criminal schmuck would be listening and watching political doublespeak so I have to conclude that it was a sort of artistic sound editing choice. Unfortunately, it detracted and did not engage, rather after the third time of many it took me out of the film. Making stylistic choices that advertise your directorial decisions is a fine tightrope to walk on. Dominik spends the whole film in search of equilibrium as the movie’s use of overt thematic elements are just the beginning of its lofty ambitions.

Make no mistake. KILLING THEM SOFTLY is one of those–to detractors–artsy fartsy films. The pace is slow. The movie is “talky.” Its cinematography, editing, and visual language are exploratory (or indulgent depending on your POV). The themes, a priority. The film has received mixed-to-positive reviews although not from regular audiences. In fact, its Cinemascore (exit polls that collect data from regular folk which then are given a letter grade) gave Dominik’s latest a big fat F. This rarity is mostly a backlash towards misleading marketing efforts that showcased the film as a fast-paced crime thriller. The movie’s ambition and concurrent audience reaction mirrors that of last year’s DRIVE starring Ryan Gosling (THE IDES OF MARCH) and 2010’s THE AMERICAN both of which were marketed deceptively in an effort to bring in a big opening weekend. What marketers don’t realize is that this sort of trickery causes bad word of mouth and your film loses whatever legs it might have had for the long run. In an instance of “See! This is why we can’t have nice things!” general audiences (whom earlier this year gave auteur Kevin James and his HERE COMES THE BOOM an A cinemascore) rewarded the artistic cojones of KILLING THEM SOFTLY with a paltry $7 million opening weekend. 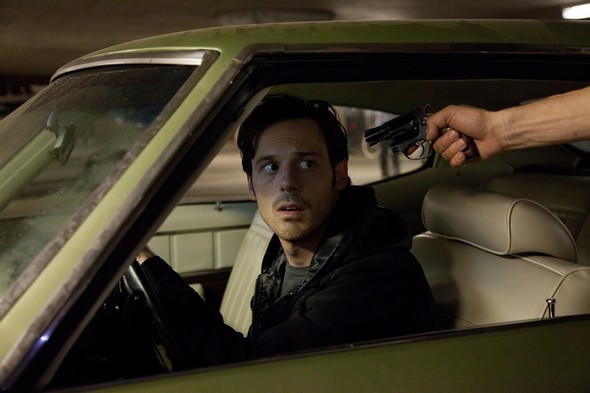 The film’s commercial prospects aside, KILLING THEM SOFTLY is full of scenes that consist of two people entrenched in lengthy non sequitur dialogue that do not further the plot. It does, however, inform the story. Every conversation, every exchange, and perhaps every stylistic flourish (did I mention there are many?) add depth and texture to the characters who then communicate the film’s themes through their performances. The onus is on the actors to broadcast the film’s subject matter from the page to the screen (did I mention the movie is way into its themes?). Luckily for us the movie is brimming with brilliant character actors cast in meaty roles that allow them room to breathe and showcase their talents. The standouts are James Gandolfini (THE SOPRANOS) as a washed up hired gun, Richard Jenkins (CABIN IN THE WOODS) as a nebbish mob lawyer, and Ben Mendelsohn (ANIMAL KINGDOM) as an unscrupulous junkie. Brad Pitt (TROY) is in his element giving a solid performance as an amoral mob enforcer.  If the film’s mob characters are metaphors for capitalism at its rawest–its purest– then Pitt is the free market’s steadfast compass. There’s no sentimentality to his character. He knows the law of the land and enforces it without prejudice. Violence is the currency with which the characters trade and the film does not shy away from demonstrating its real life consequences (most notably in a couple rain-soaked scenes). Dominik’s latest is by no means the frenetic thriller advertised but it earns its R rating in spades.

In these muddled times KILLING THEM SOFTLY is a blunt instrument of cynical truth with its crosshairs aimed squarely at institutional decay and the myth of the American dream. Leave your brain on for this one.