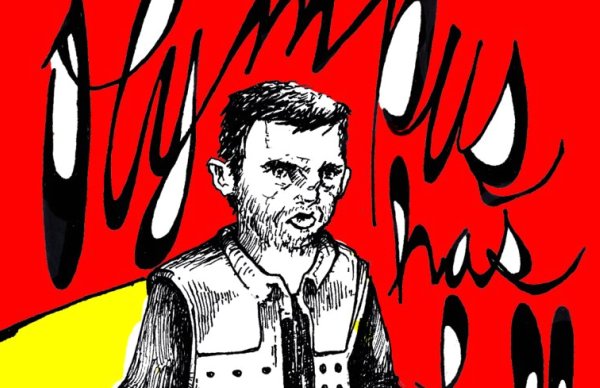 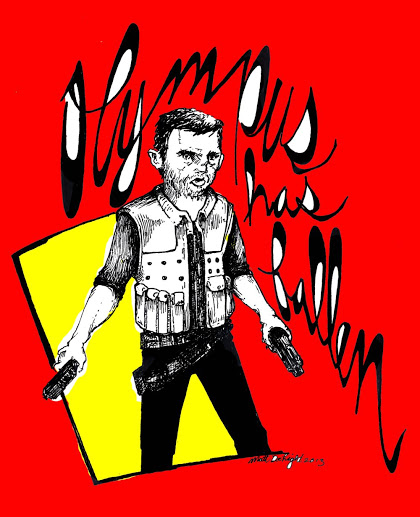 On my first day of Film 101 the professor stressed the point that the only way to approach film is with the willing suspension of disbelief, and that is more than necessary when watching OLYMPUS HAS FALLEN. The movie is a typical lone hero action thriller, and while this is certainly one of Hollywood’s least believable premises, it can be a fun one. The movie focuses on Mike Banning, a secret service agent who is desk jockeying after saving the president’s life in a car accident, but failing to save the first lady. It comes as no surprise that when a group of North Korean terrorists start attacking the White House, Banning quickly abandons his desk and rushes right into the thick of things. In short order the terrorists are in control and Banning is the only surviving serviceman in the White House; on a personal mission to save the president and the president’s family to redeem himself for his previous failures.

Antoine Fuqua (SHOOTER) is the director behind such great action thrillers as TRAINING DAY and THE REPLACEMENT KILLERS so I had high expectations for his directorial work on OLYMPUS HAS FALLEN and I was not disappointed as he handles the film with the steady hand and eye of a veteran. The movie is one of the most polished action films I’ve seen in recent years, which is refreshing because, while I understand why directors would want to make a movie look more gritty or realistic, when it comes to action films I find those stylistic choices more distracting than enhancing. There are some quick cuts, particularly in the darkened corridors of the White House, but they are not so prevalent as to stifle the flow of the film. The biggest directing highlight for me were the scenes where the assault plane was attacking Washington DC; Fuqua gives us a lot of sweeping aerial shots that are a real treat for the eyes. The only stylistic choice that didn’t mesh well with me was the down playing of graphic violence. A movie like this has plenty of gun play, and Fuqua certainly doesn’t shy away from having people get shot left, right, and center, but what I really loved in the action movies of my youth were the scenes where people would get impaled, brutally bludgeoned, lose a limb, and so on, and while Olympus has some of that kind of violence, most of the coup de graces are implied or done in the dark. I just feel that if I am going to see an R rated action film, I want to see it when someone gets stabbed in the head. 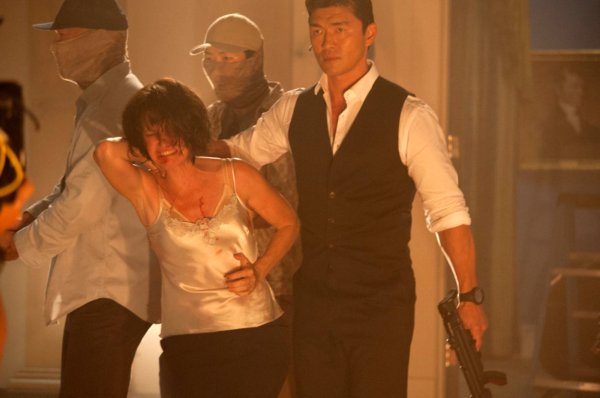 While OLYPUS HAS FALLEN has an impressive ensemble cast, many of the performances are hit or miss. Gerard Butler (MACHINE GUN PREACHER) stars as Mike Banning and the role is a perfect fit for him. Whether being buddy buddy with the president’s son or pulverizing terrorists he maintains a likeable attitude of a man who can control himself in any situation. President Benjamin Asher is played by Aaron Eckhart (THE RUM DIARY) and the role did nothing for me, however, I feel this may have more to do with the script than the acting. The President comes off as exceedingly nice and unassuming in the early parts of the movie, and that is a perfect role for Eckhart, however, it is exceedingly difficult to believe that that person could be the president; and the ensuing hostage situation does nothing to alleviate said disbelief. Dylan McDermott (PERKS OF BEING A WALLFLOWER) plays the traitorous former secret service agent Forbes, and while he does a decent job with the role, the character is pretty underdeveloped, making him disinteresting at best and distracting at worst. Rick Yune’s (THE MAN WITH THE IRON FISTS) talents are wasted on terrorist leader Kang because, while he does a wonderful job of playing an arrogant villain, there is once again too little character development to boost Kang from passable to memorable. Speaker of the House Trumbull is played by Morgan Freeman (THE DARK KNIGHT RISES) and, as usual, he does an excellent job with the role. Freeman’s calm yet in command portrayal of Trumbull is one of the highlights of the movie; it is very fun to watch him control a command room and put insubordinates in their place. Melissa Leo is fierce as Secretary of Defense Ruth McMillan; she mixes a perfect blend of fear and defiance to give us some of the most memorable scenes in the film. Lastly, Angela Bassett plays Secret Service Director Lynn Jacobs and gives her the right mix of approachability and power, which makes for one very believable character. The acting shortcomings of OLYPUS HAS FALLEN have far more to do with the script than with the actors themselves, even so, there are many very fun performances in this movie. 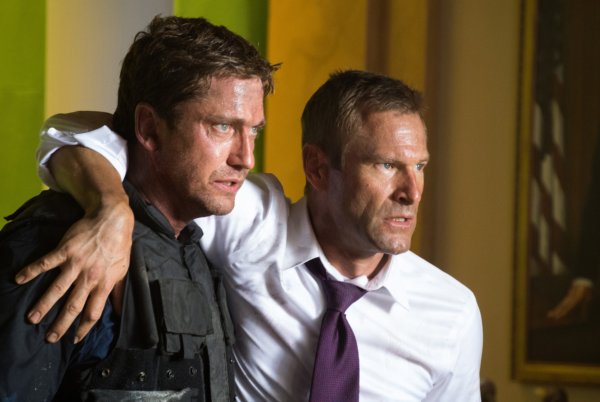 While OLYPUS HAS FALLEN is definitely a fun movie, it can also be maddening at times. For one thing, there are a couple of different instances where the terrorists are using US military equipment and a US army general asks where they got it from, sadly, we are never given an answer. Also, as I mentioned when I was discussing the cast, the villains lack character development which has a significantly negative impact on the tone of the movie because you don’t really develop the distaste for them that makes their inevitable downfall cathartic. The most prevailing issue is how absolutely unbelievable the whole scenario is in a post 9-11 world; whether the taking over of the White House, the aerial assault on Washington DC, or the myriad of smaller security non sequiturs and irregularities that permeate the film; I tried to check my skepticism at the door but the longer the movie went on the harder it was to suspend my disbelief.

OLYPUS HAS FALLEN is a fun action thriller that has enough gun fights, explosions, and vehicle crashes to satisfy fans of the genre. On top of that it is all done with a slick sheen that heightens the viewing experience. On the down side the story is more than a little over the top with some sketchy characterization to boot. So if you are looking to get an action fix or are just a big fan of Gerard Butler, than head on out to the theatres because this one should be just what you are looking for, the rest of you might want to wait until this movie hits Netflix or Redbox.