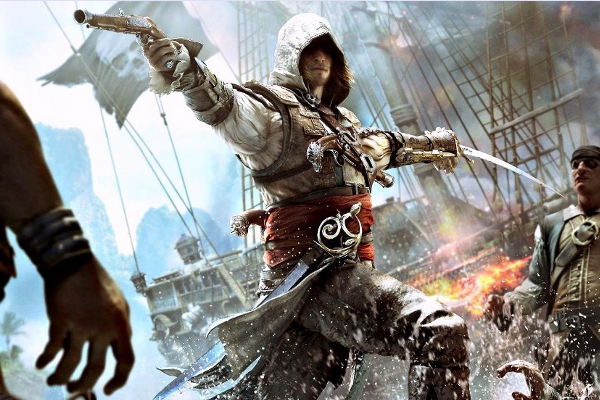 Today, Ubisoft gave people their first real glimpse into the gameplay that will make up ASSASSIN’S CREED IV: BLACK FLAG. The trailer expands on the chaotic and dynamic world that players will be entering while solidifying Captain Edward Kenway as the most ruthless pirate to sail the seas.

Without a doubt Ubisoft’s next Assassin’s Creed project is ambitious. Black Flag’s reveil trailer hit on the high notes of the game’s ambition and direction but raised flags because it showed little gameplay. This gameplay trailer certainly seems to try to answer the call of those left skeptical after the first trailer by including scenes filled with gameplay and ways to explore the Caribbean.

Is it successful in answering the woes of the skeptical?

As one of the skeptics this gameplay trailer only answers some of my woes — namely showing gameplay. It shows snippets of land and naval based combat, mostly snippets that anyone who is familiar with the franchise knows all to well. Any other game I would be content with just this amount of gameplay but I fear that Black Flag might end up just like ASSASSIN’S CREED III — an incredibly ambitious project that had immense potential but didn’t deliver in the end.

A demo might be the only thing that can truly satisfy my skepticism that revolves around this game. That’s because ASSASSIN’S CREED III’s gameplay wasn’t bad, it just didn’t grab your attention for the 30 plus hours you spend in the game. Its world felt bland and redundant. That’s what I fear for Black Flag.

I look foward to this year’s E3 (the Electronic Entertainment Expo) because it will likely make or break my excitement for this game. To get a real in-game glimpse into the kinds of situations and activities you’ll be engaged in as Edward Kenway.

The real saving grace for this game may be the environment that it’s placed in. It’s a dynamic world that is “unpredictable” and rugged, it’s something that makes this game intriguing, and if executed correctly, truly innovative for the action/adventure genre. It seems as if Ubisoft is aiming to make an experience that will be truly unique to each player. No weather pattern will be exactly the same, no combat scenario will play out quite like another.

Edward Kenway is an outlaw and an assassin. He is unlike any of the assassins we’ve played before him and that’s what puts some life back into “Assassin’s” franchise. It will be interesting to see how piracy and the duties of the assassin’s brotherhood intertwine.

Despite all of the pros and cons that surround this game, only time will tell if this game will be the Assassin’s game we thought ASSASSIN’S CREED III was going to be or follow down the same path of disappointment that its predecessor did.