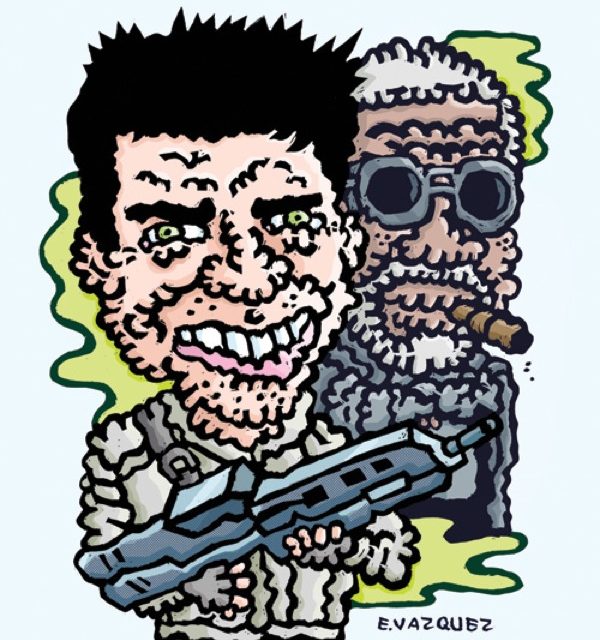 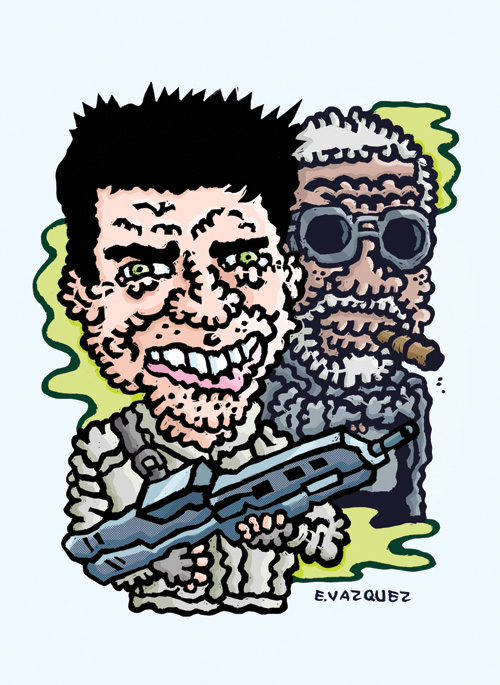 OBLIVION, starring the one and only Tom Cruise (JACK REACHER), is a visual masterpiece that treats its audience to dozens of beautiful and fun moments, that while feeling familiar at times, creates a wonderful movie-going experience. OBLIVION is director Joseph Kosinksi’s sophomore effort (his first being TRON LEGACY) and he has definitely solidified himself as someone to look out for. Kosinski takes great leaps and strides with OBLIVION creating a much more realized and ambitious film compared to TRON LEGACY (which I also enjoyed).  Anyone who’s a fan of science fiction (or Cruise!) owes it to them self to check this one out in theaters  in order to soak in all the beauty, action, and excitement that OBLIVION has to offer.

OBLIVION tells the tale of a man named Jack Harper (Cruise) who spends his days repairing drones that hunt and kill the remaining aliens who tried to take over Earth many years ago. The alien invaders destroyed our moon causing massive elemental destruction and then invaded when humanity was at its weakest. Humans prevailed in the end, but the Earth as we know it was destroyed. Humans set up huge machines spread across the globe to salvage our remaining resources before Jack and his companion/working partner Victoria (Andrea Riseborough; NEVER LET ME GO) must abandon the destroyed Earth once and for all. Their objectives are almost complete when a series of events causes Jack to question his mission, the motives of the alien invaders, and even his own role in all the madness. What ensues is a solid 2 hours of an engaging (yet familiar) story, stunning visuals, and some great moments of action and excitement. 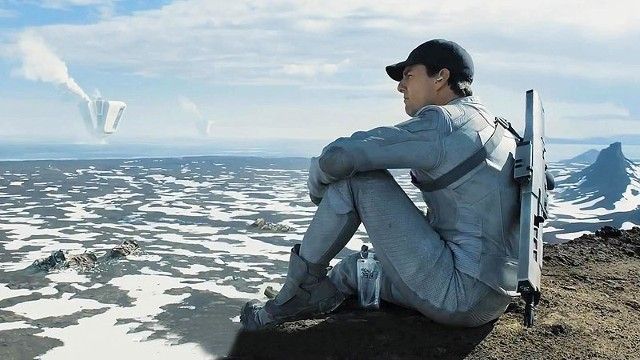 Make no mistake, OBLIVION is a Tom Cruise starring vehicle. Love him or hate him, Cruise is a powerhouse performer who wholly commits to his roles and he definitely delivers his A-game here keeping his reputation in check. I make it no secret that Cruise is my favorite actor, and OBLIVION is a great role for him. Cruise effortlessly captures that “everyman” vibe that we all know and love, and his performance here, while surely not award-winning, is easy to relate to and enjoyable to watch. I can’t think of a lot of actors that can own a movie like Cruise does. Others players in OBLIVION besides Cruise include the aforementioned Andrea Riseborough as Victoria who delivers an appropriately emotional performance as Jack’s sometimes love interest and co-worker, Olga urylenko (QUANTUM OF SOLACE) as a mysterious woman who crash lands on Earth and is tied to Jack’s past, and the always-appreciated Morgan Freeman (OLYMPUS HAS FALLEN) who gives a nicely stoic performance as Beech, the leader of an underground group of human survivors after the war who is so bad ass that he wears sunglasses in the dark. Yeah, you wish you could be that cool and pull it off too. Besides those mainstays, there are a handful of other actors and actresses who have such small roles that they didn’t really have enough time to help or hinder the overall experience. All said and done, I believe all the actors and actresses did a great job supporting Cruise who was the real anchor to this film.

Besides Cruise, I have to admit that the real star of this film is the visuals. I can’t stress enough just how amazingly beautiful this movie looks. We are treated to a huge amount of vast landscape shots that I know are computer generated but look so damn convincing. Huge cities are completely leveled, hints of famous landmarks are scattered about, hulking ocean liners are abandoned in vast deserts that used to be oceans, and there are pockets of nature attempting to reclaim what’s left. The animation and effects team at work here did a wonderful job crafting a believable and unique dystopian future that was a total blast to explore. Besides those breathtaking landscapes, imagine Apple being in charge of all the newly built buildings (skytowers!), weapons (the guns looked so cool!), and vehicles (sweet flying machines, a transformer motor bike, creepy ass drones!). The sleek and simple designs of all these elements are very well-conceived and create a wonderful juxtaposition to the drab and destroyed Earth they inhabit. It’s also worth noting that the band M83 did the entire soundtrack and was seriously an integral part in creating the overall tone and atmosphere in OBLIVION. I can easily rank OBLIVION up there with DRIVE and HANNA as some of the best films to be complimented by a perfectly fitting soundtrack that actually heightens the overall experience. 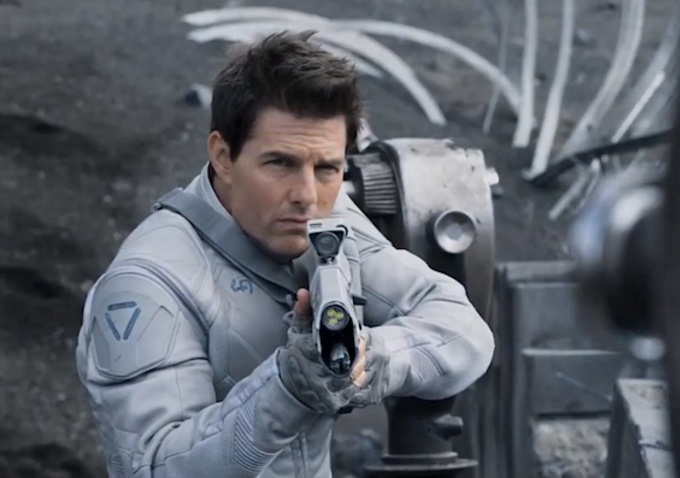 Okay, just to prove that I am not totally biased when it comes to a Cruise movie, let me detail a few criticisms in OBLIVION that bogged down my experience a bit. Firstly, I believe OBLIVION spent way too much time in the opening sequences explaining to the audience why the Earth was the way it was. That COULD have been fine if not for the fact that it was all repeated, almost word for word, about an hour into the film during a conversation Cruise has with the woman I mentioned above who crash lands onto the planet. It would have been great if we (the audience) could have discovered those realizations through the narrative and character interactions rather than just being flat out told in the opening credits. Possibly a nitpick, but it was something that bothered me. Another gripe I had with the film was a handful of confusing moments in the narrative (especially the swift and somewhat anti-climatic conclusion) that could have been remedied with some better pacing and the fleshing out of the film’s alien menace. And finally, I have to say that it is glaringly obvious that Kosinski is a fan of the science fiction genre and borrowed HEAVILY from a lot of other well-established franchises. You will easily be able to pick out nods to the TERMINATOR franchise, 2001: A SPACE ODYSSEY, THE MATRIX, and SOLARIS just to name a few (and a couple of cool unrelated nods to TOP GUN!). While these familiar aspects are not necessarily a bad thing, it was somewhat distracting. This doesn’t mean that OBLIVION lacks it’s own identity (because it surely has one), but it would have been nice to see some new concepts that maybe could have freshened things up a bit. Hey at least it’s not a reboot, remake, or sequel (I’m looking at you summer 2013).

My minor nitpicks aside, OBLIVION was an absolute blast and a pleasure to experience on the big screen. Director Joseph Kosinksi is proving to be a science fiction force to be reckoned with, Tom Cruise delivers a great performance (as always), and this is easily one of the most visually arresting films I have seen in a long time. Everything from the landscapes to weapons are simply beautiful. The story remained engrossing even considering its solid 2 hour run time, the action was fun and often intense, and there were a handful of memorable moments and set pieces that will stick with me for a long time. OBLIVION is definitely my favorite film of 2013 thus far and you can bet our (look below) TOP GUN and JACK REACHER hat-wearing asses that I will own this film when it lands on Blu-Ray later this year. Highly recommended. 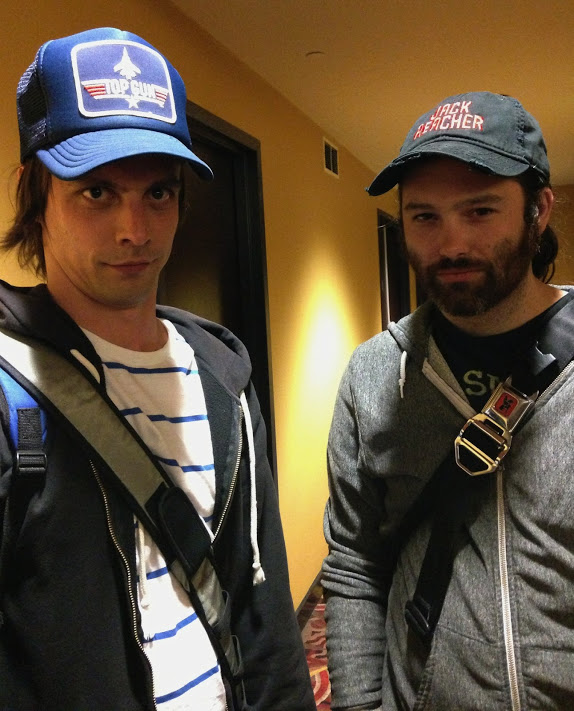 Jason Furie and Derek Hansen at the premiere of OBLIVION