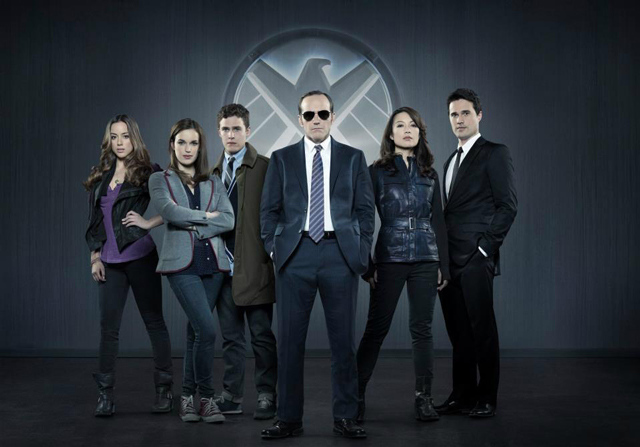 Marvel’s little “shared universe” experiment continues to branch out and astonish with the Pilot episode of the highly-anticipated AGENTS OF S.H.I.E.L.D. television show.  AVENGERS director Joss Whedon, along with his brother Jed and Maurissa Tancheroen (DR. HORRIBLE’S SING-ALONG BLOG), brings the superheroic escapades of the Marvel Universe to the small screen.  Though this time the adventures are seen from the perspective of a rag-tag group of regular human operatives from the Strategic Homeland Intervention, Enforcement and Logistics Division.  As one agent puts it: “Someone really wanted our name to spell out S.H.I.E.L.D.”

In the aftermath of the alien attack on New York City in AVENGERS, the world has become a very different place.  Salvaged alien technology and advanced scientific breakthroughs are available on the black market to the highest bidder, individuals with augmented abilities are coming out of the woodwork and the average person is now stuck between sheer awe for these new wonders and questioning their own importance in comparison to existing beside titanic green giants and real-life gods.  Enter S.H.I.E.L.D.’s Level 7, led by a resurrected Agent Phil Coulson (a role reprised by Clark Gregg).  Seemingly back from the dead after his sacrifice in AVENGERS, Coulson leads the new team in investigations dealing with the emergence of new superhuman abilities and other phenomena.  In other words, it’s “Marvel meets THE X-FILES.”

Right out of the gate, AGENTS OF S.H.I.E.L.D. tries to match the spectacle of its big-screen counterparts.  For a television budget, the sets and effects are top notch as indestructible men leap out of exploding buildings, high-tech analysis gadgets careen through a crime scene and moments of hand-to-hand combat are visceral and intense.  The stories may be smaller in scope compared to an Iron Man or Thor adventure, but the Marvel pizzazz is prevalent nonetheless.  The cast, for the most part, is also very engaging.  Gregg’s Coulson character shines even brighter now that he’s headlining his own team.  His deadpan delivery and dry wit are at their best, but it looks as though Coulson will have opportunities to demonstrate his softer side as the show progresses.  One particular moment where he attempts to talk down a rogue superhuman (played by ANGEL alum J. August Richards) stands out in my mind.  This guy has walked toe-to-toe with living legends, but that doesn’t stop him from appealing to the humanity that resides in everyone.  And given that Coulson’s return from the dead is shrouded in mystery, even to himself to some degree, only gives the character more intrigue as the eventual revelation behind what truly happened to him will prove to be Earth-shattering (it’s only the Pilot and I’ve already got some theories brewing in my head). 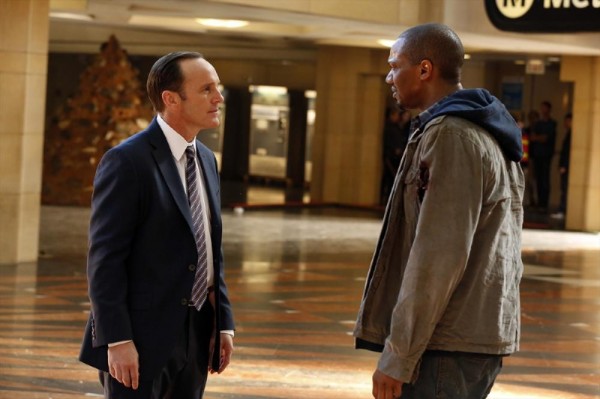 The rest of the team is serviceable in their roles.  Brett Dalton (BLUE BLOODS) has got the right amount of arrogance and confidence to play the team’s main field agent Grant Ward (it’s stated that his combat abilities are almost on par with a certain Black Widow’s).  Chances are we’ll be seeing him and Coulson butt heads a few times.  Ward also appears to have hit off an instant love/hate relationship with the civilian hacker called Skye played by Chloe Bennet (NASHVILLE).  She starts off as something of a bubbly fangirl for all things superhero, but quickly proves her mettle when she’s reluctantly drafted into Level 7’s dealings.  Ming-Na Wen (EUREKA) plays Melinda May, the team’s vehicle and weapons expert who also demonstrates her badass fighting skills.  She is as reluctant as Skye to be part of the team and I’m sure more will be revealed in time as to why she left fieldwork behind.  Rounding out the team are the scientific duo of Leo Fitz (Iain De Caestecker) and Jemma Simmons (Elizabeth Henstridge) who do essentially fill in the role of the quirky science nerds (much like Willow from BUFFY), but I’m sure they will be given more development as the show continues.  Special guest stars included a brief appearance from Ron Glass (FIREFLY) as a S.H.I.E.L.D. doctor and Cobie Smulders (HOW I MET YOUR MOTHER) reprising her AVENGERS role as Maria Hill.

Indeed, the show is heavily immersed in the mythology of the Marvel Cinematic Universe…and that may be its one major drawback: it’s not quite user-friendly to the uninitiated.  Direct references to events from the films abound in the episode.  Each of the Avengers gets a little shout-out here and there, and let’s just say that it’s no coincidence that the show premiered on the same day that IRON MAN 3 hit BluRay and DVD as an important plot thread from that film ties directly into the Pilot.  Needless to say, that’s the appeal of the show for the main fan base: a weekly series that takes place in the same world as the big blockbuster superhero epics we have come to love.  Everything is connected much in the same way it is in the comics.  Events from the films could directly influence the progression of the show.  But that may backfire with a viewer who has never laid eyes on an IRON MAN or AVENGERS film, let alone a comic book!  You just dive on into the show with this “Agent Coulson” fellow (Who’s he?  He was dead, but now alive?  Why?  How?).  The show does attempt to catch everyone up with the world’s dynamics the best it can, but unless you have been following Marvel’s cinematic endeavors since day one, further viewing assignments may be necessary to grasp just what the hell everyone is talking about. 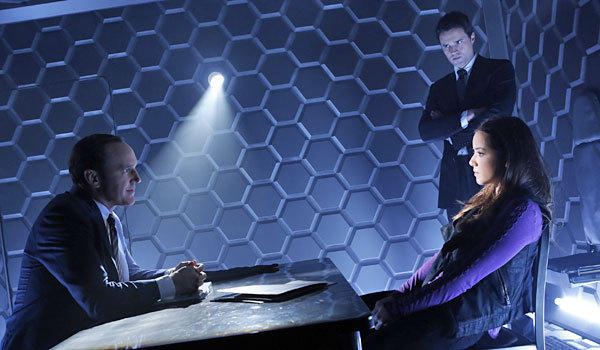 And though I feel AGENTS OF S.H.I.E.L.D. can stand well enough on its own, it may provoke one of two reactions from someone unfamiliar with Marvel’s properties: they’ll either get hooked on the show and start to delve further into the movies or they will be turned off by the exclusivity of the “shared universe” concept.

Personally, I enjoyed the Pilot and will tune into AGENTS OF S.H.I.E.L.D. as long as it lasts.  It’s got some fun characters who are provided the necessary space to grow, plenty of action & espionage and a solid backdrop with the Marvel Cinematic Universe to play out its weekly adventures.  There are plenty of possibilities for this premise such as introducing Marvel characters we have yet to see in any other media outside of the comics and bringing in their top tier heroes for guest appearances (I’ll say it again: Jeremy Renner’s Hawkeye needs to show up at least once).  It may seem like Pig-Latin to someone not indoctrinated to the film properties, but hopefully it can still hold appeal as the interconnecting tissue in between the silver screen battles of super soldiers, guardians of the galaxy and gods of thunder.  Excelsior!