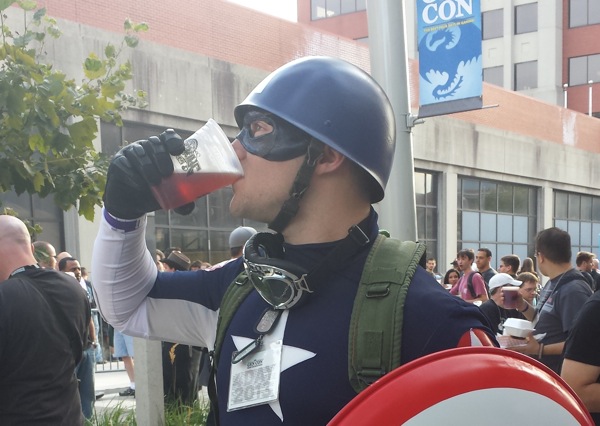 On the eve of Gen Con, the Sun King Brewery tapped their specialty brewed beer dubbed Flagon Slayer and shared their recent concoction with the people it was brewed for: Gen Con attendees.

The official beer of Gen Con 2013, Sun King’s Flagon Slayer was brewed with gamers in mind.  Dave Colt, owner, head brewer and vice president, has been making beers tailored for the convention for years.

When the convention first came to Indianapolis, Colt decided to start developing beers for the annual gathering of gamers. He used that previous knowledge of brewing for gamers to come up with the idea for this year’s specialty beer.

This year with Flagon Slayer, he and the brewery tried to get into the minds of gamers to produce a brew fit for gamers.

“I had to reach back to my teen years of nerdom, the years with monster manuals to help come up (with Flagon Slayer),” Colt laughs. “This year we asked ourselves what styles of beers haven’t we done, and knowing the crowd [that would be at Gen Con], what kinds of beers make sense. We knew that a lot of people were LARPERS and are into lots of meads. But we couldn’t do meads because of federal licensing.” 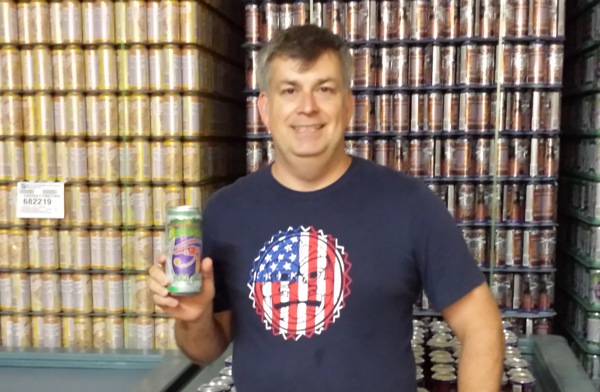 With the mead idea in his head, Colt decided to add honey into his concoction to make the pun named Flagon Slayer a braggot, which is a beer/mead hybrid that dates to the 12th century. It was made with Indiana honey, malted barley, hibiscus, and beet powder plus cherry were added to the beer to give it a cool orangey-red color.

The color of the beer is one that is unique among beers and was intended for the event.

“If  anyone could appreciate a beer with a unique color it would be the fantastic folks that attend Gen Con,” Colt said. “When trying to create Flagon Slayer the first thing that came to mind was the color. I wanted it to be like the color of alien blood.”

Colt’s intuition was right, both the taste and the look of Flagon Slayer was a huge success among attendees of the convention. 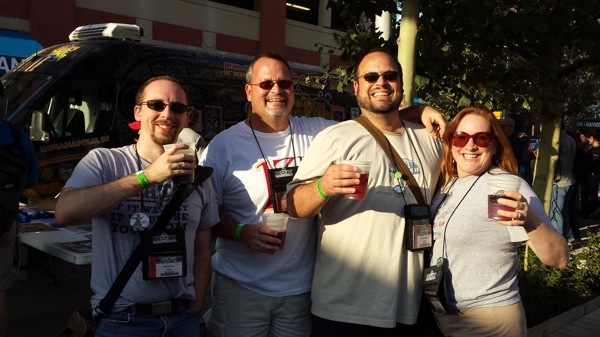 “I love the beer, I love the pun and I think it adds a little more to the Gen Con experience,” Jenny from Pittsburg said. “For the people that are of age, it gives us something else to do that’s outside of the convention center to relax.”

“Gen Con is a five day event where everyone that is here gets what each other is in to, we don’t have to explain what we like to anyone, and that’s an amazing environment to be a part of,” Patrick from Pittsburg said. “It’s very cool to see Sun King play to the nerd culture and treat us to a specialty brew just for us, and what’s even better is that it’s great.”

For Colt and Sun King, making Flagon Slayer was about introducing some “ole fashioned Hoosier” hospitality to the Gen Con attendees, to give them a great beverage and help them enjoy themselves and have fun – even if they happened to be from Indiana.

“We just love to make beer here at Sun King,” Colt said. “It’s our passion and what we do and we hope that people enjoy the beer that we make.”

Sun King Brewering Co. is a local Indianapolis brewery located in Indiana. The only way to get a hold of Sun King’s products is to purchase it in Indiana, but if you happen to be in Colorado in October you can taste Sun King at the Great American Beer Festival.