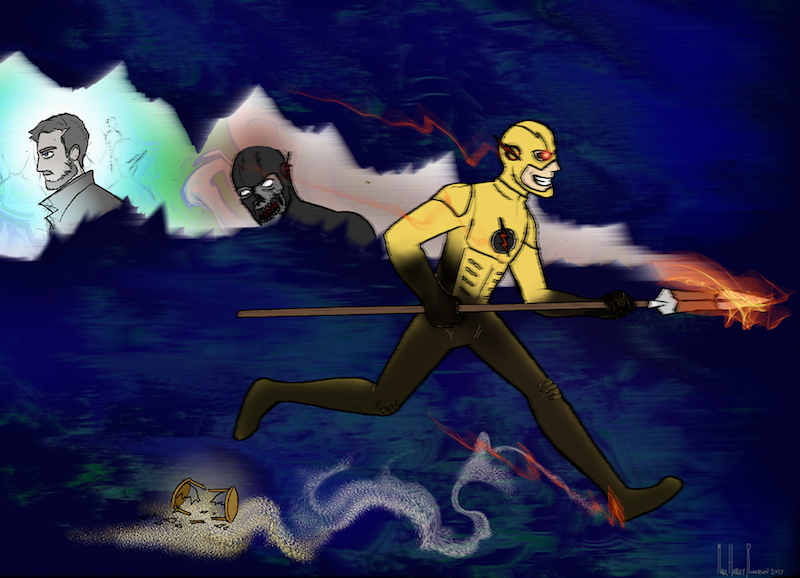 I will start this off by saying that LEGENDS OF TOMORROW is the most ‘comic book’ show on television. Donald Duck the haters. Yes. It definitely stumbled in it’s freshman year. (Don’t get cocky, season 1 is a little rocky.) It was bogged down by its central premise of defeating Vandal Savage. I can’t believe how excited I was when it was announced that he was the villain and how annoyed I was with him by the season finale. The whole season stank of ‘suppressed awesomeness.’  It had all this potential that was not being utilized. (Time Pirates!) When Vandal Savage was defeated and the Time Masters dismantled, LEGENDS OF TOMORROW had the opportunity to leave behind the elements that weren’t working and take the show in a bold new direction. Not only did they embrace the madness that made season 1 outstanding, they leaned into that shit with a heavy foot in it’s second season.

The season premiere of LEGENDS OF TOMORROW felt more like a soft reboot and less like the continuation of last season’s finale. The Legends are scattered throughout time and only Dr Nate Heywood can rescue them?  Who the hell is Dr Nate Heywood?  With the help of Oliver Queen, the dashing historian discovers that the Wave Rider is cooling its heels at the bottom of the ocean and sets out to reassemble the stranded time travelers.  Once everyone is snatched up from their time periods (Ray was fighting dinosaurs, Sara was breaking lady hearts throughout Salem) the team begins their quest to discover what the hell happened to Rip Hunter. Not so fast.  First, they need to fix some time aberrations and catch an evil speedster?  Awesome. I’m in.  Travel through time and get into madcap shenanigans. Yes, please. Also, give Rory more dialogue.  He’s the best part of the show.

One of the better decisions LEGENDS OF TOMORROW made with their second season was making Eobard Thawne the main villain.  Yeah.  The dude from the first season of FLASH who took the face of Earth 1’s Harrison Wells and assembled a bunch of young scientist to create the particle accelerator that would create the Flash and give him the ability to travel back to his own time… But that’s a different story.  Not only was Eobard the main villain, his cohorts were Damian Darhk and Malcom Merlyn. I could watch those three knuckleheads kicking around the time stream all day.  How cool are those villains?  Darhk killed Laurel on ARROW, which leads Oliver to kill Darhk in the ARROW finale.  So, Eobard pulls him from an earlier timeline.  Don’t worry, he’s immortal. I can’t remember what Merlyn is getting into on ARROW.  Probably running the League of Assassins and complaining about Thea not loving him. Their mission is to assemble the pieces of the Spear of Destiny and use it to remake reality.  You see… Eobard was erased from history when his great grandson killed himself.  Then, the Flash made FLASHPOINT which results in Thawne existing again.  But, then the time stream was fixed and now Eobard is on the run from a time wraith who wants to destroy him for existing.  How can you read this and not be excited?  Easily?  Grr on your face.  Anyway… This season is all about keeping the Legion of Doom from assembling the Spear and re-writing history.  Dope.  I’m in.

Let’s just say that LEGENDS OF TOMORROW is the best show on television that you’re not watching.  They got rid of the annoying Hawk couple from the first season.  They sent Rip into the past, turned him into a 2bit director and then turned him into a brainwashed badguy.  Sara steps up as team leader and spends most of the season wrestling with the problem that she’s a time traveler who can’t go back in time and prevent the death of her sister.  The relationship between Nate and Amaya could have easily been super annoying and it wasn’t. Plus, she talks to dinosaurs. Rory’s character reminded me of the third season of the SIMPSONS.  That moment when the writers realized that Homer was the best part of the show, not Bart.  One episode, Rory is getting the viewers up to speed, over the open credits, and complains that he can’t believe that he still needs to explain this stuff. Jackson and Stein took a little bit of a step back this season, but, the writers still found ways to squeeze important moments into their character’s history.  Roy struggled with what it means to be a hero. Everyone got to fight aliens and hang out with Supergirl.  Except for Roy and Amaya. The CW is not made of money, people. Each trip through time felt fun and important, instead of shoe horned into a Vandal Savage storyline. The villains were hysterical.  Every character felt properly used. The season finale ended with the Legends breaking time and returning to a Star City full of dinosaurs. Bring on Kamandi! If you’re watching ARROW or FLASH or SUPERGIRL and LEGENDS OF TOMORROW is not on your list… Then… You don’t deserve this badge.  Or gun.  You’re off the force.