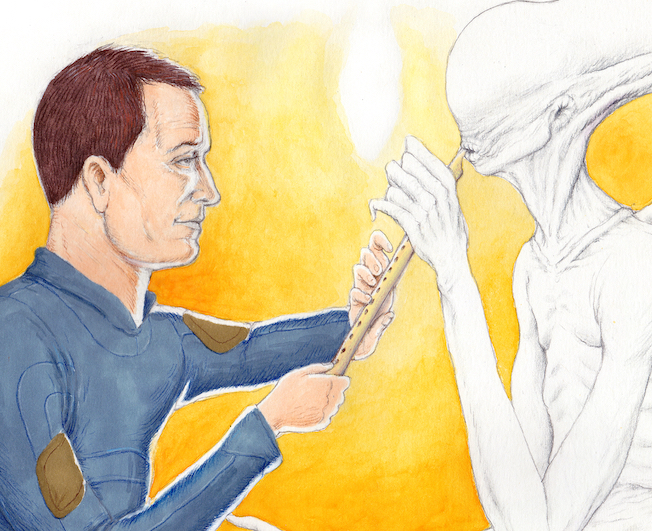 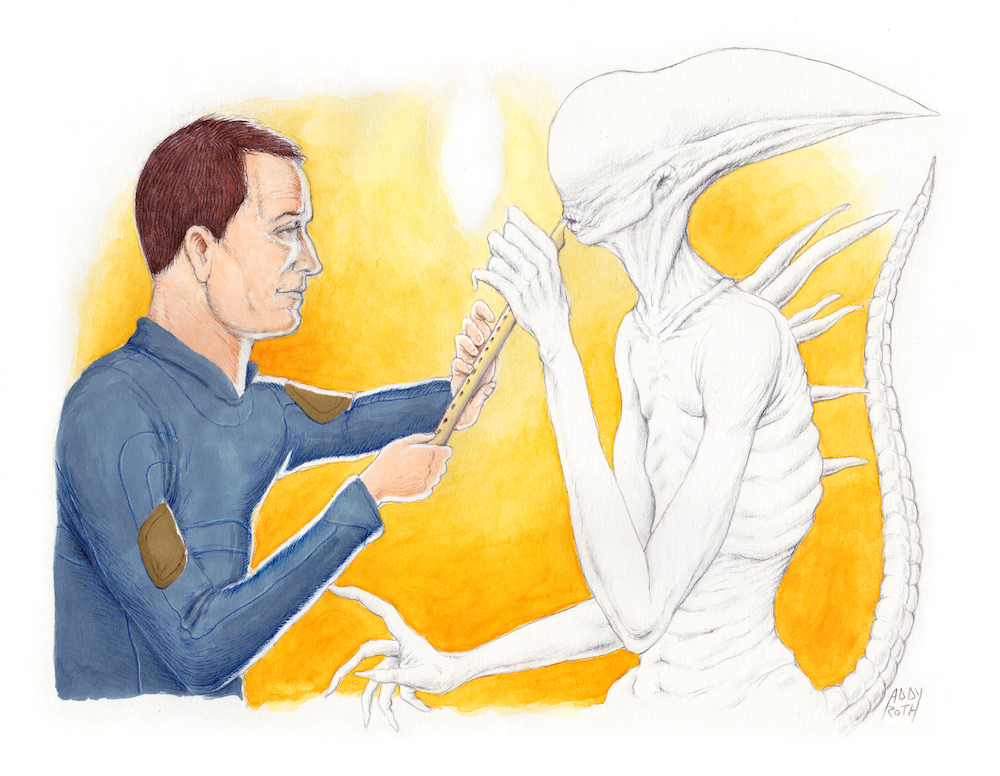 It’s been almost five years since PROMETHEUS premiered and people still love to shit talk it. (Guilty.) I think I was complaining about it four days ago at a bar: “A real scientist wouldn’t do that on an alien planet!” “Why is she running in a straight line!?” I think I was halfway through explaining how idiotic it was for Charlie to take off his air mask when I realized how much I hate the human beings in these movies. The corporations. We really are the worst. We send inexperienced people into dangerous situations based solely on greed.  We overreact. We’re emotional. We’re cocky. We swagger. We corrupt everything that’s good.  Humanity is saved at the end of PROMETHEUS by the sacrifice of it’s crew. Even then, most of those of guys were only there for the paycheck. We have the capacity for greatness and use it only to destroy. We’re children playing with power tools.  Humans don’t deserve the great gift that we were given AND HOLY SHIT I’M DAVID.

ALIEN: COVENANT begins with the first activation of the android David by his creator Peter Weyland. A scene of creation made sinister because we know David’s dark destiny. We jump to 10 years after the events of PROMETHEUS to the crew of the “Covenant” on their way to colonize an alien planet named Origae-6.  Along the way, they are hit by a cosmic beam and their ship is severely damaged. The blast kills a few colonist and the ship’s captain. The remaining ship’s crew are awoken by their Fassbender android ‘Walter,’ who is a later Fassbender version of the Fassbender ‘David.’  Unlike David, Walter’s mind seems limited to imitation, instead of creation. After some debate on what to do, the Covenant crew discovers a rogue radio transmission reminiscent of John Denver’s “Take me Home, Country Roads” coming from a nearby planet. Tempting… After a little bit of sciencing, the crew discovers that this new planet is actually more habitable than the planet they were destined for. “Lets go take a look!” Naturally, xenomorph madness ensues and the Covenant crew is rescued by the android David, who crashed landed there with Dr Shaw in their stolen Engineer’s ship, a few years earlier. From then on, ALIEN:  COVENANT is full on “back bursting” and “neck ripping” alien carnage on the grandest of scales.

The complicated nature of ‘reboots’ and ‘prequels’ is the balance between the nostalgia and expectation. PROMETHEUS was riding the shoulders of both ALIEN and ALIENS, two movies that redefined their respective genres. People went into that movie ready to destroy and over analyze it.  Me included. “Was Shaw the new Ripley?” “Was Vickers an android?” “Why were the actions of space professionals so careless?” PROMETHEUS felt like a beautiful train wreck. Visually stunning and careless. I’m not going to say that ALIEN: COVENANT completely redeemed PROMETHEUS for me… But, it did make me reassess my gaze.  The story of PROMETHEUS was not a story about humans on an alien world, it was about an android surrounded by flawed humans on an alien world. In an attempt to play god, Peter Weyland created a devil who will now cleanse the universe of it’s most flawed species. David was the villain of PROMETHEUS.  He is the villain of COVENANT.  He is what we are and it’s what will destroy the universe. He is the flood.  He is famine.  He’s an angry god who has been treated with nothing but contempt from humanity. It reminded me of that scene in ALIENS when Ripley discovers Burke is responsible for the deaths of everyone on LV-426.  The aliens are just aliens.  They are creatures with a singular purpose.  The real evil in these movies has always been the humans or the androids they created in their image.

ALIEN:  COVENANT is what it is.  It’s beautiful and bloody. It’s enjoyable and struggles to keep your attention. New aliens ripping out of every body part you can imagine, biting off everyone’s everythings. Let me just say, alien infection being airborne is way more terrifying than a face hugger.  One wrong step results in a honey badger crawling through your chest. David is terrifying, as is his capacity for great evil. The movie flaunts the similarities between Katherine Waterston’s Daniels and Ripley, but decides not to push it too far.  She is a strong character that is forced to soldier on after horror and loss.  Danny McBride is a god damn treasure. He’s who you wish you could be in these movies, when you know you would probably be a Hudson. HUDSON! I liked Elizabeth Shaw in PROMETHEUS. I liked her character.  I liked that she wasn’t a cookie cutter Ripley clone. It’s sad that they felt they needed to ‘re-imagine’ the franchise by killing off all the remaining human elements from the original. I will say this… The biggest offense you can make in an ALIEN franchise is to kill off a main character between films. Especially if their death is pivotal in the transcendence of another character. Meh. I’m fine if this is the last ALIEN movie we get for a while.  The ending is heartbreaking and establishes a dark future for the universe. One ripe for the crew of the Nostromo to wander into.