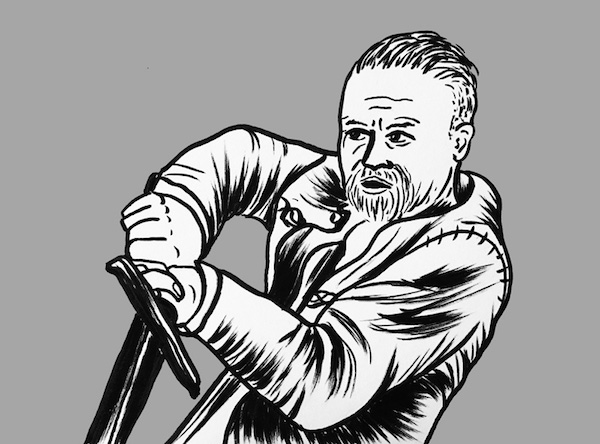 You never quite know what to expect going into a Guy Ritchie (THE MAN FROM U.N.C.L.E.) film, and this was doubly true of his latest picture because it is the first time he has tackled something as fantastical as the Arthurian Legend. KING ARTHUR: LEGEND OF THE SWORD is certainly a fresh take on the well covered legend as it maintains many key elements of the story while shifting and twisting others to create something more original.

I definitely have to give the writing team credit for originality, because this movie fuses traditional elements of the Arthur story with street smart attitudes that would not be out of place in modern London, and while this certainly added a level of fun to the film, it was one of the few things that did.  While I love King Arthur stories, this one left me rather cold because it failed to make me care.  There is too little time establishing a connection between Arthur and his parents, and his parents have very little character development, this results in their deaths lacking any significant emotional impact on the audience and makes it hard to care about anything that subsequently is supposed to be motivated by this.  I think the entire film would have benefited if they had just taken an extra ten to twenty minutes at the beginning to better establish these characters, but they didn’t and we are left with a mediocre plot device.  What you most end up caring about are the people at the brothel, but they quickly get written off or fade into the background, further removing you from caring about what is going on.

As far as production values go, the film looks fantastic, but it borrows a little too much from other modern fantasy films while not taking enough time to flesh out its own mythology which leaves you a bit cold.  The movie opens with giant war elephants attacking Camelot, and it feels like a cheap rip off of THE LORD OF THE RINGS: RETURN OF THE KING, which was instantly off-putting.  Once you get past the borrowing, there are some fun original elements, like the great portrayal of the odd creature who lives under Camelot castle, the scythe wielding dark rider, and  the mythical world Arthur is sent to train in, and I was left wanting to see more explanation and development of all these things but was never given it.

The camera work was well handled, with stylized action sequences that were a treat for the eyes and plenty of creative angles and interesting panning shots to keep you visually engrossed.  I found the color palate of the movie quite interesting, as almost all of the characters and locations are rather drably portrayed, which is a stark contrast to most modern fantasy, and while it didn’t detract from the film at all, I don’t know that it actually added anything.  One thing that did catch my eye was the fantastic use of montage, particularly as Arthur grows from a boy to a man.  The quick cuts and short vignettes of events gives you a clear impression of his youth and what he learned and values while quickly moving the story significantly forward in time, very impressive.

KING ARTHUR: LEGEND OF THE SWORD boasts an ensemble cast of talented actors, and the performances were definitely the best part of the film.  Charlie Hunnam (TV’s SONS OF ANARCHY) takes on the role of Arthur, and he is pretty damn fun as the young royal.  Arthur is a man who has his life taken from him twice and is thrust into situations that he would rather not face, nonetheless he rises to meet them and on their terms, and Hunnam does a solid job portraying this, taking the character from a street running young man and transforming him into a strong military strategist and leader.  Hunnam delivers his lines with almost too perfect timing and inflection and manages to make the character fun and likable despite the lackluster story, which is notable.

Taking on the role of The Mage is Astrid Berges-Frisbey (PIRATES OF THE CARIBBEAN: ON STRANGER TIDES) and she does a decent job with the part.  The Mage operates as a guide and trainer to Arthur, but they just don’t do much to develop her character, so while Astrid is perfectly capable in the role of the stern, young magic user, she doesn’t get enough of an arc to really let you see what she can do.  Taking on the part of Vortigern, Uther’s evil brother, is Jude Law (THE GRAND BUDAPEST HOTEL) and he does a solid job with the role.  Vortigern is an underhanded man who usually uses others to get what he wants while he sits in the back, and Law effortless brings this to the screen by giving him an aloof manner that screams arrogance and superiority.

Djimon Housou (GUARDIANS OF THE GALAXY) is one of the most underrated actors working today and it is always a pleasure to see him.  He takes on the role of Bedivere, the head of Uther’s army and leader of the resistance, and while we don’t get a whole lot of him, he radiates a powerful presences that steals scenes and makes you unnaturally curious to know more of Bedivere’s story.  Lastly, Aidan Gillen (GAME OF THRONES) takes on the part of “goose fat” Bill, the right hand man of Bedivere.  Bill is something of a scoundrel and a loose cannon, and Gillen nails this, giving him the right mix of wit and guile to make him one of the more memorable supporting characters.

While I wanted KING ARTHUR: LEGEND OF THE SWORD to be good, it was too fractured to keep my interest.  The story is poorly handled, it borrows too much from other films, and while the performances are fun, the actors often don’t have enough to work with to really shine through.  This movie could’ve been salvaged had it taken more time to flesh out the characters and really allowed you bond with them, but it just comes off as rushed and pointless.  If you’re still curious about this movie I would recommend waiting for it to come to your streaming service of choice, because it certainly won’t be staying in theaters long.