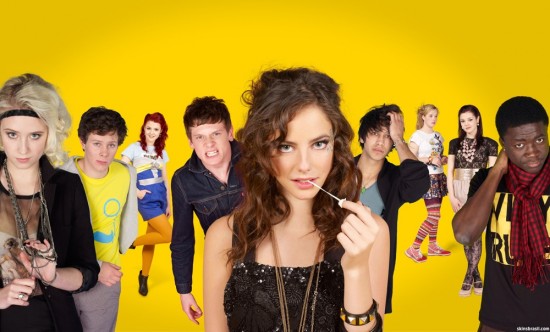 SKINS is a British teenage drama that was created by Bryan Elsley and Jamie Brittain, who also happen to be father and son. While SKINS can be classified as a teenage drama, it is so much more than that and does not deserve to be brushed off as just a British 90210.

Since this show was initially aired on British TV there are not nearly as many censorship issues as we have here in the states. The characters in this show curse as if they were living in DEADWOOD, fight each other to a bloody pulp, and frequently appear in their birthday suit. 90210 this is not. I admit when I first heard of this show it did not seem like something I would enjoy. I am over 25 years old and am probably not the target audience this show is reaching out towards. Let me tell you right now that I could not have been more wrong. There is such a diverse array of characters that I am sure that anyone out there, regardless of age, will find someone or some issue to relate to here. An while there are a lot of drugs being used in this show, it is by far not just another drug comedy that it seems to have been labeled (rightfully so knowing the title of the show). That said, I think we as an audience should not judge this book by its cover and dive into a wonderful show that is full of real and dynamic characters that I have come to love.

The thing I like most about this show is that it is really about kids coming of age and is set during a time in our lives when we grow up a little bit and learn the hard lessons of life. Also, the structure of this show is magnificent. Each episode focused on one specific character and we get a chance to see their perspective and often learn new and memorable things about them that shed light upon why they act the way they do. You may discover that a character you do not like initially will have a redeemable characteristic discovered in his or her themed episode. Every character interacts with the others in their respective episode, but the main focus and story is about their interactions and life journey. I have to say that structuring the episodes like this really makes this show unique and stand out. There are various writers for this show and I often found myself thinking how great the writing was throughout all of the 3 seasons I have seen thus far. I can not think of a single episode I did not enjoy. That is rare in television these days.

I really wish I could spend more time writing about each and every character and why I love them so much, but that would spoil the fun of this show. The first and second season of this show has the same cast and season 3 and 4 (I have not seen 4) introduce a whole new set of characters, issues and insecurities. I fell so in love with the cast from seasons 1 and 2 that I convinced myself that an entirely new cast was the worst idea ever. But I will admit that after I gave season 3 a chance, I almost want to say I like the new cast even better (almost). And to be fair, there are a few minor characters from season 1 and 2 that make it into 3 such as Effy, who is the younger sister of Tony from seasons 1 and 2.

Not a whole lot of people know about this show and I simply cannot recommend it enough. I consider it one of the best TV shows I have seen and sometimes caught myself comparing it to another favorite of mine, FREAKS AND GEEKS. I often found myself (especially in season 3) on the brink of tears while learning about these kids struggling to fit into their crazy worlds. The characters are real (and these young actors are fantastic), the issues are universal and interesting, the soundtrack is amazing, and the stories are told wonderfully. You all owe it to yourself to check out this great hidden gem of a show.

As of now, the show can be watched free through the Netflix streaming service. Each season has ten 45 minute episodes so it will not be hard at all to catch up! You MUST was this show in order and not skip around. They all blend together so well and you would be doing yourself a disservice by just watching and episode here and there sporadically. So far they have seasons 1-3 up and season 4 is on it’s way to Netflix streaming January 2011. I hope you all like it as much as I do! 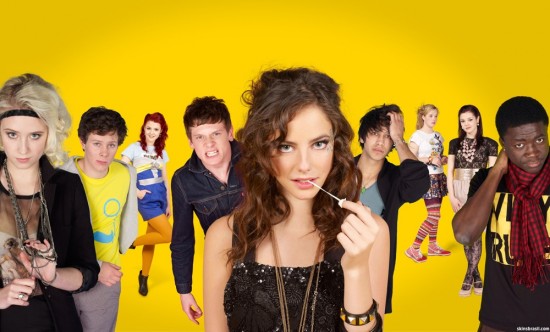