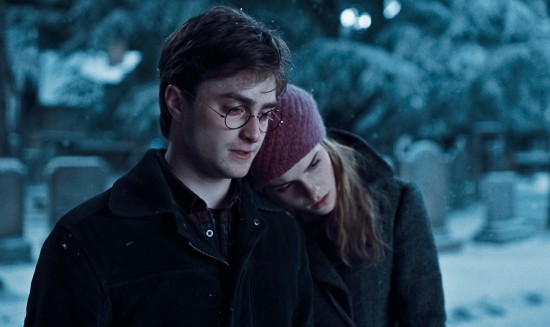 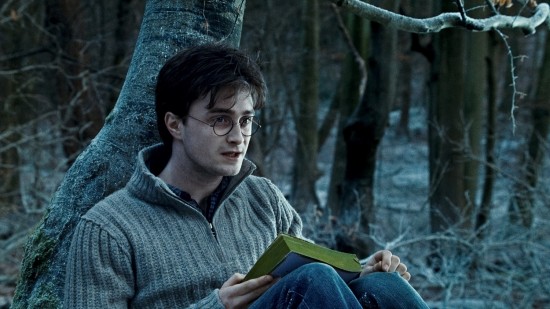 HARRY POTTER AND THE DEATHLY HALLOWS: PART 1 is the 7th movie in the blockbuster hit franchise and is based on the first half of the 7th novel written by J.K. Rowling, who is likely richer than Oprah at this point. One could say she is “Rowling” in the dough! Alright, now that my allotted (one) amount of bad puns are spent, let us get on with the review!

I feel I must admit here that I have not fully read a single Harry Potter book, so some of you out there (you know who you are) may think my opinions are useless. I have, however, been a loyal fan of the films ever since the first one hit theatres back in 2001. I have thoroughly enjoyed each adventure thus far and will see it to the end in the theatre before venturing into all of the books. So you are reading a review from someone who adores the movies, has not read the books, and is strictly reviewing based on the merits of the film itself, not constantly comparing the film to the books.

This latest installment is a somewhat tricky one to review because we are essentially watching half of a movie. As the “Part 1” implies, this is just the first half of one story. Many things can be jolting as an audience member with this in mind such as pacing issues and an obvious lack of conclusion. While both of those elements affect this film to a degree, I was still captivated from start to finish and had an overall positive experience at the theatre.

The story begins with our three heroes Harry Potter (Daniel Radcliffe), Hermione Granger (Emma Watson), and Ron Weasley (Rupert Grint) continuing their commitment to find the last of the “horcruxes” which are pieces of Lord Voldemort’s soul needed to defeat him once and for all. The tone is set quite early in this one when we see the majority of the good guys meeting up at Harry’s to help aid him in his task and protect him from evil while doing so. While all the Potter films before were mainly set at Hogwarts (their school for magic), it is clear from the get go that this film is not like the others.

Not having this movie based at the school creates a distinct new direction and tone for the film. We are in a much darker place than before now that the schools secrets are all unraveling and our characters are all confronting their destinies. The film is not full of students running down the halls of Hogwarts, no new spells being taught, no new teacher to bug the students, no more Dumbledore giving the kids the guidance they need, and no more school walls to keep the kids confined and safe. We are now in the open world where our three heroes must use what they have learned from the past in order to survive the future. All the other main players of the Potter films that we see in the opening take a back seat quickly in order for the focus to lay on Harry, Ron, and Hermione. This all creates a much more down-to-earth film that creates more realistic characters and motives.

Our three main heroes are growing up (literally) and on the run trying to find all the necessary elements needed to defeat evil and protect themselves. Seeing these kids grown up and facing new, more mature, challenges is something that longtime fans have been waiting for. Harry struggles with life on the run and we have a lot of scenes with him discovering that he is in quite the predicament. He must deal with his insecurities about himself and his purpose. We see Ron fighting internal battles with himself and his jealousy/envy towards Harry. Hermione is doing what she does best by helping the other two get what they need and it is good to see the other two boys finally admit just what a help she really is. Hermione has always been wise beyond her years and it is on full display in this film. The actors themselves have also done a wonderful job in this film and their talents on screen are most evident in this installment. I truly can not wait to see what these talented actors and actress have in store for us in the future. They have grown up into mature young adults during the filming of these movies and seeing them at their most convincing in this film was a treat. The all-around cast and main players in this film are simply superb.

We are treated to a handful of excellent actions scenes (mainly at the beginning) that really do put you on the edge of your seat. The special effects on display are as dazzling as ever and I found myself in awe of some of the spells being cast. I admit there should have been a little more action to keep up the pacing from the beginning, but what we get instead is a little more character development than previous films and that is welcome. Also, I am assuming the majority of the action is going to be saved for the final installment. We are also treated to a wonderful little animation about midway through this film that tells the story of the deathly hallows told by Hermione. While one may possibly assume that an animation placed smack in the middle would hurt the pacing, it actually fits quite well and is a beautiful piece of animation that helped clarify a major story element. While the final moments of the film are captivating, they are not nearly as awesome as the finale of previous Potter films that had that pesky conclusion I mentioned earlier. I do understand they had to cut the movie off somewhere, and I definitely am wanting to see more as soon as possible. So in that respect, they did a good job cutting it where they did.

I really do not have much to complain about with this film besides it just being half of a film. I can only imagine how awesome this movie will be when complimented by its (hopefully) better half. The characters are well developed and convincing, the new darker tone is welcoming, the pacing can be exciting and fun, and the action is fun and entertaining. The movie runs at about two and a half hours and it will seem like a breeze, which is a good thing. This is not the typical adventure and formula you expect from a Potter film. Instead what we have here is a more mature look at characters growing up and confronting their problems together. That is something I can admire about this film and I can not wait to see how this story unfolds and concludes this summer.