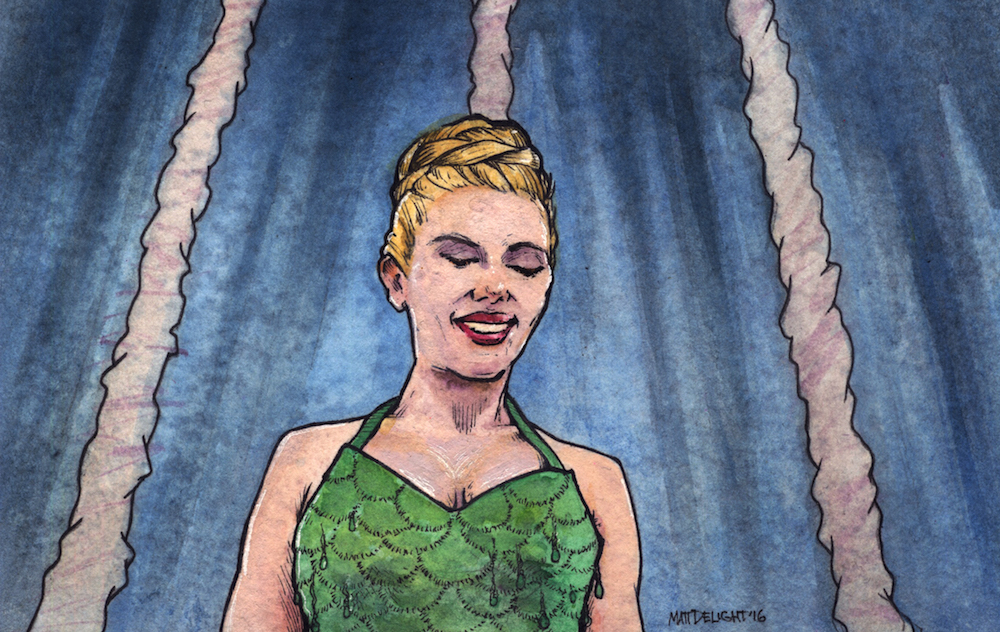 Ethan and Joel Coen (INSIDE LLEWYN DAVIS), most often referred to as simply the Coen brothers, have a unique cinematic sensibility that people tend to either love or hate.  I am of the former group as I thoroughly enjoy their demented antics and quirky characters, and their latest cinematic offering HAIL, CAESAR! is chock full of both.  The movie is a glorious send up and love song to the golden age of Hollywood and it centers around Eddie Mannix, head of production and something of a bag man for Capitol Pictures, a giant film studio complete with the all the sound stages that were the hallmark of old hollywood.  Mannix is torn as he is being pursued by the Lockheed corporation who want him to take on a high level executive position, but he just doesn’t know if he can give up the picture business.  As part of his day to day operations he casts a young western star in a drama at the studio head’s request, which is so disastrous it brings on the ire of premier dramatic director Lawrence Laurentz, must find some sort of a solution to a starlet’s out of wedlock pregnancy, holds a roundtable discussion with religious leaders to make sure a new picture won’t offend them, dodges nosy reporters, and checks the dailys.  However, everything gets a bit haywire when his top star and leading man of the studio’s premier picture, Hail, Caesar! (which is just one delightful example of this movie’s use of films within a film) gets kidnapped and is being held for ransom by a group of disenfranchised and crusading former script writers.

Hail, Caesar! is as delightful as it is ludicrous, and it is in no small part due to the genius of the Coen brothers who tackle not only directing, but writing, producing, and editing duties as well.  The movie has a perfect old hollywood look, but what really makes it shine are the moments when you are seeing part of one of Capitol Pictures’ movies within the movie; the movement of the camera, the framing, the credits, and the costumes all look perfect, eliciting a genuinely nostalgic and delightful feeling that is also a bit twisted as they clearly poke fun at the overdone style and character tropes that were hallmarks of many of the films to come out of hollywood’s studio system at the time.  Outside of the movies within the movie, the costumes are pure 1950s, the characters are often caricatures of hollywood legends, and the story covers so many shady behind the scenes rumors and scandals from the golden age that you may go dizzy trying to keep up with all of them.  I should also mention that almost everything in this movie is simultaneously an homage and poke at classic hollywood, and the fact that this remains solid through almost every aspect of the movie is awe inspiring.

While HAIL, CAESAR! has an excellent story, it is the nuances of the writing that really elevates it to the level of brilliance.  Nearly every named character in the film is distinctly memorable, and this is due to them having individual idiosyncrasies that cement them in your mind.  A few examples are the Thacker sisters and their proclivity for mentioning their readers, Hobie Doyle with his near continuous cowboy schtick, and DeeAnna Moran with her harsh tone and abrasive language.  Giving every character something unique and then extrapolating it to create hilarious interactions that play out as nice and neat as any classic hollywood comedy would be a difficult task for any writer, but the Coen brothers make it look easy and by the end of the film your mind is so awash in memorable moments that it is hard to focus on any single one that doesn’t lead you straight into another.

The brilliant writing in Hail, Caesar! is only surpassed by the amazing performances that bring it to life.  Josh Brolin (INHERENT VICE) has a singular talent for playing strong, reserved characters, and he uses that to bring Eddie Mannix to life.  Brolin gives Mannix the right mix of stern boss and caring confidant, creating a man who is impressive, endearing, a bit goofy, but above all in calm control, he is a near perfect leading man for this picture.  Stepping into the role of Baird Whitlock is George Clooney (TOMORROWLAND) and he does a nice job with the role.  Whitlock is a man who is so accustomed to being a star and amongst other hollywood people that he has nearly lost touch with the rest of the world, and Clooney makes him as lovable and clueless as you’d imagine someone of that ilk to be, delivering a man who can captivate one minute and be utterly forgotten the next.  Up and coming actor Alden Ehrenreich (RUNNING WILD) plays Hobie Doyle, the cowboy star who the studio is hoping to transitioning over into a dramatic leading man.  Ehrenreich is brilliant as the stiff, cowboy turned actor who is a bit lost when it comes to the wider scope of acting and fame; he comes off far more charming than one would expect, and his acting talent is on display as he slowly reveals that Hobie has hidden layers of intelligence no one would’ve guessed at from first impressions.  Ralph Fiennes (THE GRAND BUDAPEST HOTEL) delivers a brilliant turn as Lawrence Laurentz, Capitol Pictures’ top dramatic director.  Fiennes has a habit of playing intense yet reserved characters, and he uses that to add the right amount of power to Laurentz, who is driven to the end of his rope trying to mold Doyle into a moderately competent dramatic lead, while still keeping it formal and civil, delivering one of the most hilarious sequences of the entire film.  DeeAnna Moran, wholesome starlet on screen and razor edged good time girl off screen, is played by Scarlett Johansson (AVENGERS: AGE OF ULTRON) and she is terrific.  Johansson sounds nothing like herself as she delivers handfuls of attitude with a grating New York accent, additionally, she flips the script with just her expression, particularly her eyes, as she crashes from Moran’s on screen character back to her regular character, giving us a performance that is pure fun.  Lastly, Channing Tatum (THE HATEFUL EIGHT) is inspired as Burt Gurney, a song and dance actor for the studio.  Tatum shines in a hilarious musical number featuring sailors getting ready to head back out to sea, delivering fancy footwork and laughs by the barrel, and his turn off the set is equally impressive as his stern, determined demeanor strikes a sharp juxtaposition to his character’s on screen persona.

HAIL, CAESAR! is a comedic romp through the tropes of old hollywood, full of the kinds of idiosyncratic characters that made the golden age so memorable.  The Coen brothers combine stylized visuals, an engrossing story, and an all star cast to make a movie that deserves to become as much of a classic as the films that inspired it.  If you like classic movies, are a fan of the Coens, or like any of the actors in this film, then definitely check it out in theaters, you’ll be glad you did.