GUARDIANS OF THE GALAXY Movie Review 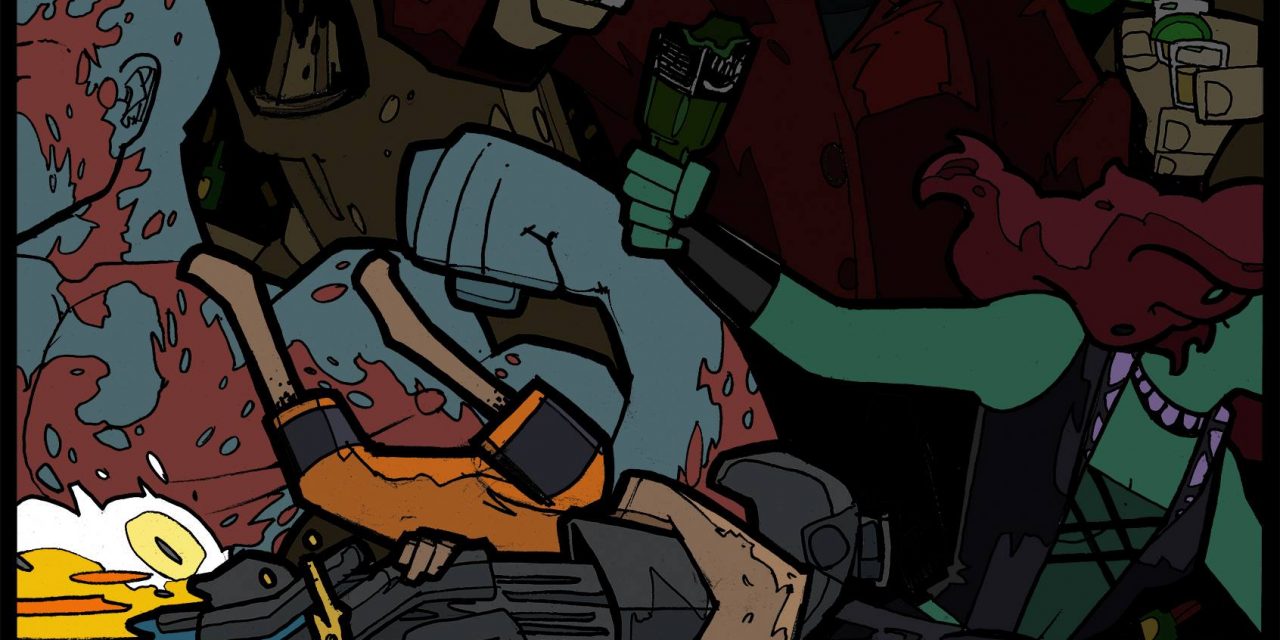 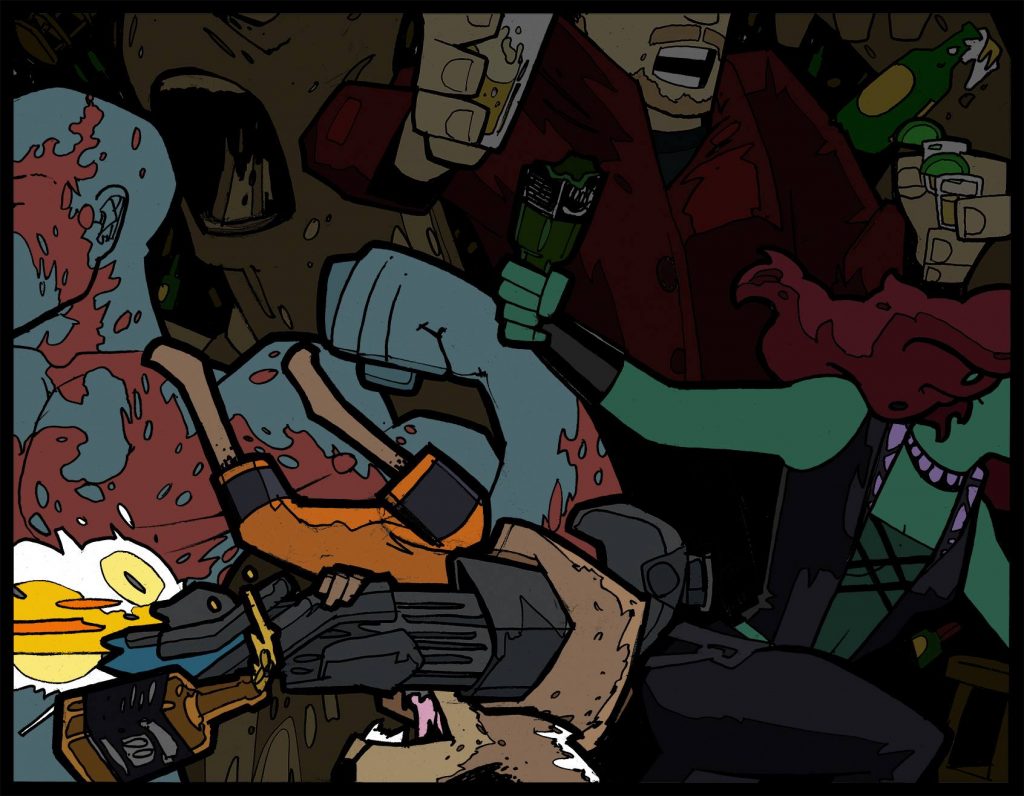 Ugachaka! Ugachaka! I can’t fight this feeling.  DEEEppppp inside of meeee.  Guardians you just don’t realize… what you did to me.

I knew this movie was going to be something amazing. I mean… I wanted it to be.  As months went by and we kept seeing the same ‘My name is Star Lord’ scene re-played over and over in each new trailer, I had this small fear that maybe that’s all this movie has to offer? Maybe Marvel reached a little too far with this movie about a ragtag collection of ‘losers’ set in a completely different galaxy from their already established Universe. NOPE. As the credits appeared on the scene, I cheered. I never cheer in movies. I stood up and cheered. It’s that good!  It’s the perfect 80s film that somehow managed to get released today. (How many songs can you fit on a cassette tape?) I was laughing like a crazy person in one moment, then drooling over some of the coolest space shenanigans I have seen in years.  Gunn has created a world that Del Toro would be proud to call his own. Oh man, I will definitely be seeing it again and again.

Shit. I probably should put that paragraph at the end of the review…? Screw it!  Not so much with the SPOILERS ahead. Here we go!

I don’t want to be one of those people who thinks every new Marvel movie is the ‘best Marvel movie.’ I tend to leave each one feeling like ‘Damn, Marvel.  You are crushing it!’ Each new one seems to improve upon the last, while simultaneously expanding the universe.  I’m pumped for what Marvel is doing and I can’t wait for AVENGERS 2. You’re probably wondering how GUARDIANS OF THE GALAXY fits into this primarily ‘Earth based’ world Marvel has created?  In a way, it doesn’t. Okay, it does. Thanos is the only thing that really connects all of these movies. (The big purple face at the end of AVENGERS) Also, The Collector.  Kinda. This movie shows you that the Marvel Universe is bigger than just the Avengers.  It’s bigger than just Earth. What GUARDIANS does do, is it captures the beauty and vastness of the Marvel comic universe. That there are more stories to be told that don’t always connect to the AVENGERS. While our heroes fight espionage and artificial intelligence back on Earth, there’s a small group of heroes, on the other side of the universe, trying to stop the end of everything. Independent and on their own.  That’s sort of how this movie feels. It’s a Marvel movie, but it doesn’t need those previous movies to justify itself.  It exist perfectly all on its own. With all of that being said, the question remains:  is GUARDIANS OF THE GALAXY my new favorite Marvel movie?  No. It’s one of my new favorite movies of all time. Yup. Period. Exclamation point.

GUARDIANS OF THE GALAXY begins with Peter Quill (Chris Pratt) being FIRE IN THE SKY-ed away from Earth by a small group of space scavengers, led by a blue Michael Rooker. Fast forward a bunch of space years, Peter is now a carefree space thief who likes fast spaceships and fast gals. Being a child of the 80’s, he resonates elements of Indiana Jones, Han Solo and Jack Burton (I half expected his ship to be named the Porkchop Express).  His one-liners are cheesy and you can’t help but fall for all of them.  He eventually crosses paths with Gamora (Zoe Saldana), who is on a mission to confront Quill and retrieve a mystical orb he has in his possession. #InfinityStones. Their ruckus grabs the attention of a couple of bounty hunters named Rocket (raccoon) and Groot (talking tree).  The whole lot of them end up in a space prison where they meet up with Drax the Destroyer (Bautista). Thus, the Guardians are formed. Realizing the orb is way more powerful than advertised, the Guardians spend the rest of the movie trying to keep it from falling into the maniacal hands of Ronan and Nebula. Perfectly orchestrated chaos and comedy ensue.

The one thing a lot of people were worried about was how relatable a talking racoon (‘what the hell is a racoon?’) and a talking tree (‘I am Groot’) would be in a major summer blockbuster?  Much like how a lot of folks thought Quicksilver was going to be one of the worst parts of X-MEN DAYS OF FUTURES PAST, everyone is going to be talking about how Rocket and Groot ended up providing some of the most enjoyable (and heartfelt) moments in the movie. Seriously, during their prison break out, Rocket has a joke that had the entire theater dying. Vin Diesel perfectly delivers each ‘I am Groot’ with such exceptional minute detail. Every line delivered perfectly fits the scene and resonates the point that Groot is trying to express. (Side note:  Check out the NEW X-MEN storyline ‘The Trial of Jean Grey’  for a really fun scene of Jean reading Groot’s mind and hearing the depth behind each ‘I am Groot.’) Bradley Cooper nails Rocket’s tone and sarcasm. Seriously, one of the movie’s most emotional moments doesn’t come from one of the ‘human’ leads, but from a drunk little CGI raccoon in an alien bar located inside the head of a giant Celestial. Also, Groot’s faces. SO GOOD. The fact that these two characters end up being so exquisitely handled, is just a testament to James Gunn’s outstanding grasp on this new Marvel universe.

While Rocket and Groot end up stealing a lot of the attention on the screen, Gunn makes sure to properly distribute the love equally among the gang. Chris Pratt is Star Lord.  A kid who was ripped from Earth after the death of his mother and got to live every boy’s fantasy of hot dogging through space. Everything he knows of Earth, he learned as a child. You can’t help but fall in love with Pratt in this film. As he dances through an ancient temple, you realize that this is the kind of hero you want in your summer blockbuster.  Flawed and charismatic. Zany and heroic. Bautista is the perfect Drax. He’s dangerous and emotionally damaged. He is definitely the ‘straight man’ of the group, who ends up getting a lot of the laughs. His comic timing is as fast as his reflexes. You fight along side of him and share his pain. Gamora is handled perfectly by Saldana. A strong female character whose importance never fluctuates throughout the film. She’s more than a potential love interest.  She is just as important as Quill and ranks equally among the team. Does the camera longingly linger on Gamora’s alien curves? Well… Yes.  At least it’s balanced out by a beautiful Bautista flexing, with his shirt off, for the entire movie. Lee Pace as Ronan and Karen Gillan as Nebula definitely deserve some praise for their character portrayals. Villains in movie can so easily be one dimensional, yet, these two somehow find away to give them a depth, even with their limited screen time.  All of these elements come together and result in one of the best films I have seen in years.

As you’re watching GUARDIANS, you can’t help but shake your head at the screen and think  ‘Is this really happening? ‘Thanos. The Kree. This is a massive Marvel space opera and it’s so damn good! GUARDIANS  is one of those rare movies where all the visuals dance across your eyeballs, while also whispering some of the most fluid storytelling I’ve seen in years. So easily, this film could have been jam packed with beautiful scenery and completely devoid of soul. It’s so much fun! I kept trying things to nitpick and I just couldn’t. The soundtrack legitimately narrates the movie and works so well.  If you took apart the movie, you would see that it’s plot is pretty basic. But, the realism of the characters and the comedy sprinkled over it seem to elevate it to a new level. This is a new type of origin story. The movie throws you into this alien world and doesn’t spend much time setting it up. Peter Quill grew up in space, so, every outrageous new thing we see is just accepted.  You’re in it.  There are no non believers or characters that need to be brought up to speed.  Everyone knows this world and it’s only the details that need explaining.  It’s a racoon with a gun, fine.  It’s a self aware tree, cool. In a world where every new SPIDER-MAN and BATMAN movie has to spend 30 minutes explaining who the character are, it feels so damn good to have a movie just get into it and go. James Gunn created something amazing here and you will definitely be impressed.  It is clear that Gunn poured his soul into this movie.  Every character is alive.  This world exists somewhere in the vastness of space. It’s rare that a movie lives up to the massive hype I build up in my silly little brain. Not only does this movie live up to it, but, it blew past my expectations. Now, shoot the Hulk into space and have him join up with the GUARDIANS for part 2.

No raccoons or tree people were harmed in the writing of this review.