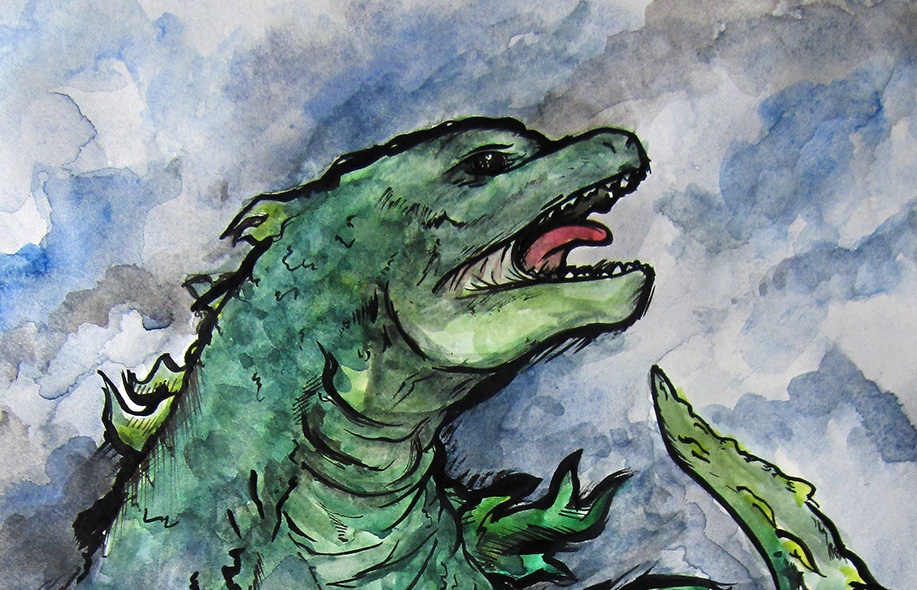 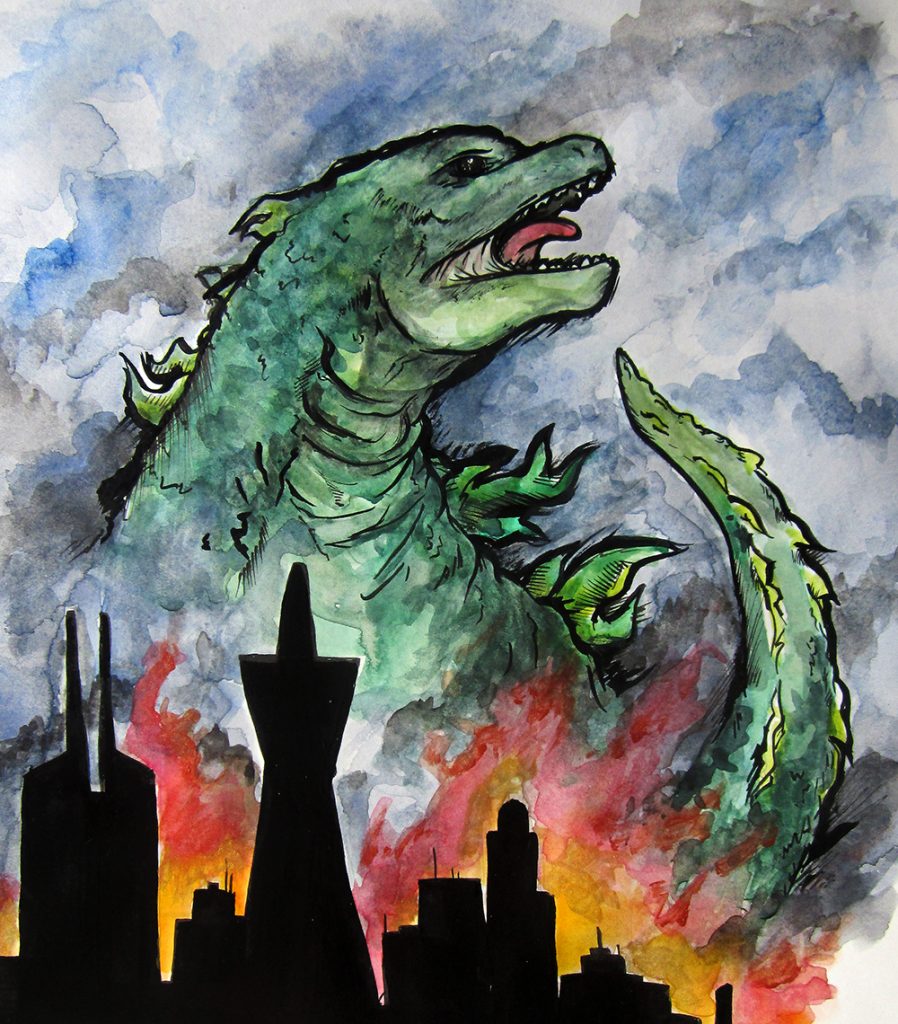 Yes, it is something of a slow burn in the new GODZILLA reboot until the big guy himself shows up.  Yes, there is a human narrative running parallel to all the destruction and monsters punching each other.  Yes, there is only one or two big battles that we see in their entirety amidst a few slower and quieter moments.  But, man oh man!  It is glorious and well-earned Kaiju fun when we finally arrive at that point in the movie.

Director Gareth Edwards (MONSTERS) isn’t out to make a PACIFIC RIM knock-off.  As much fun as it is to see giants knocking each other around for two hours, the Godzilla franchise has (for the most part) been adept at building up your anticipation for the main event in the last third of the film.  Edwards pays homage to that tradition while also developing a story about nature gone awry and mankind struggling to keep up or else be wiped out in the crossfire.  The promotional material would have you believe that Godzilla serves as the story’s antagonist when, in actuality, he’s more of a heroic figure…at least as heroic as a monster who can crush a city with a sneeze can be.

Honestly, Godzilla is something of the lesser of three evils as it turns out he is hunting a pair of monstrous parasites dead-set on devouring nuclear energies around the globe and destroying any cities in their path.  It’s a staple straight out of the Godzilla movies of old I remember seeing as a kid such as GODZILLA VS. GIGAN (the creatures actually look very Gigan-esque with a heavy CLOVERFIELD influence).  Indeed, the design work on the creatures and Big G are spellbinding on the big screen.  Godzilla maintains a very traditional look, but does not appear too animalistic and actually embodies quite a bit of emotion and character despite having no dialogue outside of roaring.  And when he first cuts loose his infamous bellow, brace yourself.  It’s pretty epic.

Now on to the aspect of the film I’ve heard nothing but polarizing opinions on since its release: the human element.  Honestly, these characters work for me.

Now, you might be wondering how I can enjoy the story arcs of the human supporting cast of GODZILLA while admonishing the humans present in, say, the TRANSFORMERS franchise.  Well, for starters…these characters are actual characters and not annoying comic relief taking screen time away from our titular heroes.  I’ll take Aaron Taylor-Johnson (KICK-ASS 2), Elizabeth Olsen (OLDBOY) and Ken Watanabe (INCEPTION) churning out decent performances in stock roles over Shia La-“I’m Not Famous Anymore” stammering and shrieking as Sam Witwicky.  It goes without saying that Bryan Cranston (BREAKING BAD) steals the show as Taylor-Johnson’s estranged father who raves and obsesses over a conspiracy to cover up a nuclear meltdown in Japan that claimed the life of his wife.  His character has the most well-rounded arc and Cranston is on his A-game with conveying the torment he’s going through.  It’s just a shame that he is not in the film longer as I was genuinely invested in following his story a little longer.

But despite a lack of Walter White in the last two-thirds of the movie, none of the human characters feel unnecessary or unwanted. I invested in Taylor-Johnson and Olsen’s relationship as husband and wife (a dynamic that may seem creepy when compared to next year’s AVENGERS sequel when they will be playing brother and sister).  The military characters did not come off as overly-stereotypical or over-the-top.  Ken Watanabe completely sells me on his scientist character who has nothing but utter awe and respect for the might of a creature such as Godzilla.  Nay-sayers seem to conveniently forget that these supporting players have been a longstanding trope of these films and that following the escapades of a giant dinosaur with nuclear fire breath is fairly hollow without factoring in the human perspective.

At the end of the day, seeing Godzilla taking care of business up on the big screen again is worth all of it.  Those of you out there who may feel uncertain about seeing the film due to a slower and more deliberate pacing and the prominent human characters…don’t you fear.  The second the King of the Monsters lets loose his assault on his prey, all of your anticipation melts away into excitement and nostalgia.  If only the filmmakers had incorporated some lyrics from Blue Oyster Cult’s “Godzilla”.  Then this would have been perfect.