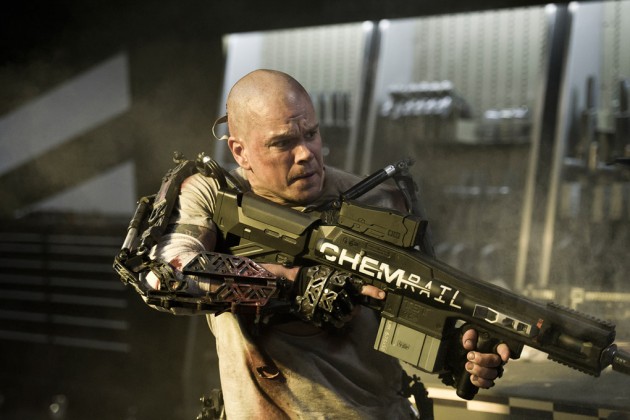 The year was 2009 when a modest Sci-Fi film directed by an unknown quantity grabbed the movie world in the throat by earning more than its budget back within the first three days. What followed was a total love affair between the movie geek world and the little South African film that could. It came out of nowhere, was set in a foreign land and starred actors very few had heard of. Thanks to Producer Peter Jackson (THE HOBBIT) who saw something special in Neill Blomkamp, the world has DISTRICT 9. Accumulating a $210 million worldwide gross and four Academy Awards nominations (including Best Picture) meant that Mr. Blompkamp’s next project would be highly anticipated and developments scrutinized for days. Today we find ourselves with, at long last, a trailer for his followup: ELYSIUM. The film stars Matt Damon (BOURNE TRILOGY) as a poor Earth dweller given little time to live in the year 2154 where the richest and most elite live on Elysium, a man made space station. There is no cure for Damon’s terminal illness and faced with nothing to lose he makes for Elysium where he knows a solution exists. What follows is a man-against-all-odds thriller set in a futuristic world where you can bet a ton of stuff will explode. Let’s get a taste of things to come.

Blompkamp was allegedly given a $120 million budget (that’s four times his previous film) and in this trailer it shows. The film looks epic in scope. There will be huge helicopter shots with tons of extras. It looks beautifully shot and you can bet your rear there will be a lot of action. Damon puts on a sort of Mech Warrior type suit (much like in DISTRICT 9) that will probably once again render those in its path into goop. The most interesting thing about the trailer (aside from what will probably be very interesting visuals — given the director’s previous film) is the inspired casting as Jodie Foster as the baddie. Those that have seen Spike Lee’s INSIDE MAN can attest to how well she can play an icy filthy rich antagonist. Hopefully, she’s given more to do in ELYSIUM than in that film but her presence alone has me excited. There wasn’t much Damon acting in the trailer but he is a fine actor and his resume shows that he can carry an action film.

The most genius of strokes in this trailer, however, is the latter half when the action picks up and stuff blows up but the score and overall sound are very subdued distilling a sense of serenity in the proceedings. It doesn’t manipulate the audience into full action-mode. Let the film do that on its own. Consider me looking forward to this one.

ELYSIUM orbits a US theater near you August 9th, 2013