FROM UP ON POPPY HILL Movie Review 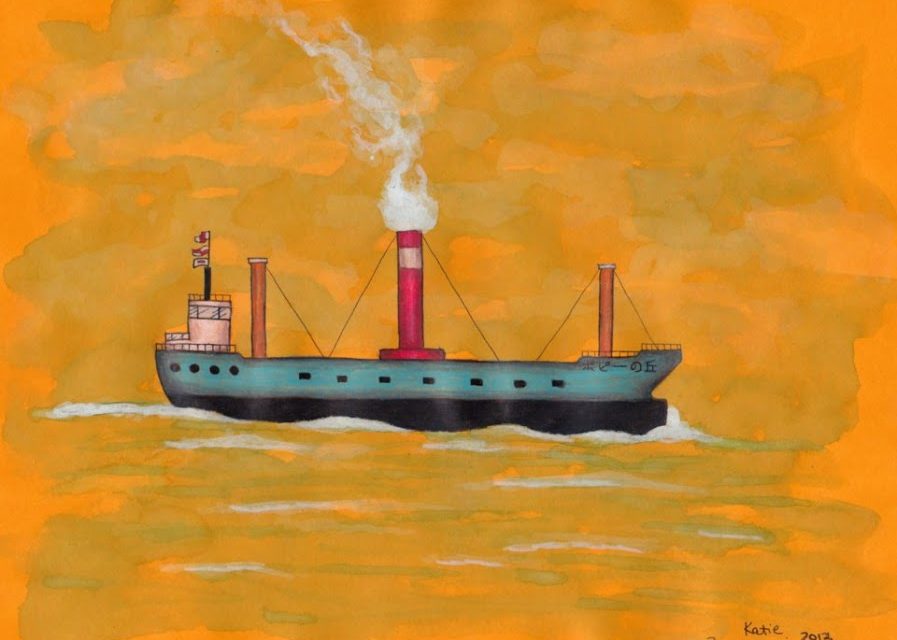 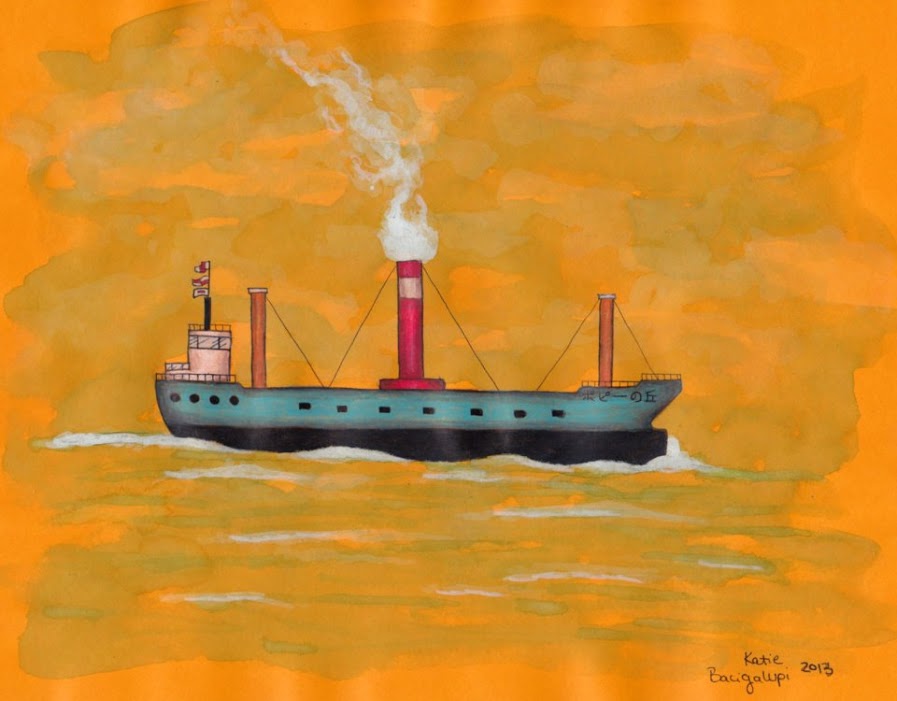 Some critics believe that you should approach whatever you are going to critique without expectations, and while there is definitely some merit in that concept, at times I find it difficult to do in regards to movies; thankfully, when it comes to Studio Ghibli, my expectations are almost always exceeded by leaps and bounds and that is certainly the case with FROM UP ON POPPY HILL. While Hayao Miyazaki (HOWL’S MOVING CASTLE) co-wrote the script (along with Keiko Niwa; THE SECRET WORLD OF ARRIETTY) and was involved in planning, directorial duties were handled by his son Goro Miyazaki (TALES FROM EARTH SEA) who is quickly proving that he is just as talented as his father. The movie takes place in 1963 and centers around Umi Matsuzaki, a high school girl who lives at, and helps run, her grandmother’s boarding house overlooking the Port of Yokohama. Between school work, cooking for the boarders, and watching over her younger siblings, Umi doesn’t have much time for personal activities, but she does make a point to raise signal flags in the yard every morning. Things begin to change for Umi when she crosses paths with Shun Kazama, a publisher of the school newspaper located in a dilapidated building known as the Latin Quarter. Before Umi knows what’s happening she is helping make publications and joining forces with the other club members to try and save the Latin Quarter from destruction. I wish I could go into more detail without giving out too many spoilers, but everything is so intertwined in this movie that to give away any more plot details would certainly ruin some of the charm of the picture. 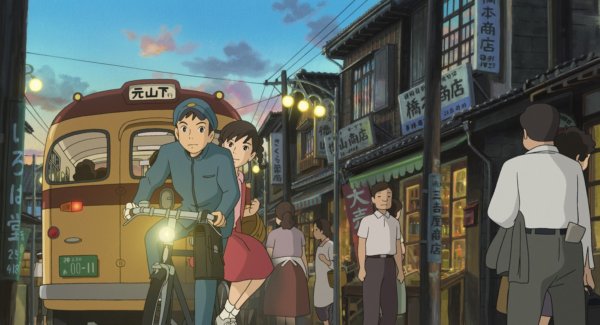 The art and production quality of FROM UP ON POPPY HILL are top notch. The backgrounds are stunningly beautiful and can easily suck you in and distract you from what’s going on in the film, it is almost like watching a moving impressionists gallery, thankfully they balance the more gorgeous panoramic backgrounds with traveling or transition scenes so it heightens the feel of the movie rather than detract or distract from it. The design and depiction of the people is more simplistic than many other Ghibli movies, but I found it enjoyable and see it as Goro wanting to distinguish his style from his father’s while still maintaining the overall impression people have come to expect from the studio; In fact, while the movie very much feels like a Ghibli film, it also feels more akin to modern day anime features, as if Goro is trying to fuse the unique artistic style of his father with the more streamlined look of mainstream anime. The only issue I had with the production side of things was that there were two specific scenes where Umi’s legs didn’t seem to be moving in a natural way while walking, but apart from that all the animation was great, always very fluid and inline with how people and objects move in real life.

When it comes to Anime, there are many purists out there who prefer to watch the movies in their original language with appropriate subtitles, and for any of us who have ever seen a particularly awful English dubbing, it is hard to disagree with them. However, Studio Ghibli has continually sought out exceedingly talented writers to adapt their movies into English, and this practice has once again paid off with FROM UP ON POPPY HILL. For this English adaptation, Ghibli turned to veteran screen writer Karey Kirkpatrick (THE SPIDERWICK CHRONICLES) who previously worked with the studio on the English adaptation of THE SECRET WORLD OF ARRIETTY. I don’t know whether having previously adapted a Miyazaki/Niwa script made the task easier the second time around, regardless, Kirkpatrick delivers a wonderfully subtle story that intertwines love and coming of age against the backdrop of a modernizing post war culture that is conflicted and confused over its past. The best compliment I can give Kirkpatrick is that FROM UP ON POPPY HILL is a very Japanese story, even when done in English. 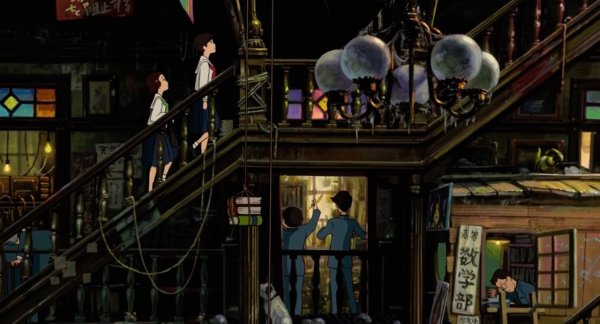 No matter how great a script is, it won’t do much without a talented group of performers to bring it to life, and the English cast for FROM UP ON POPPY HILL is a wonderfully eclectic mix of talented actors. Sarah Bolger (TV’s THE TUDORS) provides the voice of Umi and was a great choice since she has had plenty of experience as an actress but is not yet so well known that her voice is easily recognizable and distracting. Shun is voiced by Anton Yelchin (TERMINATOR SALVATION) and he continues to prove his talent as not only a voice actor, but simply as an actor. His ability to handle the complex emotions of Shun with merely the pitch and delivery of his voice is very impressive. While the two leads in the movie are up and comers, FROM UP ON POPPY HILL also boasts a slew of more well known actors so keep an ear out for Gillian Anderson (THE LAST KING OF SCOTLAND), Aubrey Plaza (SAFETY NOT GUARENTEED), Christina Hendricks (TV’s MAD MEN), Jamie Lee Curtis (TV’s NCIS), Chris Noth (TV‘s THE GOOD WIFE), Bruce Dern (DJANGO UNCHAINED), Ron Howard (TV’s ARRESTED DEVELOPMENT), and Jeff Dunham (DINNER FOR SCHMUCKS). The great leads and the fantastic supporting cast of voice actors give us an auditory experience that is almost as beautiful as the visual one in FROM UP ON POPPY HILL.

Even though Studio Ghibli films are released by Disney in America, they continually fail to reach the levels of success films made by their American counterpart enjoy, which is a tragedy since Ghibli films are true works of art that can be enjoyed by all audiences. If you want to see a gorgeous film with an equally beautiful story, I encourage you to seek out FROM UP ON POPPY HILL while it is still in theatres; you may have to travel a little to find a place it is playing at, but it is well worth the time and effort.