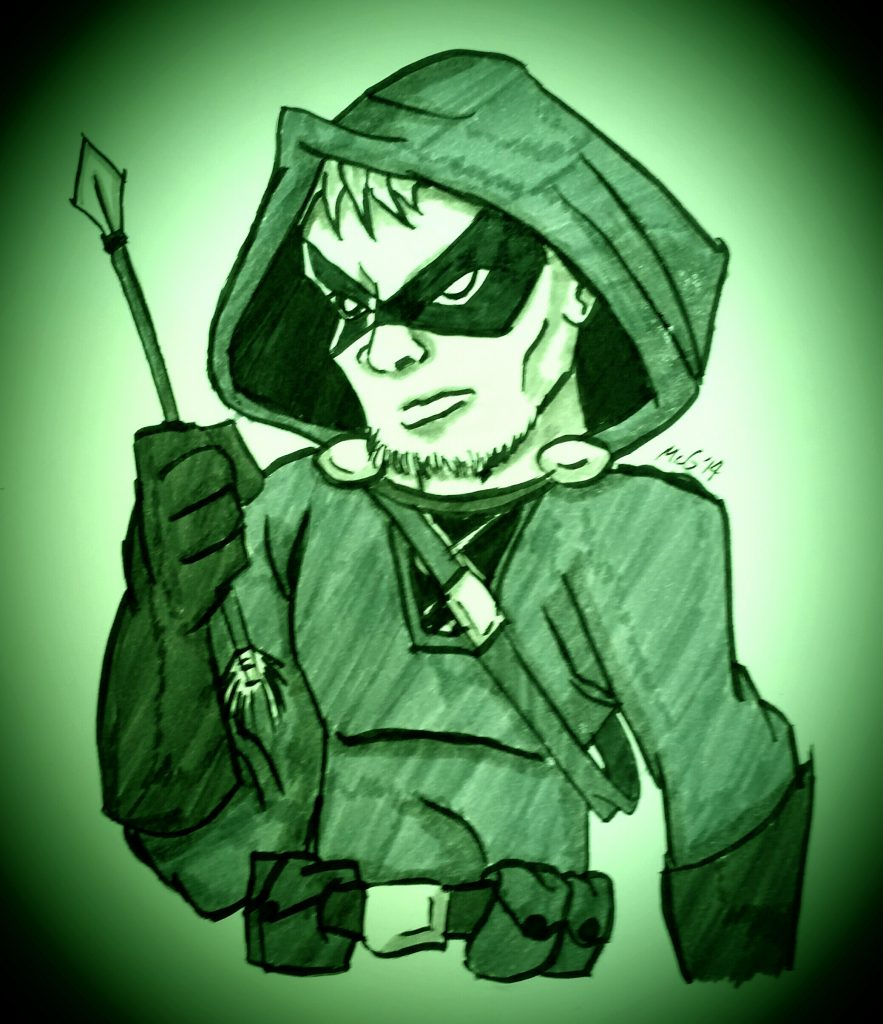 Ya know, I thought I loved Season One…but…but, it was as if Samuel Jackson broke into my apt., turned me upside down, paddled my ass stupid, and whispered in my ear,”hold on to your butt.” As we then made Newman’s microwave popcorn, smoked some grass cigarettes, and together, hand in hand…we watched Season Two. The third eye is now open. Brothers and sisters, lemme tell you something; CW’s ARROW is, without question, the comic book action adventure show that I’ve been waiting for my entire life. Hallelujah!!!

I mean, of course it is!!! SPOILER ALERT! It’s a season that begins with a bang, and ends with the unthinkable. Literally! It begins with the Major of Starling City getting murdered by machine-gun wielding ‘vigilantes’, and ends with 40 thieves turned rouge Frankenstein snapping hella necks. Leveling the city with only with their fists. So cool.

For the uninitiated, Season One of CW’s ARROW ends with the death of Oliver Queen’s best friend Tommy (Oliver Queen being, ‘The Arrow”, for the really uninitiated), and large parts of Starling City being destroyed by an earthquake-inducing device.

Season Two continues on with these ideas…with a vengeance! The death of Tommy gives Oliver reason to reconsider all the willy-nilly murdering he’s done in the past. Accepting the fact that he’s made hella mistakes. He’s a cat on a path. On the way to becoming the true meaning of superhero. The destruction of Starling City however, causes not just a gang war. It’s also the chaos in which Alderman, Sebastion Blood, (who, just so happens to be the wicked nutty-coocoo villain Brother Blood.), decides to run for Major.  His main opposing candidate, of course, being Moira ‘Oliver’s Mom’ Queen. Who just got out of jail, and is now running for office.

I know, that’s kind of a lot. And, for any other show, that would probably be more than enough. And, ya know what…just between friends… I woulda been perfectly stoked with a season two about rebuilding a city in the midst a turbulent China White and ‘The Mayor’ turf war. Ya know, maybe a cameo or two. But, come on Boy-yo! This is the CW’s ARROW!!! You jockin’ me. Why, I think they have only just begun.

Now, would you believe that ol’ Season One earthquake cracked a hole in the Starling City prison. Well, it did. Apparently, freeing only THE worst, bat-snot crazy dangerous, lunatic villains that said prison/Season One had to offer. Which, just so happens, draws the attention of A.R.G.U.S. (ya know, DC’s version of S.H.I.E.L.D.) who seem to be gathering recruits to form some sort of ‘Suicide Squad’. The earthquake, aka The Undertaking, is such a plot event that it even brings the Black Canary. She’s in town, because apparently, she’s all worried about her family. However, as it turns out, she was trained by…get this… the League of Assassins. And, once yer a Leaguer, yer a Leaguer for life. Know what I’m saying.  …Speaking of training, did you know that Oliver was trained by one Slade Wilson? (aka…Deathstroke the Terminator.) Who seems to have a mad-on for murdering Oliver/ruining his life, and brought a floresant serum that makes Solomon Grundys outta nobodies.  (Uh, So yeah,  it turns out that wasn’t Deathstroke in Season One at all. Awesome, right! FYI.) And that’s seriously, still just the half of it.

It’s everything that Season One was…but quote the Idol, just “more, more, more.” Still, the mind bending, uplifting musical scores by Blake Neely that make you want to fight crime, and have feelings.  The costume design by Maya Mani is beyond spot on (I seriously could not imagine a more wizard fingery Deathstroke. So sick.). Totally dope character cameos that seem to come out of nowhere. (That, I actually don’t wanna spoil.)  Characters that are actually characters, that also stay in hella character. (Take that Agent’s of S.H.E.I.L.D.) The villainous double entendres enjoyed by Wilson/Blood. Lines that make you shake your fists, and curse their name. Diggle and Felicitie’s crisp, and culturally observant Whedon-esqe banter; clueing you into the idea that these are our people. That, we too, could be a part of Team Arrow. If only things were just a little different… (Like, we all lived in a T.V. show). Kidnappings abound!!! Still they remain a persistent problem, always motivating the story. Thea, in particular, always seems to get caught up in the web of some villianous chair.  I just blame that on smart writing Clearly and comfortably aware of the concept of fetish.  The wigs, if you can believe it…the wigs…somehow,they are even more fantastic!!!

And let’s face it, super-dude Stephen Amell, really is Doctor ARROW, MD. He is the bestest of the best best ever! He’s the reason I do curls. In fact, there isn’t enough space on the internet to describe what a pitch-perfect 1940’s restrained leading man he is. There are three scenes in particular that I think of. 1.) Oliver with the Huntress after she’s arrested Oliver confronting. 2.) Oliver telling Laurel off during her brief drug problem. 3.) Oliver talking to his mom about why she should stay in the mayoral race. Each, an intensely sublime performance. Each, making me feel a particular feeling and scream at my laptop, “Awwwww, shit! No flubbing way!” Stephen Amell is a puma locked in a motel bathroom. And, I think the shower is on.

And seriously, on a side note…I know, I goof around quite a lot. But, just between us, totally on ‘the reals,’ if you take one thing from this entire article. Please, do yourself a favor. Join the Stephen Amell facebook page. I am so serious. No foolin. Trust me. You will enjoy the show in a deeper way…and, I don’t know how to explain this…but, you’re just gonna feel better.

To be honest, my love for ARROW is to the levels where it is a little too precious.  It’s actually kinda hard for me to articulate. Much to the chagrin of our dear, put upon, editor Jason ‘The Fury” Furie. A year ago people laffed at me for stating that CW’s ARROW was going to do for live action superhero television that BATMAN: THE ANIMATED SERIES did for animated television. (In this now classic NERD article) Now with Gotham, Constantine, and Netflix rocking out four more Marvel shows. (Plus,whatever else I’m forgetting.) It seems like I can sleep the sleep of the just. I just hope ARROW doesn’t get lost in the influx. So much has been built on its back. It is the show that I have waited for my entire life to watch.