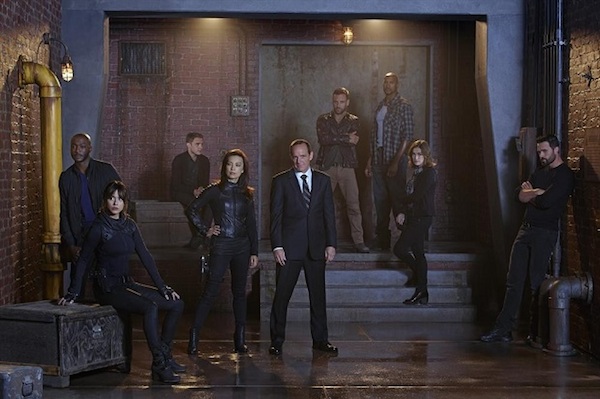 Marvel’s AGENTS OF S.H.I.E.L.D. left us dangling with questions aplenty following the epic finale to its first season.  Where do our ragtag band of rogue operatives go from here after the collapse of the seemingly all-powerful world organization?  What secrets lie hidden in the mysterious past of Skye (Chloe Bennet)?  What is the final fate of tech-genius Fitz (Ian De Caestecker) following his near-fatal drowning?  What’s in store for Ward (Brett Dalton) now that he is revealed to have been a HYDRA double agent the whole time?  What do those strange symbols that the newly-appointed Director Coulson (Clark Gregg) keeps scratching onto walls and chalkboards mean?  Why, oh why, did S.H.I.E.L.D. have to leave my TV screen for the summer when it just started to get interesting?

Enter Season 2 with (what I consider to be) a 2-part premiere with the episodes “Shadows” and “Heavy is the Head.”  Right out of the gate, the show wastes no time in paying homage to the already rich tapestry of the Marvel Cinematic Universe with a re-introduction to FIRST AVENGER characters and Howling Commandos Timothy “Dum Dum” Dugan (Neal McDonough) and Jim Morita (Kenneth Choi).  They, along with Agent Peggy Carter (Hayley Atwell, no doubt revisiting her character before the premiere of her own TV series in 2015) are leading a raid on a secret HYDRA facility overseen by the very Aryan-looking Reinhardt (Reed Diamond).  They are able to easily defeat the fledgling HYDRA forces, who are no doubt demoralized by the loss of the Red Skull, and confiscate all of their weaponary and research (including the enigmatic blue corpse from Season 1).  Sure, it’s a fun little opener to get you back in touch with the larger Marvel Universe, but unlike previous cameos and name-drops on the show, it serves a specific function as the story leaps ahead to present day with our main characters trying to track down one of the unknown weapons/relics and keep it out of HYDRA’s hands.

Season 2 is poised and ready to get you caught up on the new status quo.  Coulson is now acting Director of what is left of S.H.I.E.L.D. and what is left is not very impressive.  They operate out of a smaller facility and all their most-effective tech and transports are on the fritz.  Melinda May (Ming-Na Wen) is still Coulson’s second in command and has taken Skye under her wing to complete her training as an effective agent.  We see that Fitz is not quite the same after his near-death experience, unable to fully complete his thoughts and equations due to slight brain damage and relying on support and solace from the presence of his partner/fellow scientist Jemma Simmons (Elizabeth Henstridge).  I warn you, the revelation of that relationship is truly heart-breaking.  Agents Billy Koenig (Patton Oswald) and Antoine Triplett (B.J. Britt) remain loyal to the cause, but the group has been forced to open up its ranks to less predictable variables such as a group of mercenaries consisting of former Agent Isabelle Hartley (Lucy Lawless) and Lance Hunter (Nick Blood).  Oh, and for good measure, Ward is imprisoned in the basement and is regularly interrogated for information on HYDRA.

The show also doesn’t skimp on the action as our favorite agents not only have to deal with keeping out of the hands of the government and Brigadier General Glenn Talbot (Adrian Pasdar), but also must combat HYDRA and their chosen operative for this assignment: Hulk villain Carl Creel a.k.a. the Absorbing Man (Brian Patrick Wade) who can turn his skin into anything that it touches.  The effects work on this character alone are pretty impressive for a TV budget.  The break-neck pace of the action scenes also hammers home the idea that S.H.I.E.L.D. has still got a long way to go to finally rid the world of HYDRA’s evil and that there will be severe losses on both sides before that day arrives.  All the while, even more questions are raised with glimpses into HYDRA’s new secret plans, Coulson’s continued scribblings, the return of the seemingly-immortal Reinhardt and the grand reveal of Skye’s real father (Kyle MacLachlan).

On the acting front, I feel the cast has taken leaps and bounds from where they started.  Clark Gregg retains his typical Coulson wit and snark, but you can feel the weight of the world on him as the new Director.  Questions about his resurrection still remain, but now he also has to do deal with calling all of the shots for S.H.I.E.L.D. and making the hard choices that used to be made by Samuel L. Jackson’s Nick Fury.  He is not devoid of humor, but he definitely has a lot of heavier things on his mind.  Chloe Bennet has taken Skye from being the character that the show seemed to have no idea what to do with and turned her into a more serious and determined operative.  Ming-Na Wen’s May is as stalwart and frosty as ever, but she appears to demonstrate a more personable and softer side towards Skye as her S.O. and as confidant to Coulson.  Brett Dalton’s Ward remains the wild card and he plays him with just as much moral ambiguity: is he truly trying to repent for all his past misdeeds or is it all a ruse to regain Skye’s love and trust for himself, HYRDA or someone else?  The introduction of new “agents” from Lucy Lawless and Nick Blood provides a much needed shift in character dynamics with the use of smug outsiders who may not always comply with Coulson’s orders.  Ian De Caestecker knocks it out of the park with Fitz as he went from being the plucky optimist to being considerably darker and damaged, without a doubt the most sympathetic character on the show.

AGENTS OF S.H.I.E.L.D. has come a long way from being the fun idea of the Marvel show that “fills in the time” between movies to being a self-sustaining and interesting storyline all on its own.  For the first half of the first season, it felt as though the show and its characters were directionless, jumping from adventure to adventure with no larger picture in mind save for an occasional nod to the MCU.  Season 2 is a complete 180 with a retooled mission statement and a pretty clear idea of what kind of show it wants to be.  While I’m sure there will be plenty of tie-ins and cameos from the movies (there’s a rumor that Robert Downey Jr. is interested in popping up for an episode) as well as expanding the universe further (Adrianne Palicki is set to appear as Mockingbird), I hope the season maintains the high quality that the premiere presented with its streamlined narrative and focus on character.

As Coulson himself continues to point out, S.H.I.E.L.D. got too loud and too big too fast.  Time to bring things back to basics.

Count me in, sir.

PS- I have a theory that MacLachlan is actually just playing his Muad’dib character from DUNE and that Skye is actually part Fremen.