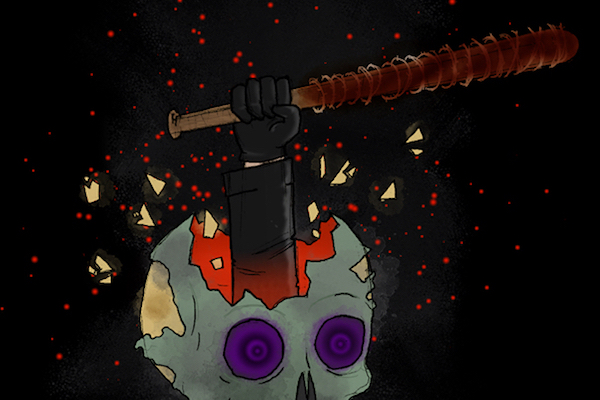 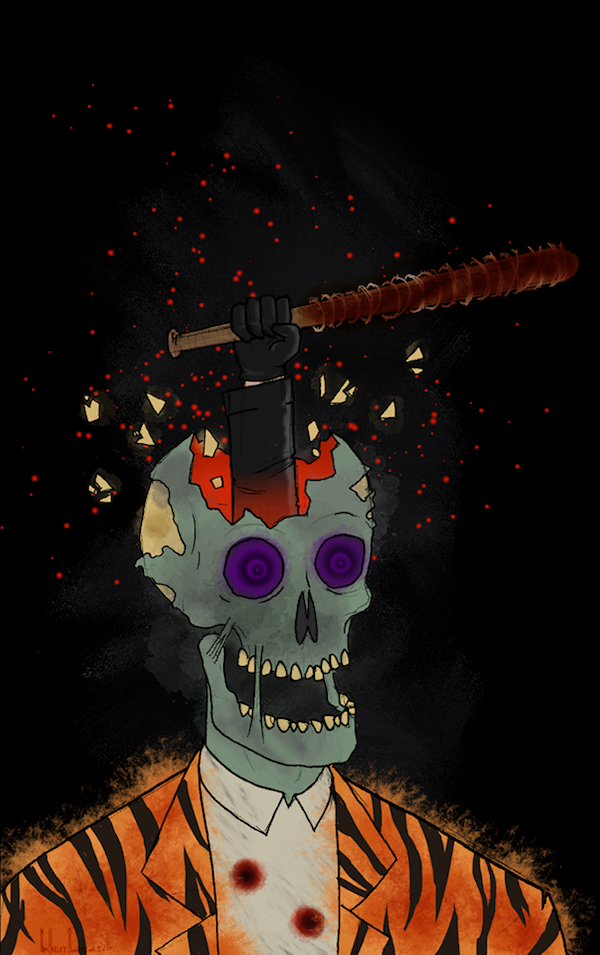 Fair Warning: This review has some major spoilers within!

The new season of THE WALKING DEAD, or as I like to call it, ‘The Amazing Rick and his Spectacular Rick-Friends! Plus Mad Max Pit Zombie! Plus Tiger-Guy! Plus Zombie Kamikaze Deaths! Plus Trash People!”. If that reads like a circus sideshow of a season, that’s because it WAS a circus side show of a season, but that’s not necessarily a bad thing.

There was something unique about this season that stood out to me as a fan of both the show and the comic. Despite myself, I actually felt GOOD! Of course, I’m not talking about times like Glenn getting his brains bashed out, poor Spencer having his guts spilled in front of the whole town, or watching a happy peace-loving teenager bleed to death. I’m not a psychopath, but there were times where the show really conveyed a sense of hope and friendship while Rick was putting together his coalition of fighters to take on the evil. Also, Rick got laid, and people seemed to like each other here and there.

For those who don’t know, the big bad this season is Negan. Negan is basically the Hitler of THE WALKING DEAD universe. If you believed you saw the worst of it with the Governor, you’ll be wishing he was back in all his suave one-eyed goodness after spending just one episode with this leather-coated jerk-guy. Negan isn’t my favorite character by any means, and that’s not because I don’t have the proper appreciation for a good villain. My dislike of the character started with the comics, which has carried into the show quite a bit, and stems from one simple fact: Negan takes me out of it. His character is so over the top that to me, he becomes more of what I would think a parody character for THE WALKING DEAD would be. His way of talking, and his mannerisms are that of someone, who despite being interesting and different, is a bit TOO interesting and different.

I feel like THE WALKING DEAD walks a fine line with their characters, where they have these awesome and interesting character designs that border on superhero comic type characters, and up until Negan, they didn’t cross that line into parody in this fans eyes. However, the comic book version of Negan didn’t just cross that line, he took an incredibly gigantic leap over it, cursing and giggling the whole way over. This is of course, just my opinion, and that doesn’t go to say he’s not an interesting character in general, I just see him fitting in with a story like the LEF T 4 DEAD  video game series or something a little more comical and far fetched than THE WALKING DAED tends to be. This pertains mainly to the comic, however, where as the show is starting to throw these far fetched characters at us with an inspiration and gusto that is pretty impressive. For instance, the trash people. I do not like the trash people, but I find it sweet that all the creepy stalker people on the planet managed to find each other when the zombie apocalypse happened. These are people who used to stalk kids in chat rooms or ride buses through San Francisco mumbling to themselves, and for me there’s a little too much social awkwardness as they come off as people who never actually lived in a civilized society in their entire lives. When the leader of the group says to Rick “I will lay with him when the battle is done” I couldn’t help but think that these are people who couldn’t have existed before the apocalypse.

So, that’s the bad stuff out of the way, on to the good stuff. Glenn’s death was fantastically done, and a reminder of how aware the show writers are of their target audience being people who read the comics as well. Just when we thought they weren’t going to kill Glenn with their surprise Abraham murder, BOOM, they sure as hell did. As a fan of both mediums I can appreciate the effort they put into trying to trick us comic geeks into making it an interesting show for us as well as the casual watcher.

I also really appreciated the second half of the season’s rise out of the grilling despair that the first half left us wallowing in. We got a chance to see love, hope, and friendship in the face of pure evil, and that is something that I haven’t seen too much of in this show. Sure, characters died, and they did so heroically, but they stayed with the theme of sacrificing for each other to make a better society. If anything, this season left me really feeling and respecting the bond that these people have for each other, and what they’ll do to uphold that bond, and that is the essence of THE WALKING DEAD that is so important and pivotal to the series. Characters dealing with loss, forgiveness, and love revitalized my respect for it and made me almost enjoy the outlandish quality of the outside characters that appeared throughout the season. In a way, the cartoon aspect of these new additions were almost enjoyable because of the reaction that our heroes had to them.

This season definitely had its ups and downs, its hard times and its good times. Overall, it was a solid addition to the story-line and has revitalized my interest in the series. I can’t wait for the next season!