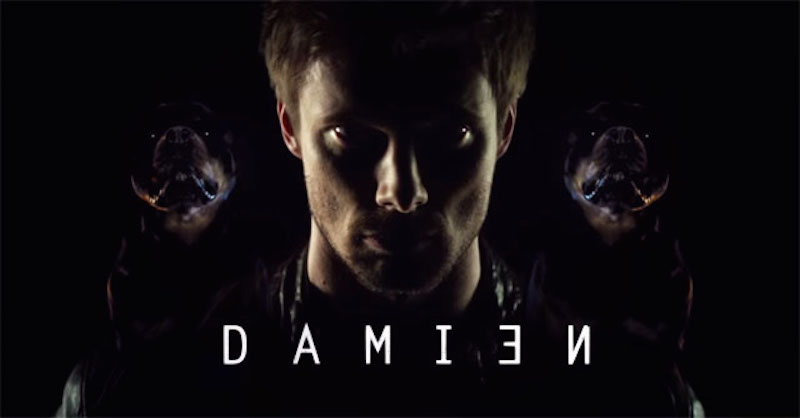 It’s all for you, Damien!

Damn, that movie creeped me out when I was younger. I was never really a fan of movies that involved the devil. EXORCIST.  ROSEMARY’S BABY. TRANSFORMERS. The idea that there actually could be a little red dude chilling down below trying to forever rotisserie my soul was a concept that my adolescent mind just couldn’t handle. What?  Lucifer?  That dude from Sunday school?  Nah.  While films like the EXORCIST were terrifying, what made films like THE OMEN so much more unnerving was the idea that the devil could actually unleash a homicidal offspring onto our unsuspecting modern society. A child born to influence and surrounded by faithful followers that would protect him until he’s ready to rightfully claim his Earthly throne of blood and agony.  Also, children are already creepy enough without the addition of satanic energy coursing through their veins.

At last year’s San Diego Comic Con, It was announced that A&E would be premiering a television show that would serve as a direct sequel to the 1976 film THE OMEN, starring Gregory Peck.  When that movie ended, their seemed to be nothing standing in Damien’s way of world domination.  So we would believe.  The A&E shows seems to follow a grown up Damien who has completely forgotten all about his sinister childhood. In fact, he’s actually a pretty decent guy.  He’s still rocking that sweet ‘666’ birthmark on his head though. The show will follow his journey to discover his true origin and potentially discover a way to break free from the destiny his true father had laid out for him.  Also, to figure out why dogs love him so gosh damn much. I think that’s a pretty great spin on the story.  It’s reminiscent of ROSEMARY’S BABY and how she slowly became aware of the massive conspiracy surrounding her and how she attempted to break free of it.  Except, the one trying to break free of the evil shenanigans circling them is the son of Satan himself.