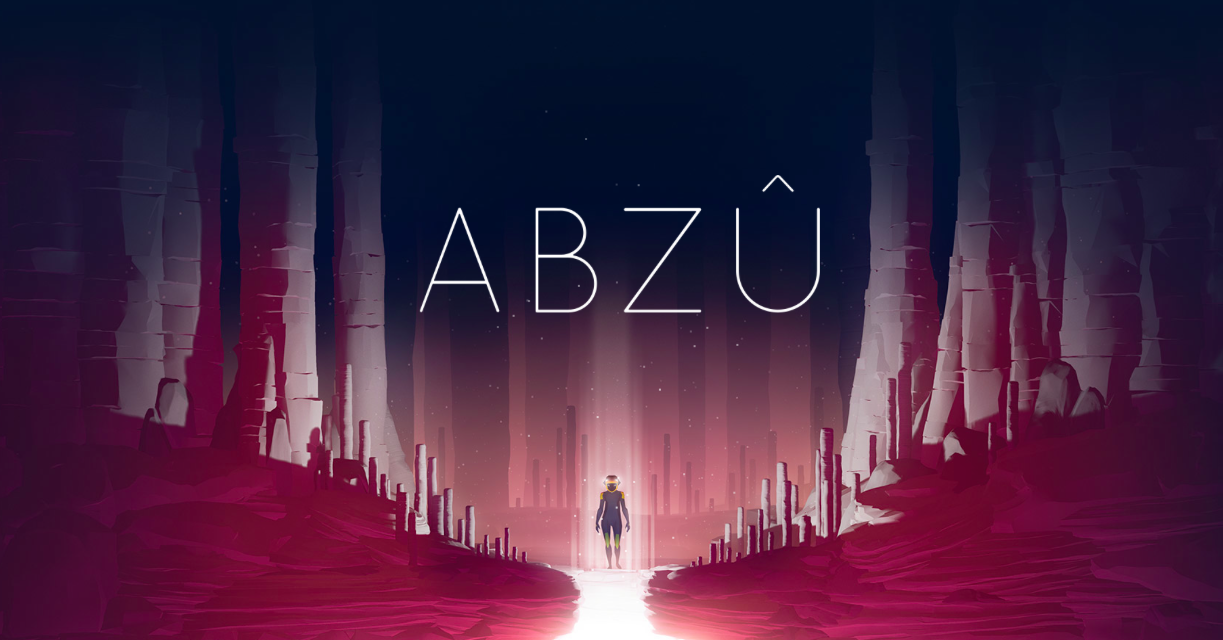 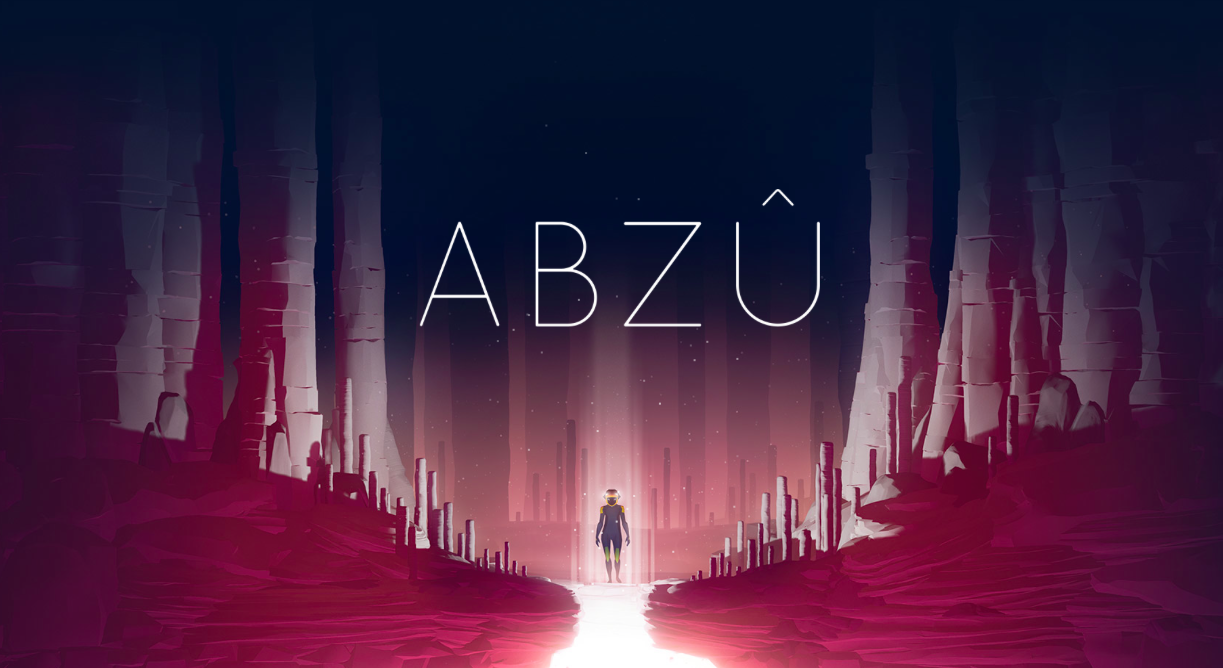 ABZÛ is an epic descent into the depths of the sea, where players will explore beautifully rendered ocean environments with fluid swimming controls. The experience draws inspiration from the deep innate narrative that we all carry within our subconscious: the story of ABZÛ is a universal myth that resonates across cultures. The name references a concept from the oldest mythologies; it is the combination of the two ancient words AB, meaning ocean, and ZÛ, meaning to know. ABZÛ is the ocean of wisdom.

After watching the spectacular keynote presentation, I headed to the game room floor as fast as I could to get my grubby little hands on ABZÛ and play it for myself. Everyone at the ABZÛ booth was welcoming, nice, and really excited about their game. I was quickly set up at one of the many stations to play the game. Here are my gameplay impressions:

Even though I was surrounded by loud, pushy, and ravenous nerds (myself included) I immediately felt a sense of peace and calm once I placed the headset on and was transported into the world of ABZÛ. I was a nameless character in a simple but well-designed water suit (flippers and all!) with my head just above the water looking to a peacefully cloudy sky. The ocean endlessly stretched in every direction so my only real choice was to dip down below. And oh man, crossing the threshold between above water to under water was pretty amazing as if I was immediately thrust into another universe. The graphics are perfectly simple and stylized with some great color choices to represent different areas of the ocean I was exploring. 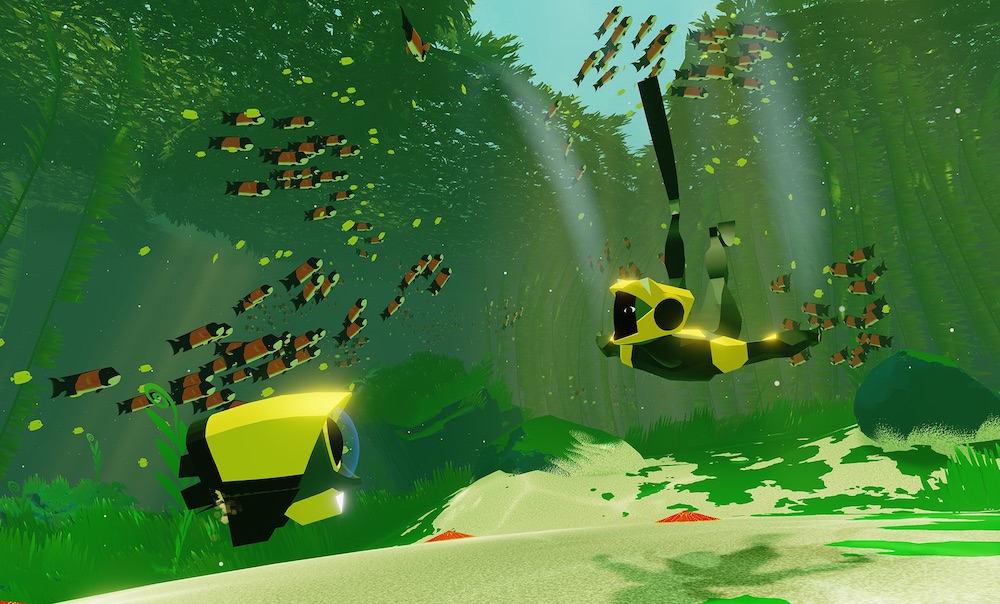 After diving as deep as I could go, I brushed up against the sandy floor, swam through some wispy plants, and even greeted some schools of fish that could mask my body (something I imagine will play a role later in the game). I soon spotted something glowing underneath the sand and activated my sonar ability to dig it up. It was a cute little yellow drone that accompanied me after I dug it up who seemingly gave my sonar some wider range. The little guy also vacuumed up curious puddles of bluish green goo I spotted on the ocean floor. Why not? I found another buried drone, uncovered the little guy, and we all set off to explore deeper territory. I rode a Manta Ray, caught a ride on the back of a large turtle, and discovered a bunch of new types of fish to hide within. It was all so relaxing and peaceful.

As I continued to explore I discovered new pathways hidden underneath mounds of sand and behind dense plant clusters. I just got lost in it all. At once point I was in a deep cavern surrounded by beautiful jelly fish. Just when I began to ease into the peacefulness a huge shark swan in front of me at the exit of a cavern. He seemed more scared of me than I was of him. He quickly swam away. But after following the sharks path for awhile he jumped out of nowhere and ate one of my little yellow drones. RIP. 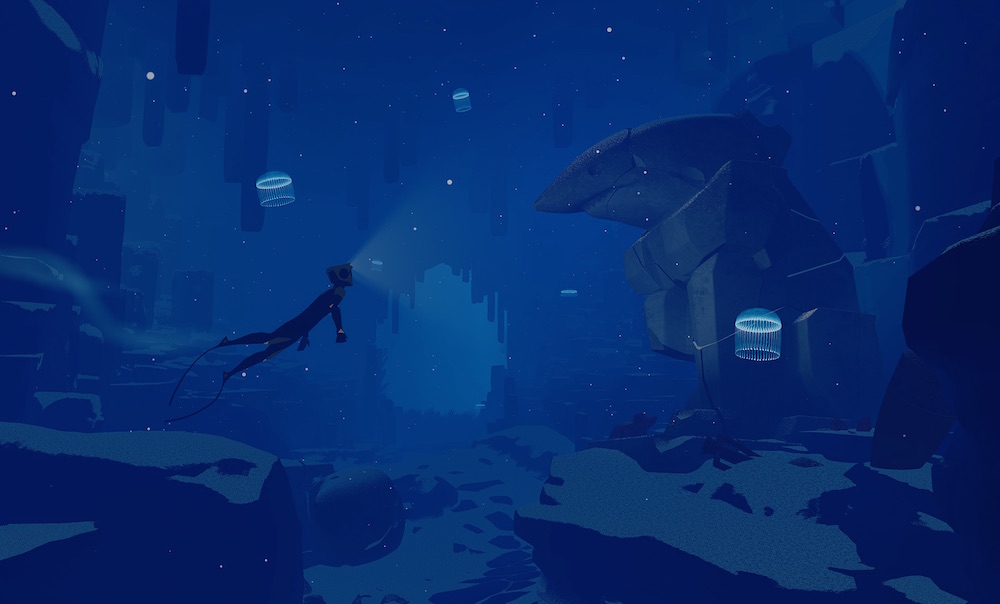 My time was almost up with the demo, and the line behind me was patient but obviously eager to try it out. Just a few more minutes! Near the end of my play through I discovered what appeared to be an ancient statue that looked Egyptian. It had the head of a shark on it and looked very cool. Swimming on the ocean opened up again revealing some cool structures that could have some significance to where I was suppose to go next. I decided this was a good place to stop for now and let someone else have a shot. To say the least, my interest was peaked and ABZÛ turned out to be even greater than the high expectations I already set for myself. Damn, that was fun.

If the high I received from experiencing ABZÛ wasn’t enough, a staff member gave me a cool ABZÛ poster and after signing up for a newsletter I received an amazing ABZÛ t-shirt from Giant Squid Studios. What a great overall experience that was.

For more ABZÛ goodness, be sure to check out the game’s main website HERE.