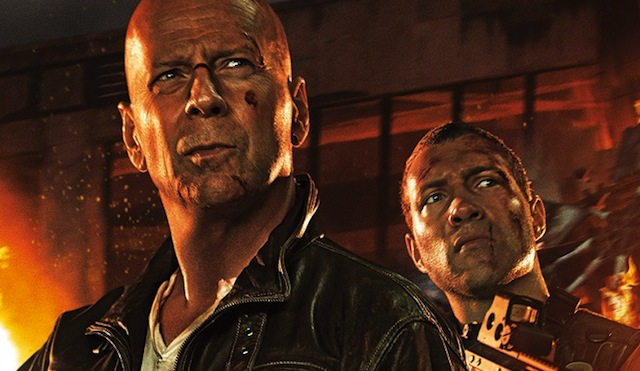 The best advice I can give anyone going into this movie is to not expect it to be just like the first DIE HARD back in 1988. If you do, you are setting yourself up for disappointment. That said, A GOOD DAY TO DIE HARD is one of those movies that most people will not like before they even see it, and if they do, will likely try and find all the ways they can say it’s bad rather than enjoying it for what it is; an over-the-top action film featuring a more grizzled version of a classic character. Let me get one thing straight; I am a HUGE fan of the DIE HARD series and possibly and even greater fan of Bruce Willis himself. He is one of the best action stars I can think of and simply having him return as New York police officer John McClane makes it enjoyable for me. So while I did not put my expectations for A GOOD DAY TO DIE HARD too high, I was fairly excited to see this film and was fully ready for it to kick ass. Knowing that most people out there are haters, I fear I will be in the minority when I say that this film kicks ass and was one hell of a ride for me as an action movie fan and Willis fan alike.

A GOOD DAY TO DIE HARD directed by John Moore (MAX PAYNE) is the franchise’s fifth installment and is the sequel to 2007’s LIVE FREE OR DIE HARD which I consider one of my favorite action films of all time. Make fun of me all you want, but that film saw John McClane reach a new level of awesome and featured some of the coolest action sequences I can remember! People that complain that McClane is more of an indestructible bad ass these days instead of a Cop full of fear need to reflect on all crap he has been through over the past 25 years. If you made it through half the shit McClane has, I think you would turn into a fearless warrior too. So complaining that our hero is too heroic just doesn’t make much sense to me. John McClane is a complete bad ass who has evolved into someone comparable to a superhero and I love it! 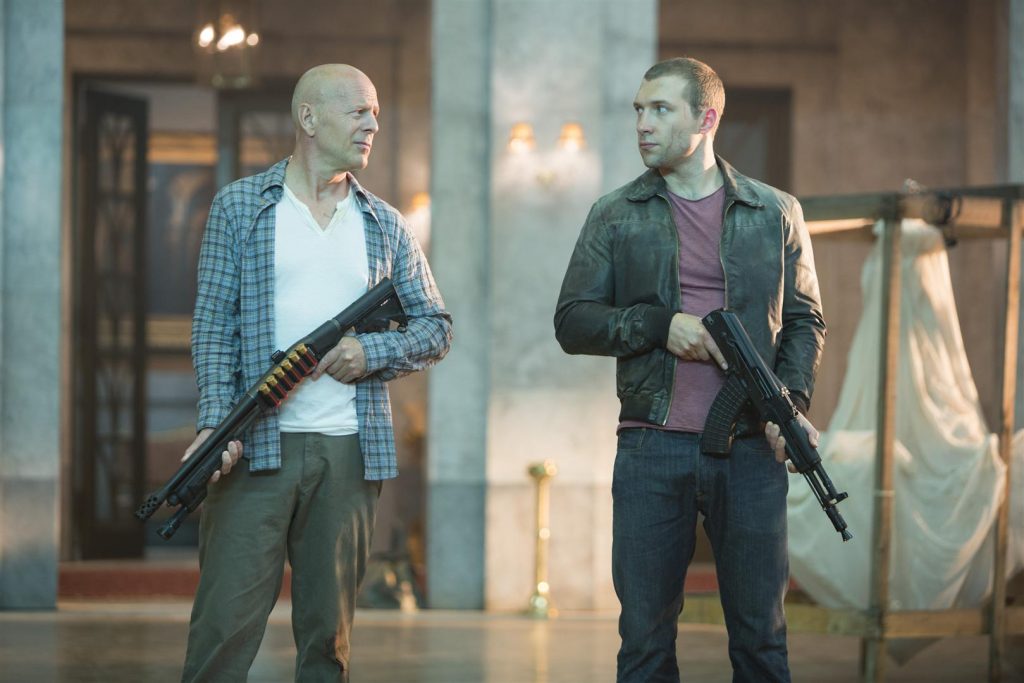 For this newest installment, the series changes the formula a bit and sees John travel to Russia to rescue his son Jack who is seemingly in trouble with the law. Most will skulk at the change of scenery for the series, but I found it to be a refreshing change of pace for a lead character who was definitely out of his element. Even still, John dives headfirst into the rescue mission and is greeted by a handful on unexpected twists and turns that I will not spoil for you. While a few moments here and there may have seemed predictable, A GOOD DAY TO DIE HARD had a decent amount of twists and character turnovers that I did not see coming keeping me interested in the narrative the whole way through its somewhat short 97 minute run time. For a pure adrenaline-fueled action movie, the run time and overall pacing seemed just right.

The past 2 DIE HARD films have featured a buddy character for McClane to play with in the form of Samuel L. Jackson in 1995’s DIE HARD: WITH A VENGEANCE and Justin Long in 2007’s LIVE FREE OR DIE HARD. This fifth installment continues that trend with John’s son Jack, Played by up-and-comer Jai Courtney (JACK REACHER),  joining forces with his father to kick some Russian ass. Willis and Courtney have some excellent screen chemistry in this film and it was a pleasure watching the McClanes blow the shit out of everything in their path together. Not only were their action scenes together fantastic, but the conversations and jokes they dished out during all the gunfire and explosions was good fun. I enjoyed seeing John make shit up as he went along juxtaposed with Jack’s more methodical approach to each situation. While their methods may have been different, their overall stubbornness and willingness to throw themselves in front of danger is what makes these characters so fun. They know the difference between right and wrong and once they are put in a situation where they can take action, they do! 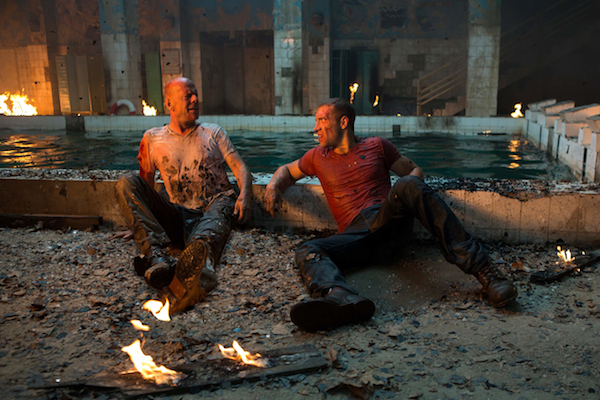 Besides the main McClane boys, the cast is full of a welcome group of actors that all pull their weight and deliver a great ensemble cast. We once again see John’s daughter Lucy played by Mary Elizabeth Winstead (SCOTT PILGRIM VS. THE WORLD) in another short but sweet role. While she does not get a ton of screen time, it’s nice to have that connectivity to the previous film. The rest of the main cast includes Sebastion Koch (UNKNOWN), Radivoje Bukvic (TAKEN), and Yuliya Snigir (THE INHABITED ISLAND) who all have interesting characters that are fun and eccentric. To say who the real villains are in this film can be considered a spoiler, but I will say that it is nice to mix things up a bit by having the main villain be a little more blurry than in previous DIE HARD films. Again, it would be a great disservice to this film to just compare the villain to the original DIE HARD’s Hans Gruber played by Alan Rickman (HARRY POTTER Series). I doubt anyone will deny his role as Gruber will go down in action film history as one of the best screen villains of all time. Even still, A GOOD DAY TO DIE HARD features and interesting lineup of villains that do not disappoint. All in all, I really had no issue with any of the main characters here. While not too deep, they all proved to be entertaining and enjoyable to watch.

A lot of people may call out A GOOD DAY TO DIE HARD as being nothing more than a bloated mess of an action movie. I really think that is not giving the film enough credit. Sure it’s nothing like the original, but I do consider this an above average action film that is a lot of fun and one hell of a ride. I found myself giddy with excitement during the majority of this film because it’s a nonstop thrill ride of an action movie. There is really little time in the beginning of this film before we dive headfirst into an amazing car chase in the streets and freeways of Russia. What ensues after that is one sweet ass action sequence after another leading up to one hell of an ending that had my jaw dropping for sure. Seeing two McClanes dishing out  fists, bullets, and explosions was so much fun. I had my reservations about introducing Jack as McClane’s son, but once the credits rolled I was a believer. Besides the epic car chase, we are treated to so many fun scenes involving everything from a classic heavy weapon shootout to a full-on helicopter assault. As an action movie fanatic thirsty for something new, I was more than pleased with this film and the action it delivered. 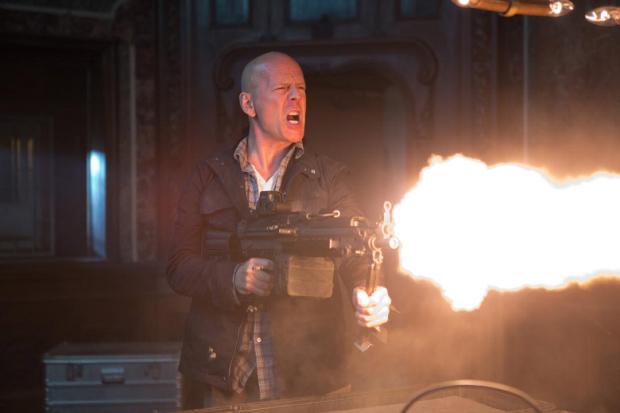 So is A GOOD DAY TO DIE HARD a worthy edition to this long running franchise? As a fan of the series, action movies, and Willis, I would have to say yes on all accounts. This film is a much different beast than the original DIE HARD. Expecting it to be a similar experience would be detrimental to your overall enjoyment of this film. McClane has evolved into a complete bad ass throughout all his adventures and it shows more than ever here. I have loved watching this character go from a scared police officer in the wrong place at the wrong time to the bad ass superhero we see today. A GOOD DAY TO DIE HARD is a nice change of pace for the character and the series offering fans a new and exciting way to enjoy this hero. The father/son dynamic works surprisingly well, the rest of the cast is in top form, and the action delivers during the smooth pacing of this action film. And I believe the “possibly too over-the-top” finale for some is well worth the price of admission and should most definitely be seen on the big screen. I’m glad to have A GOOD DAY TO DIE HARD in the series and hope that we don’t have to wait another 6 years to see the McClanes in action!