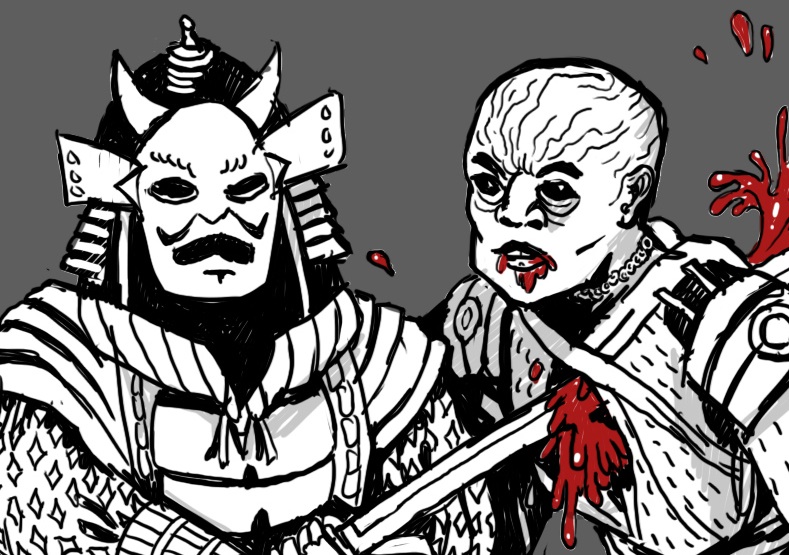 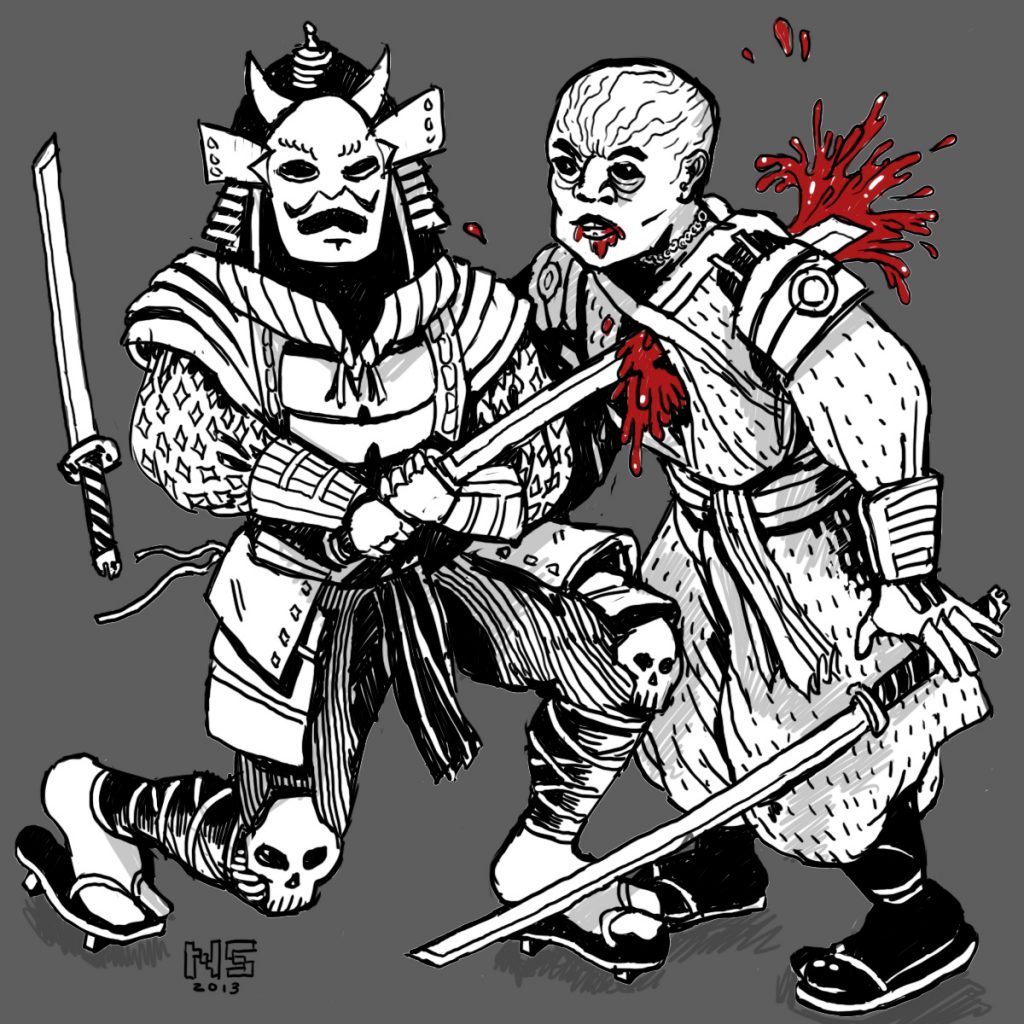 1) The original story of the 47 Ronin may be one of the most beloved and controversial stories throughout samurai history.  How the story goes is a lord by the name of Asano is provoked into drawing his sword against his dicknose of a master Kira. Such an act is considered to be a major offense. Because of his actions towards Kira, Asano it is forced to immediately take his own life.  Naturally, all of his followers are extremely pissed off by this judgement.  Further insult to injury, Asano’s followers were ordered to not take revenge over their master’s death.  Feeling that the judgement was improper,  a small band of Asano’s retainers – now considered to be ‘ronin’ – set out to avenge their fallen master.

2) A lot of the original elements of the original story remain in 47 RONIN, but, the addition of monsters, love, a damsel in distress, magic, witches and Keanu Reeves were obviously added in an attempt to give this movie more mass appeal.

3) Keanu’s character of ‘Kai’ doesn’t actually have any connection or relevance to the original Japanese story of the 47 Ronin.  This serves to be quite problematic for those who feel that this is just another attempt at a big budget Hollywood film trying to shoe horn a white character into one of the lead roles.

4) Despite all the evidence to the contrary, early Japan was not full of monsters and witches that walked freely throughout town and co-existed with humans in some weird unspoken human/monster agreement.

5) Much like THE WOLVERINE, this movie is comprised almost entirely of a Japanese cast, with the exception of the main character.  If you would consider Keanu to be the main character of this movie. Because of the cast breakdown and their limited english, it would have made sense for this movie to be in Japanese with American subtitles. Alas, that decision would have proved to be a tad too risky for Hollywood studios.

6) Hiroyuki Sanada plays Ôishi the leader of the small group of Asano’s ronin.  He was originally chosen for the role because the studios felt that the role would be better served by a lesser known actor.  Which is odd, because, Hiroyuki has appeared in some of my more favorite movies over the past few years.  THE WOLVERINE, SUNSHINE and SPEED RACER.  .. What?  You didn’t like SPEED RACER?

7) Rinko Kikuchi, from PACIFIC RIM, plays an evil witch dragon/spider monster lady that stands between the ronin and their revenge. Her character is a little over the top, but always in a fun campy evil monster genius sort of way.  Sadly, her and Kai are not ‘drift compatible.’

8) The character of Oishi is the most developed and detailed in the movie.  You find yourself rooting more for him than that of Kai, since Oishi’s journey is a lot easier to identify with.  Kai is pretty much the young Anakin Skywalker of this movie.  He doesn’t really develop as a character and you’re not quite sure if he’s the lead or not.

9) Another character invented solely for story line purpose is Asano’s daughter, Mika.  When the young potential demon spawn Kai comes running out of the magical monster forest, it is Asano’s hand who prevents the villagers from killing him. Despite the possibility of Kai being some sort of monster in human clothing, Mika begins to develop feelings for the young buck with scars all over his head.  Of course, the real Asano didn’t have any children, but if he did, I doubt he would let them gallivant around town with some weird half breed outcast.

10) In the original story, it is Asano’s death that starts the ronin on their path of revenge. In 47 RONIN, it is Lord Kira kidnapping Mika that really gets the ronin to a point of wanting to do something.  Although, the movie does sort of give you the impression that they have been planning their revenge for a while, but, it’s a little unclear what’s been holding them back all this time.. Like a lot of things in this movie, you’re left scratching your head and wondering if you missed something.

11) Keanu Reeve’s name translates to “cool mountain breeze” in Hawaiian. Which is weird, because there are both mountains and breezes in this movie.

12) The act of  ‘Seppuku’ is a Japanese ritual suicide where a samurai voluntarily disembowels themselves when they have committed some form of shame or dishonor. It is not pleasant.

13) This is one of the few movies I’ve watched where I didn’t eat popcorn.  I actually decided on a soft pretzel.  It was chewy.

14) When I was younger, all I wanted was a samurai sword.  I remember saving up my allowance for a couple of months and finally asked my mom to buy me one.  She came back with a wooden one.  I was a little disappointed.  To this day, it’s very difficult for me to resist buying one at Comic Con.

15) Director Carl Rinsch was removed from the editing room once the budget of the film shot past $225 million.  I can almost imagine the stern hand on his shoulder.  ‘Carl.  It’s time to go.’

16) Despite there being weird snake looking monks, giant stampeding monsters and spider witches dangling from the ceiling, Keanu Reeves didn’t once say ‘whoa’ in this movie.

17) A majority of this movie suffers from what I call ‘Legolas sydrome.’ Just like in the LORD OF THE RINGS films, Keanu Reeves finds himself in the background, with no lines, trying his hardest to stay involved in the plot that is unfolding in front of him.

18) I enjoyed the fact that the fate of the world did not hang in the balance in this movie. Yes, some of the demons have grand plans to take over Japan, but the story primarily stays true to its core of a small group of men seeking revenge for the death of their master against a man who would be king.

19) In 47 RONIN, Keanu Reeves’ character is continually referred to as a ‘half breed.’  Which was the name of the half angel/half demon beings in Keanu’s 2005 comic book adaption CONSTANTINE.

20) The world of 47 RONIN is a little confusing at times.  The samurai codes seem to be authentic and in keeping with their historical counterparts. But, the monster and witches seem to confuse things slightly. I mean I know that witches and monsters don’t really exist.. At times, it’s hard to tell what the regular people are cool with and what’s fucking blowing their god damn minds.

21) The dialogue of this movie, while intentionally campy, is quite natural.  There were very few ‘groan’ out loud moments. It’s really the lack of emotional investment in the characters that keeps you from completely connection with the story.

22) Historically, there are two conflicting opinions over the actions of the 47 Ronin.  Some believe that they were slow to act on their revenge and risked Kira dying of natural causes by the time they were able to enact their revenge.  While others believe that the ronin were acting dishonorably by going against the judgement of the shogun.  Most people are in agreement though that Kira was pretty much a piece of shit who’s actions caused the deaths of countless honorable men.

23) Have a thing for Rick Genest?  The full body tattooed guy on the poster? Then, this movie is for you! I mean…he’s only in it for about 5 minutes, but, that’s way longer than he was in that Lady Gaga video…

25) Half way there! Did you know that I have a ‘sad Keanu’ cut out on my computer.  It judges my poor Excel skills.

24) BILL AND TED’S EXCELLENT ADVENTURE took place over 25 years ago.

26) This movie was first announced in 2008, completed in 2011 and then shelved for 2 years.  Personally, I don’t think 2 additional of years of editing could have fixed the problems with this movie.  But, it couldn’t have hurt?

27) In the original screenplay, Keanu Reeves’s character only had about 20 minutes of screen time.

29) I may have bitten off more than I could chew by saying that I could find 47 things about this movie to write about.

31) Keanu Reeves and I grow exactly the same beard.

33) This movie was Carl Rinsch’s directorial debut. It’s fairly obvious that a large part of this movie’s problem stem from the lack of experience from Rinsch.

34) Keanu Reeves continually impresses me with his fluid fighting ability. I still think the second MATRIX movie has some of the best fight scenes ever filmed. Yeah, I don’t say that lightly.  If you want more bad ass Keanu, I definitely recommend tracking down his directorial debut MAN OF TAI CHI.  Albeit, impressive.. the fight scenes in 47 RONIN are not enough to save you from the disjointed story and hard to follow cinematography.  Sad Face.

36) Jan Roelfs’ production designer is extremely well done and extremely eye catching.  Jan Roelfs was nominated for an Academy Award for both ORLANDO and GATTACA.

37) One of the only things I remember from GATTACA is Ethaa Hawke on the beach, cleaning himself with a seashell.

38) The snake-like, magic witch-monks who raised Kai bare a striking resemblance to Death in BILL AND TEDS BOGUS JOURNEY.  ‘You may be a king or a street sweeper but sooner or later you dance with the reaper.’

39) Keanu Reeves is ambidextrous and has been known to play bass guitar with both his left and his right hands.

40) Man, that last MATRIX movie didn’t really make sense.  I really wanted THE MATRIX and the “real world” to all be inside of a bigger Matrix.  I guess, we are all living in our own matrix.

41) On December 14th in memory of the original 47 Ronin, some villages close all schools and business in honor of the sacrifice they made.

42) This is not the first time that Hiroyuki Sanada was forced to play second fiddle to a white actor in a film chronicling a historic moment in Japanese history.  Oh Tom Cruise… What the hell were you doing in THE LAST SAMURAI?

44) This movie isn’t complete rubbish.  The effects of the monsters are extremely well done.  The fight scenes are well orchestrated.  The veteran cast does the best with what they have to work with.  The lack of structure and confusing plot do take their toll on you eventually. The actors struggle with the accents and Keanu struggles to find his purpose in the film. I definitely recommend this movie on a lonely Tuesday night, in your pajamas and a nice strong drink in your hand.

45) Okay, the original story of the 47 ronin may not have actually happened.  But, life has more meaning when you believe certain stories to be true.

46) This movie may be called 47 RONIN, but, you really only get to learn about 5 of them.  They should have called this movie ‘A Bunch of Ronin.’

47) It’s predicted that this film will be an estimated $175 million financial loss for all the studios involved.