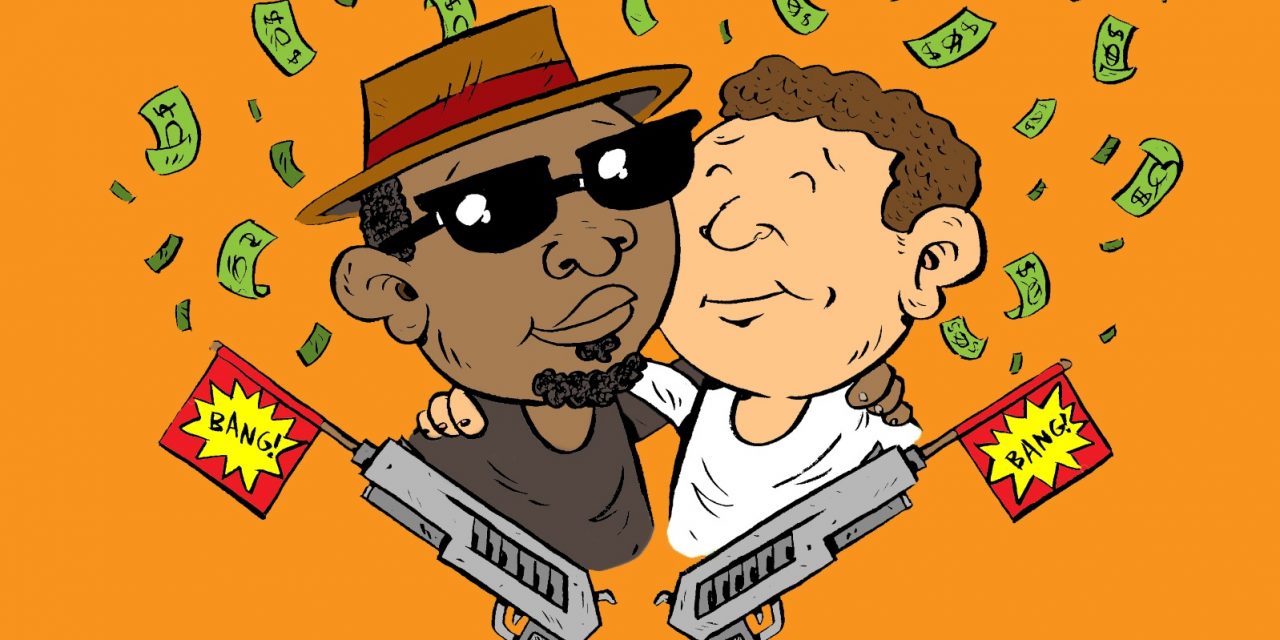 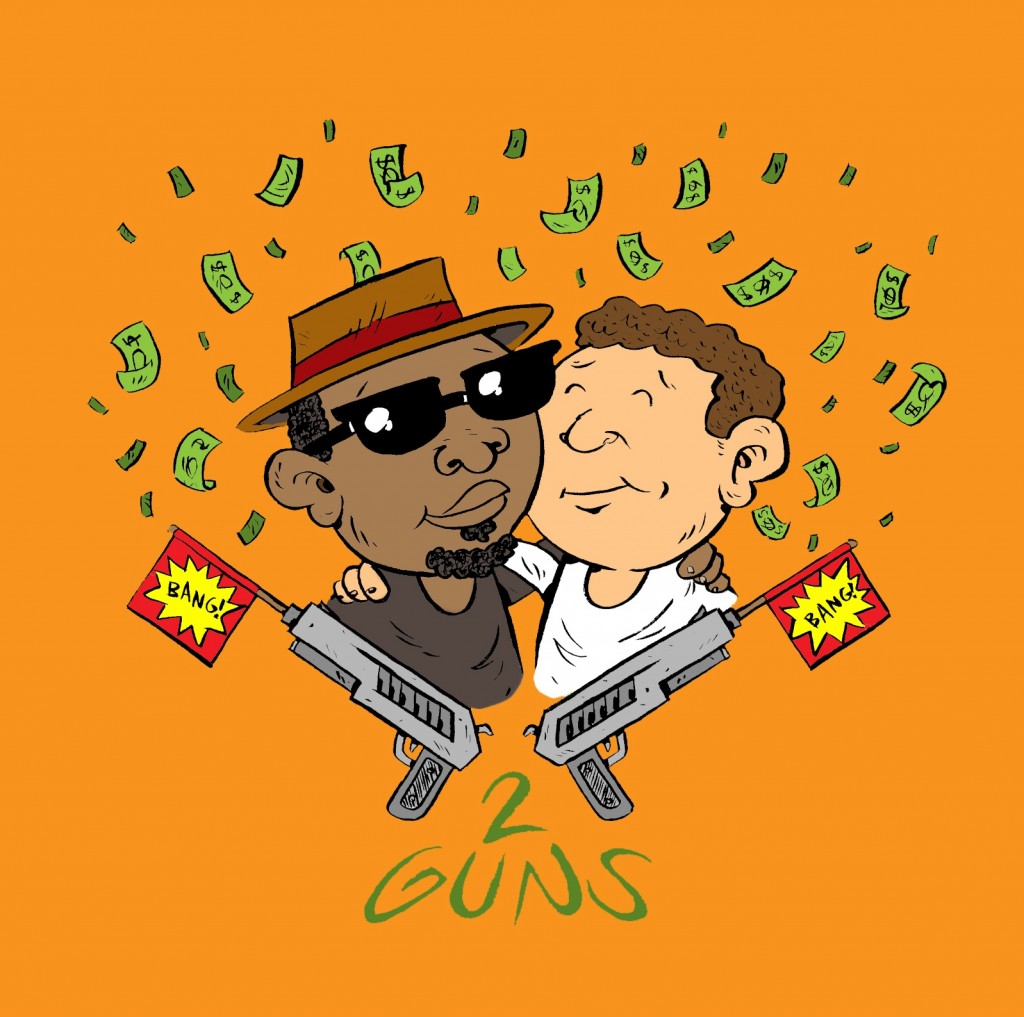 48 HRS. was something of a pioneer in the realm of the “buddy action-comedy” sub-genre.  The chemistry between Nick Nolte and Eddie Murphy in that film allowed not only for opportunities of high-octane firefights, but also a very believable antagonistic relationship that slowly develops into mutual respect and friendship.  Plus, Nolte and Murphy worked very well together as a comedic duo.  Since then, we’ve had a fair share of spiritual successors to this character dynamic, ranging from over-the-top super cops (TANGO & CASH, RUSH HOUR series) to swashbuckling adventures (PIRATES OF THE CARIBBEAN series) to sci-fi investigators (MEN IN BLACK series).  Needless to say, the “butting heads” bromance is alive and well in 2 GUNS, the newest action flick that kicks off the last month of summer blockbusters.  Does it offer anything new or innovative to the sub-genre?  Not really.  But that doesn’t stop it from being a hell of an entertaining movie!

Based on the Boom! Studios comic book series of the same name, 2 GUNS follows the exploits of criminals Bobby Trench (Denzel Washington, FLIGHT) and Michael Stigman (Mark Wahlberg, PAIN & GAIN).  Both men plot together to rob a bank containing $3 million belonging to a notorious drug lord Papi Greco (Edward James Olmos, BATTLESTAR GALACTICA).  Things become decidedly complicated when it’s revealed that not only did they steal $43 million, but that the money actually belongs to a sadistic rogue black ops CIA operative named Earl (Bill Paxton, HATFIELDS & MCCOYS).  Oh, and to make matters even more awkward: Bobby is an undercover DEA agent hoping to use the cash to catch Greco in money laundering and Michael is an undercover Navy operative whose mission is to secure the loot to fund shady NCIS covert operations.  Neither man is aware of each others’ true identities until the bullets start flying from all sides.  Papi Greco and his cartel are looking to take the money for themselves, Earl is looking to claim his stolen property and Stigman’s fellow NCIS officers want him dead to erase any traces of their involvement.  Either way, things are looking pretty grim for Bobby and Michael unless they can learn to trust each other again and pull together against their common enemies. 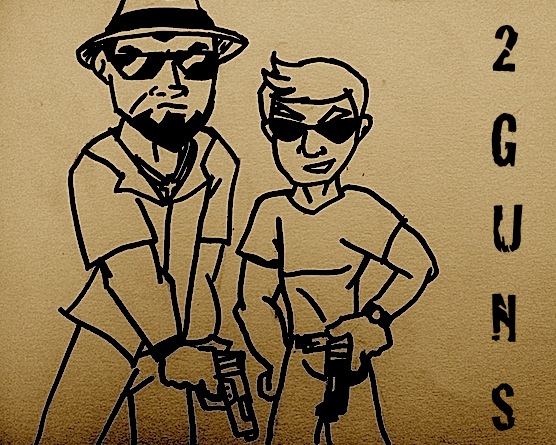 With a lesser script and a less charismatic cast, I can’t say that this film would be worth watching.  Thankfully, both of these factors are given the royal treatment in 2 GUNS.  You’ve probably seen this plot done before in a dozen other movies, but what kept it refreshingly entertaining for me was the two leads.  Denzel Washington and Mark Wahlberg have great chemistry together, making their standard witty banter far more engaging and endearing than if the roles had been handed to anyone else.  You really do get the sense that these two guys like each other and respect each others’ abilities, even after their deceptions are revealed and trusting one another becomes an issue.  Bobby plays more of the straight man to Michael’s antics as the latter flies off the handle more with insulting adversaries and being more unpredictable in the action scenes.  At no point do you feel like either actor is going through the motions.  Both of them are very funny and likable when they are on screen and are still provided with genuine human moments to shine through.  A very disturbing revelation to Bobby that could have played in a more melodramatic light is given a quieter treatment as Denzel’s legs buckle from shock and the look of horror on his face speak far more volumes.  Much in the same way with THE WOLVERINE the week before, 2 GUNS recognizes that no matter how far out the action sequences get, everything has to come back to the characters.

Washington and Wahlberg are not the only entertaining aspects of the movie.  The villains are, without a doubt, an added joy to the viewing.  Bill Paxton looks to be having a lot of fun with the role of Earl, playing him as both eerily cold in his methods and hilariously over-the-top.  Anyone who can make the same interrogation scene involving Russian Roulette intimidating twice in a row is worth watching.  Edward James Olmos portrays Papi Greco as a pretty “strictly business”-type of drug kingpin, but is still able to turn on the cruel intensity when it is required of him, wailing on our two protagonists’ ribcages with a bo staff and holding Bobby’s love interest at gunpoint while eating quesadillas.  And you’ll never want to shake the dude’s hands again after seeing his preferred washing method.  The rest of the supporting cast does well in their roles.  Deb, the afore-mentioned love interest played by Paula Patton (MISSION: IMPOSSIBLE- GHOST PROTOCOL), is Bobby’s DEA handler and is given her own intriguing (albeit predictable) story arc that doesn’t quite end the way you would expect it to end.  Michael’s superior officer Quince (James Marsden, STRAW DOGS) plays a very determined NCIS agent with killer instinct out to complete the mission.  Even Fred Ward (30 MINUTES OR LESS) does a commendable job in his one scene as a hard-ass of a Navy Admiral. 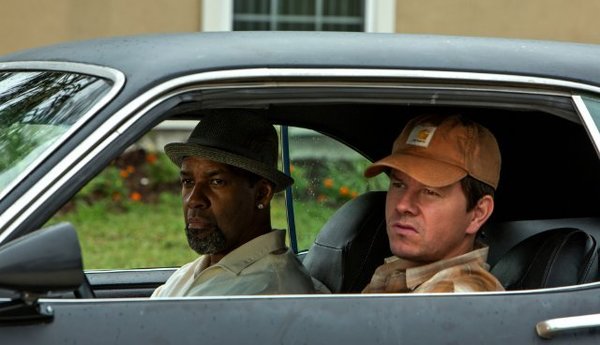 The action scenes of 2 GUNS are very intense and well-choreographed, culminating in an explosive 4-way Mexican stand-off for the finale.  And again, even if the plot seems to follow your standard “buddy action-comedy” formula, there are enough interesting character dynamics and twists to hold your attention for an hour and 45 minutes.  About the only bad thing I can say about the film is that it really doesn’t promote a high “re-watchability” factor.  It was a fun way to spend a couple of hours and I was able to move on with the rest of my day.  I don’t really have a desire to see it again, but should it turn up in the near future on Showtime or HBO, I wouldn’t be against putting aside whatever I’m working on and sitting down to enjoy it one more time.  Definitely if you’re a fan of either Denzel or Wahlberg, or if you like bickering action duos, I would recommend checking it out either in theaters at least once or when it hits DVD/BluRay.  You may have seen this plot and these characters done before in other films, but you’ve never seen them done quite this well.