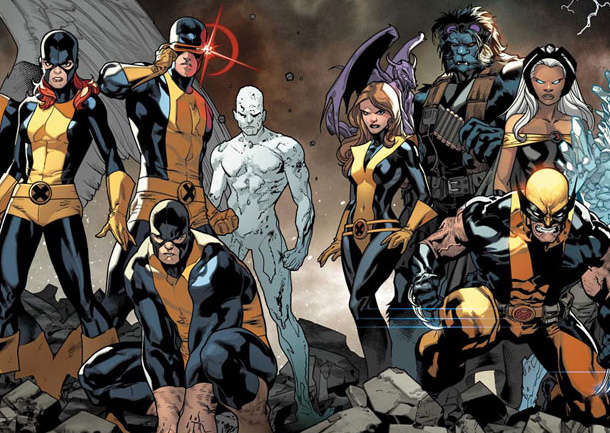 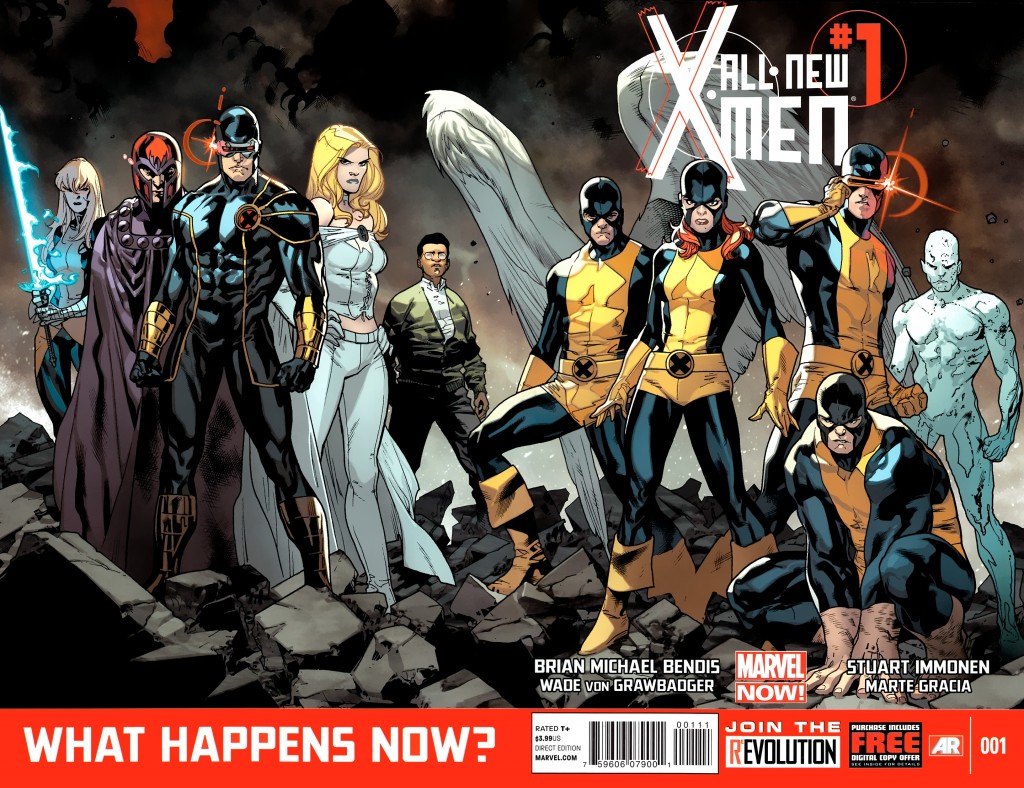 Now THIS is a great X-Men book. ALL NEW X-MEN is the flagship “X-book” after the events of last summer’s AVENGERS VS X-MEN miniseries. If you have not read that mini series I suggest you stop everything and go pick it up right now. It was epic and really changed the face of the Marvel universe. ALL-NEW X-MEN has the consistently great Brian Michael Bendis (HOUSE OF M) lending his writing talents with main pencil art by Stuart Immonen (SUPERMAN: SECRET IDENTITY). Whoohoo!

ALL-NEW X-MEN begins with a current-day Beast dying from yet another stage of his cat-like beastly mutation. Before he goes to kitty heaven, he has the bright idea (maybe?) to go back in time (yeesh) and drag the original X-Men team to the current day so they can see all the horrible things team leader Scott Summers (AKA Cyclops) has done in the hope that he will stop his mutant revolution and calm the crap down. Sounds pretty crazy right? Well, that’s because it is. Beast is convinced Cyclops’ actions will end with a mutant genocide. Usually I frown upon the whole time travel story lines to “fix” problems with comic books, but this time around it all just seems to work and is actually quite intriguing in a fun old-school sci-fi kind of way. My only real complaint with the setup to this story is that Dr. Hank McCoy (THE BEAST) is usually a lot smarter than making this bat shit crazy plan. I mean his solution to knock some sense into Cyclops is to potentially screw up EVERYTHING by messing around with the time stream by bringing the “Classic” X-Men (Cyclops, Jean Grey, Beast, Iceman, and Angel) into modern times. Really? As crazy as it all sounds, it makes for some damn good comic book reading. And in Beast’s defense, he was looped out on the brink of death when he made this horrible decision. And if you ask me, Cyclops was right anyways so there is really no need for all this mess. Thanks Beast, ya goof. You may have killed us all!

ALL-NEW X-MEN really works not only because it’s an interesting sci-fi romp with mutants, but because it gives longtime readers (such as myself) an opportunity to really reflect upon how far the X-Men have come. I mean think about how simple things were back in the 1960’s for the X-Men compared to all the craziness of today’s landscape. The old X-Men have to confront this all at once and it creates some cool stories. The original Cyclops, Jean Grey, Angel, Beast, Angel, and Iceman are all rounded up and thrown into current times forced to confront their future selves. Think about all that has changed for these heroes: Cyclops is now on the run (with Magneto) creating a mutant revolution after killing his father/mentor Professor Charles Xavier (Professor X), Jean Grey is not only dead but the version being brought into the future is only telekinetic NOT telepathic (yet!), Angel transformed into archangel among other dastardly things, Beast turned all blue and fuzzy, and iceman…erg, well ok Iceman is still Iceman. Wow, I like Iceman, but never really thought about how he is generally pretty uninteresting. Ok, tangent over. To get to my point, without spoiling many plot points, it’s so cool seeing the old versions of these mutants (who have never even met Wolverine!) interact with their counterparts. And come on, Jean Grey is back even if is is a more less traditional comeback. In short, I’m intrigued.

This first arc consisting of issues #1-5 is a great setup that really opens up the door for a lot of great story possibilities. It’s also a pretty awesome “jumping on” point for new readers. Something I have always respected about Marvel is just how easy it is to jump back into a title after some time off. They usually provide great recaps before each issue  and never over complicate things so much that I am overwhelmed or turned off (I’m sniffing at you DC). This book is a great example of that. Another strong point here is the consistently good art. It’s not overwhelmingly great or anything, but it is clear, consistent, and nicely framed. Immonen really handles his pencil well and I hope he stays on board for awhile because his style is really great for this book.

So blah, blah, blah, what you really want to know is if this book is worth picking up right? I can safely say that this is the most fun I have had with an X-Men book since Joss Whedon’s (THE AVENGERS) run on ASTONISHING X-MEN. By no means is it better than that, but it’s damn good fun. The story is bat shit crazy in a good sci-fi kind of way, the characters are all well developed, and the art is spot on. I really can’t wait to see what comes next for these characters in the long run. There is so much going on here that things just can’t end well.

ALL-NEW X-MEN #1-5 can be picked off store shelves or bought in a nicely packaged collected volume titled ALL-NEW X-MEN: YESTERDAY’S X-MEN Volume 1 which includes all the issues mentioned in this review.

In the San Francisco area looking for your next ALL-NEW X-MEN comic book fix? If so, Check out MISSION: COMICS & ART. They’ve got you covered!