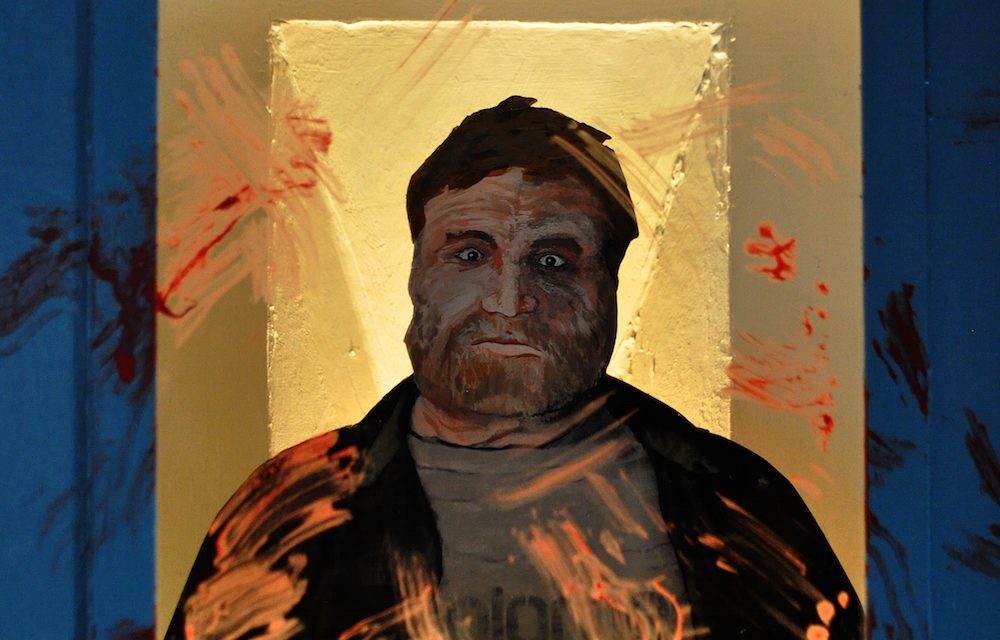 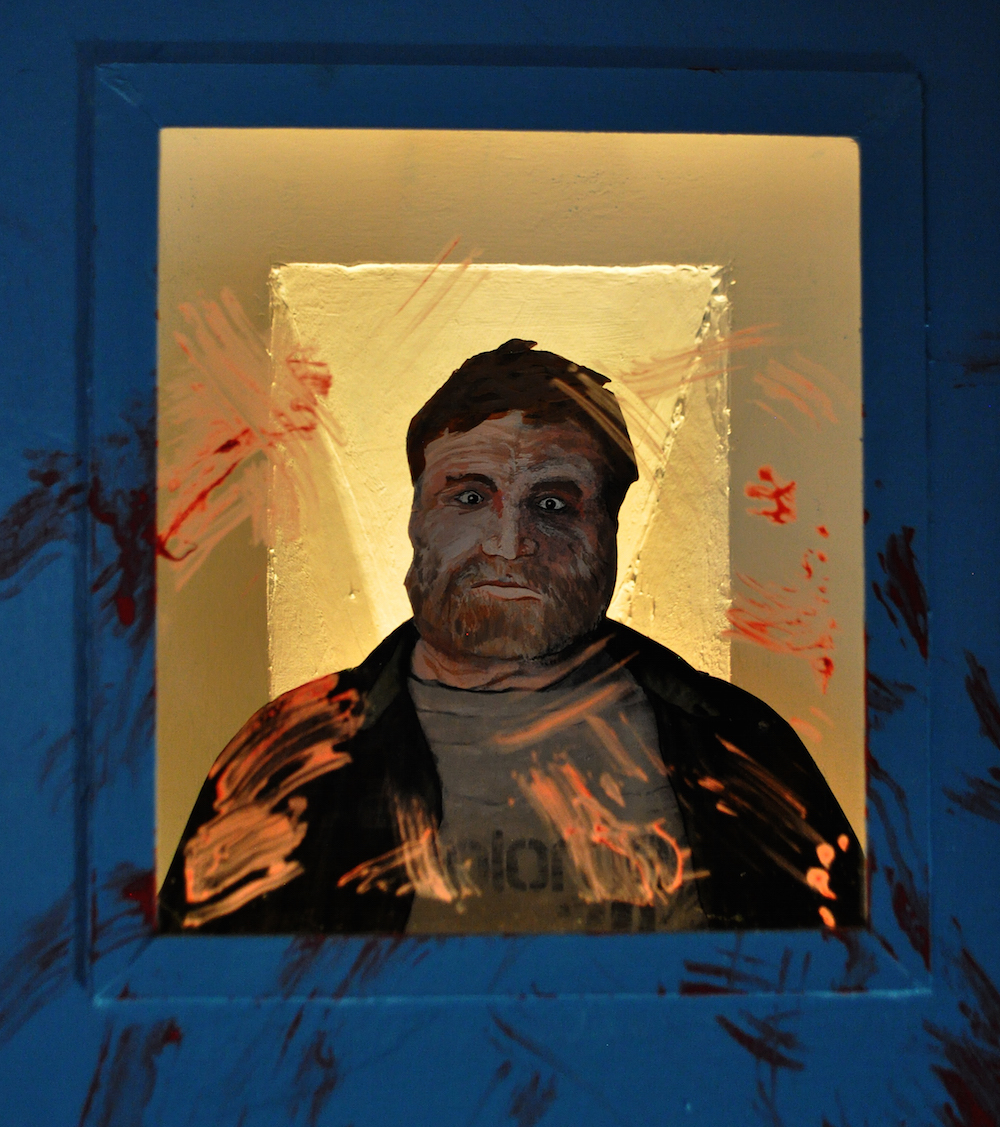 Let’s get this out of the way at the very beginning, while 10 CLOVERFIELD LANE takes place in the same world as CLOVERFIELD, it is in no way necessary to have seen it to enjoy this new film. This is director Dan Trachtenberg’s first full length feature and he delivers a taut thriller full of intrigue, suspense, and some very fun twists and turns.  The movie centers around Michelle, a woman who has hit the road after leaving her fiance, who’s trip comes to an abrupt end when her car is sideswiped by a truck and is forced off the road.  When she finally comes to after the accident, she finds herself in a concrete cell with a brace on her leg that just happens to be handcuffed to a pipe on the wall.  A burly, armed man named Howard opens her door and brings her food, explaining to her that there has been some sort of attack, that he found her wrecked car on the side of the road and rescued her, and that she is safely in his bunker.  She hardly takes this at face value, even when the story is backed up by the bunker’s other resident, Emmett, and she quickly formulates an escape plan.  However, before she can make it out someone tries to come in, and the horrible condition of the desperate woman confirms Howard’s story, so she relents for the time being and stays.  As time passes it becomes clear that Howard is severely unbalanced and not being truthful about things, so Michelle and Emmett connive to build a hazmat suit so they can brave the outside world and escape from Howard.

For a story that only features three people, 10 Cloverfield lane is exceptionally gripping, and this speaks volumes of the writing team.  The original story was penned by Josh Campbell (4 MINUTE MILE) and Matthew Stuecken (THE TOWER OF BABBLE) with rewriting duties falling to Damien Chazelle, who was originally slated to direct but dropped out to make his own film, WHIPLASH.  Whatever combination of their scripts found it’s way to the screen certainly delivers, as the movie grips you fairly quickly and doesn’t let go.  The character development is solid, with backstories coming to light through the characters interacting with each other rather than just being spelled out and glossed over, and it is exceedingly easy to empathize with the protagonists as their flaws are ones that almost everyone has experienced at some point.  Additionally, the truth about Howard and his bunker are revealed layer by layer, like an onion slowly being peeled apart, while simultaneously maintaining the mystery of what is going on outside the bunker, creating a feeling of perpetual curiosity and engagement throughout the movie.

Despite mostly taking place in a small, cramped bunker, the film manages to look great and have a wide variety of camera work that keeps things fresh and interesting.  Much of the camera work is used to highlight the relationships between the people in the bunker, close ups of personal contact, two shots and three shots that are framed to emphasize how the characters’ current social dynamic, and high and low angle shots that underscore the power dynamics between the three of them.  What elevates the movie to another level is the creativity of the framing, we see scenes happen from another room, some unusual angles that add to the tension of the film, and tracking shots that cover the characters while keeping you keenly aware of the smallness of the space.  There are some intense moments in the movie, and I liked how the cuts came quick and fast to keep you on the edge of your seat, but that all the action was very easy to follow, allowing the audience to effortlessly lose themselves in the story..

The acting in 10 CLOVERFIELD LANE was outstanding, which was a necessity given how small the cast was.  Mary Elizabeth Winstead (A GOOD DAY TO DIE HARD) took on the part of Michelle and she does a wonderful job with the performance.  Winstead brings a great deal of range to the screen in the part of Michelle, she is at turns strong, terrified, vulnerable, tender, vicious, conniving, and determined and through all these emotions and all the twists and turns Michelle remains utterly believable and real.  I’ve been a fan of Winstead ever since SCOTT PILGRIM VS THE WORLD and have often wondered why she didn’t land many leading roles, hopefully this performance makes directors take a second look at her because she is clearly capable of delivering powerful performances.  Stepping into role of Howard was John Goodman (TRUMBO), and it’s no understatement to call this man a national treasure.  Goodman plays unhinged so well that it makes you question his personal sanity, and that ability is on full display here.  He gives Howard the right mixture of authority, delusion, power, and paranoia but tempers it with enough humanity to give us a character that truly gets under your skin and leaves you feeling uneasy.  His cold authority, random outbursts, and attempts at humanity reveal a depth of skill and prowess that will captivate even the staunchest of critics.  Lastly, John Gallagher Jr. (TV’s THE NEWSROOM) tackles the part of Emmett, and his performance is surprisingly heartfelt.  Emmett is a man who resolved to live his life in a small town and stay there and is something of the everyman in the story and Gallagher gives him a relaxed sincerity that makes him instantly likeable while not being overbearing enough to overshadow the intense struggles of the other principles.  Gallagher’s performance is least flashy, but it is perfect because Emmett is everything he should be and nothing more.

While 10 CLOVERFIELD LANE may not be everyone’s cup of tea, it’s certainly one of the best films of the year so far.  The story is compelling, the acting is fantastic, and it has top notch production.  If you like thrillers, science fiction, or just want to watch John Goodman be one amazingly crazy doomsdayer, then you should definitely head out to your local theater asap and give this a watch, you’ll be glad you did.