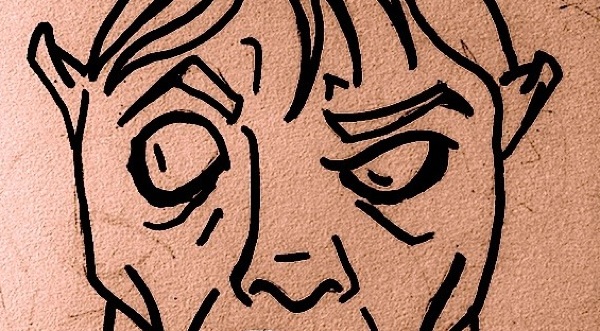 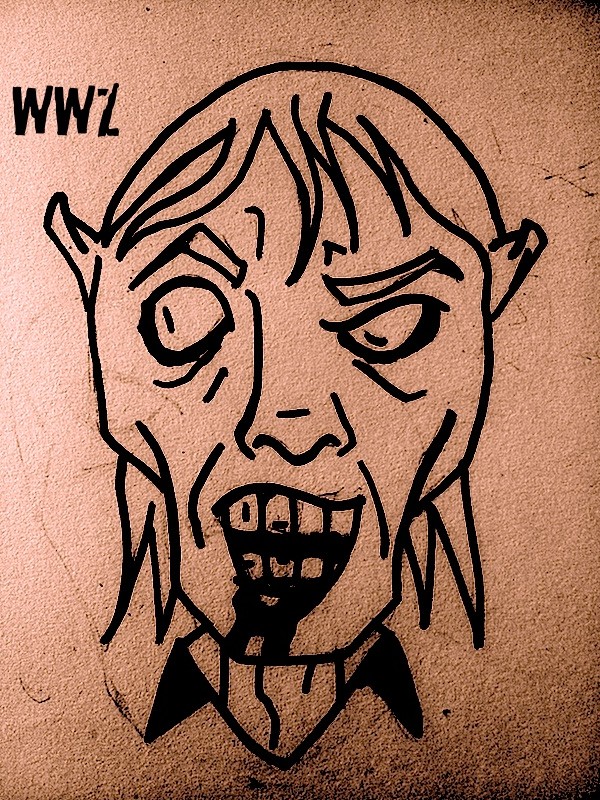 Disclaimer: I have never read “World War Z” by Max Brooks, so I can not do any kind of comparison in this review (I have read, and love, The Zombie Survival Guide).

Brad Pitt (KILLING THEM SOFTLY) returns to the big screen with WORLD WAR Z, a big budget zombie apocalypse movie. The film focuses on Gerry Lane, a retired UN investigator who is forced back into action by the zombie pandemic. Gerry, his wife, and their two children are in downtown Philadelphia when they first encounter the outbreak, and are immediately forced into survival mode. With a little bit of luck they make it out of the city and end up in New Jersey, only to encounter more zombies. They take shelter with a Hispanic family in an apartment complex before making a mad dash to the roof to a waiting evacuation helicopter, sent courtesy of Gerry’s former boss at the UN. They are taken to a floating armada that is the current command center for what remains of the US government and the UN, and Gerry is forced back into action to secure a place for his wife and children on the ship. He is sent out with a SEAL team and a scientist to investigate a message about zombies that was sent from a base in South Korea, but after getting no real answers he is sent along to Israel, who seemed to have known about the zombies and prepared for them. After a brief investigation, all hell breaks loose and Jerusalem is quickly overrun by zombies and Gerry and a lone, injured Israeli soldier make it on to the last plane out of the airport. Gerry comes up with the theory that the zombies are not attacking terminally ill people, and has the plane routed to the nearest World Health Organization (W.H.O.) center near an airport, which is in Wales. An outbreak occurs on the plane before it can land and it crashes into the Welsh country side. Seriously injured, Gerry and the soldier, Segen, make their way to the W.H.O. coordinates and, after receiving treatment, attempt to recover disease samples from an infested wing of the facility in order to test Gerry’s theory.

WORLD WAR Z is directed by Marc Forster (QUANTUM OF SOLACE) and its not hard to see why he was picked to helm the picture. The camera work is great, whether its sweeping wide shots, intense close-ups, or fast paced action shots, the camera is constantly complimenting the tone of the story; even the quick cutting that is used in some places seems appropriate and forgivable because it is never so much that you lose track of what’s going on, but it is enough to bring about the feeling of panic and confusion that is associated with intense emergency situations. I have seen most of Forster’s films, and they are usually hit or miss with me, I love FINDING NEVERLAND and STRANGER THAN FICTION, but was not overly fond of MONSTERS BALL or MACHING GUN PREACHER; I believe that he is an extremely talented director who just has odd tastes in projects, but based on WORLD WAR Z I hope to see him behind the helm of a picture that is more to my tastes in the future, because I think he is a bit underrated at the moment. 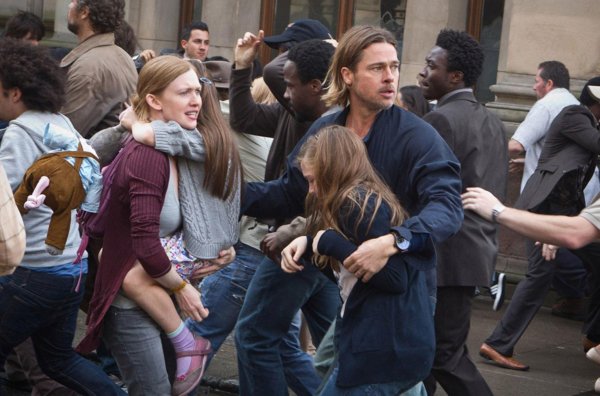 While the directing was impressive in WORLD WAR Z, the plot, unfortunately, was not. It is no secret that there were production issues with the movie, the original ending, which was a giant battle in Russia, was scrapped once the studio and production team realized it wouldn’t work, and a new ending was scripted and filmed. These issues caused the production costs to reach an incredible 200 million dollars, and the end product is nowhere near impressive as that number. The opening sequence of the film is by far the best part, it starts quickly and builds in suspense and intensity until they finally reach the armada in the Atlantic. The first big plot issue happens when they are trying to leave South Korea and head to Israel, Gerry ends up attracting the zombies (they respond to sound) when his phone goes off. This seems like a ridiculous rookie mistake, yet he is supposedly a seasoned field operative, and if that isn’t bad enough, the refueling of their large aircraft only takes a couple minutes, which is highly unrealistic, since it would take far longer to take on enough fuel to get from South Korea to Israel. The next big plot snafu happens in the plane on the way to Wales. As the flight is beginning to head in for landing, a zombie is accidentally unleashed from a cabinet on the plane by a stewardess, as I said before, the zombies are attracted to noise, so we are somehow supposed to believe that not only did the zombie not hear anything that made it react during a 5 hour flight and if it did none of the passengers within five feet of the door heard it, and that none of the stewardesses had reason to open that door before the very end of the flight. The last big plot issue I want to touch on is when Gerry and company are trying to get the samples from the zombie infested part of the W.H.O. facility. When Gerry reaches the security door, after his team has been chased away by zombies and he has had to kill a couple, he gets a phone call from the people watching the security cameras at the other end of the facility so they can tell him the code to get in. Now, if the zombies are attracted to noise, why didn’t they use the phone system to lure all the zombies to a particular part of that wing of the facility that they didn’t need to go by in order to reach the samples? I have no problem overlooking a small plot hole here or there, but when there are multiple, gaping plot holes through out a movie it just ruins the experience for me. On top of that, the ending, while a bit intense, was certainly anticlimactic when compared to the events in Jerusalem and on the plane. While I appreciate what they tried to do with the ending, it just didn’t deliver the kind of knock out blow you were expecting from everything leading up to it. Lastly, I want to touch on the zombies; there have been many zombies in cinema, from the stumbling brain eaters to the sprinting flesh consumers, but in WORLD WAR Z we get a new kind, the pathogen zombie. These zombies are not out to eat you in any way, they just want to bite you and move on so that they can further spread the infection. While this is an interesting take on zombies, it certainly robs fans of what one expects most from modern zombie movies, disturbing violent deaths. Now I am not saying that this was a paramount necessity in the film, but I do think it would have made the movie more approachable for zombie fans and would have helped draw attention away from the plot holes. 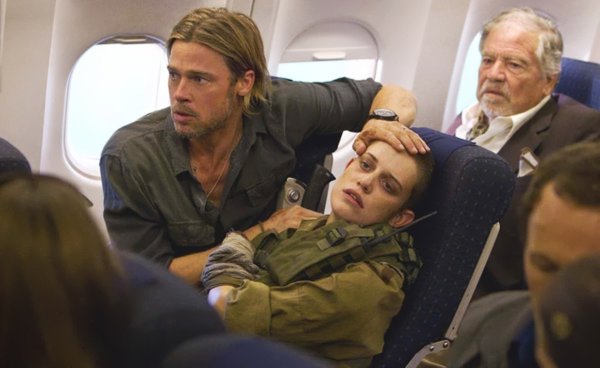 While the plot was lack luster, we do get some good performances out of WORLD WAR Z. Brad Pitt is the center of the film as Gerry Lane, and while the performance isn’t as verbose or charismatic as many of the characters we have seen him play, I think it is an interesting role that is handled with a professional hand. Gerry is very much a reluctant hero, he is forced into a situation he doesn’t want to be in, and is constantly having to deal with people who are either scared, paranoid, overconfident, or some combination there of, all while trying to survive a very determined enemy. Pitt plays the role with a measured intensity that never comes off as overbearing, he is the rock that keeps the movie grounded. Mireille Enos (GANGSTER SQUAD) plays Gerry’s wife, Karin. While we see far less of her than Pitt, she is everything you would expect a concerned wife, mother, and woman, to be. Her care and fear for her family is constantly etched on her face, but she is also commanding and fierce when she has to be. I really liked her performance and would have like to have seen more of her in the film. Lastly, Israeli actress Daniella Kertesz plays Segen, and while the character is subtle, she makes her memorable. Segen is a soldier, and Kertesz plays her as one, and a tough one at that. Despite losing a hand to prevent infection from a zombie bite, she maintains a hard edge throughout the film, and Kertesz never makes you doubt her for a second. I don’t know if Kertesz will continue to perform in American films, but I will certainly keep an eye out for her.

I really wanted WORLD WAR Z to be better than it was. It had some good performances and impressive directing, but the story left much to be desired. If you are a huge fan of Brad Pitt or if you just have an overwhelming amount of curiosity about the movie, then by all means head out to a theater and give it a watch, but otherwise you might want to wait for Netflix or give it a pass.