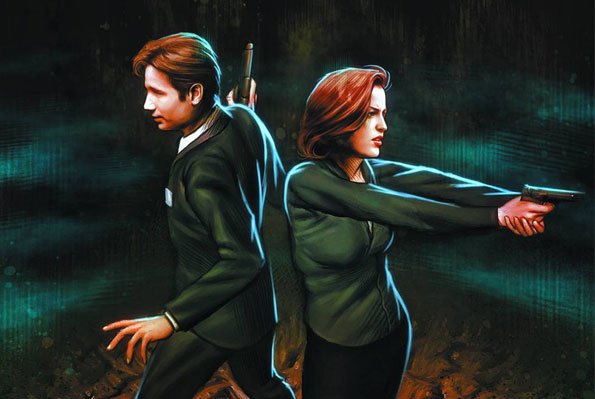 Back in February IDW announced a new on-going series set in the THE X-FILES universe that will continue the adventures of agents Mulder and Scully. This new series will be labeled THE X-FILES: SEASON 10 and is considered to be official canon. While there is no official word yet on if there will be any resurrection for the live-action series in the form of a TV show or another movie, fans can tide themselves over with this.

Check out the official (and shorter!) plot synopsis:

For years they investigated the paranormal, pursued the ‘monsters of the week,’ and sought the truth behind extraterrestrial activity, along with the grand conspiracy surrounding it rooted deep within their own government. But when AGENTS MULDER and SCULLY reunite for a new, ongoing series that ushers THE X-FILES into a new era of technological paranoia, multinational concerns and otherworldly threats, it’ll take more than a desire ‘to believe’ to make it out alive. The X-Files: Season 10 also sees creator Chris Carter return to the fold as Executive Producer!

I have always been a fan of THE X-FILES, and this new project feels right at home. Other TV shows have had a lot of success continuing their stories in comic form such as BUFFY, FIREFLY, and more recently SMALLVILLE (Batman in Smallville!). Having show creator Chris Carter on board as the exectutive producer for the series solidifies this comic book project as something fans simply cannot miss.

If you need to catch up on your X-FILES history, Netflix currently had all 9 seasons available streaming on their site.

THE X-FILES: SEASON 10 #1 hits store shelves this week! The truth is out there…and so is the comic so go get it!

In the San Francisco area looking for your next X-FILES comic book fix? If so, Check out MISSION: COMICS & ART. They’ve got you covered!