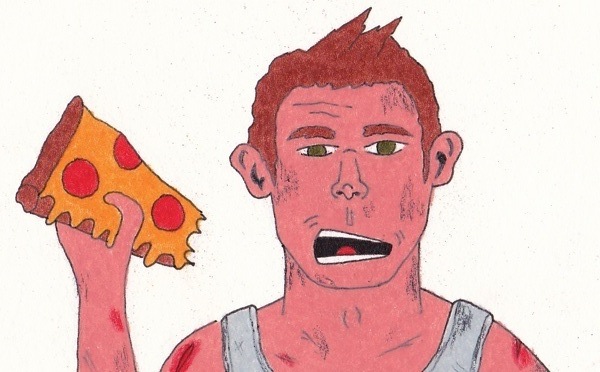 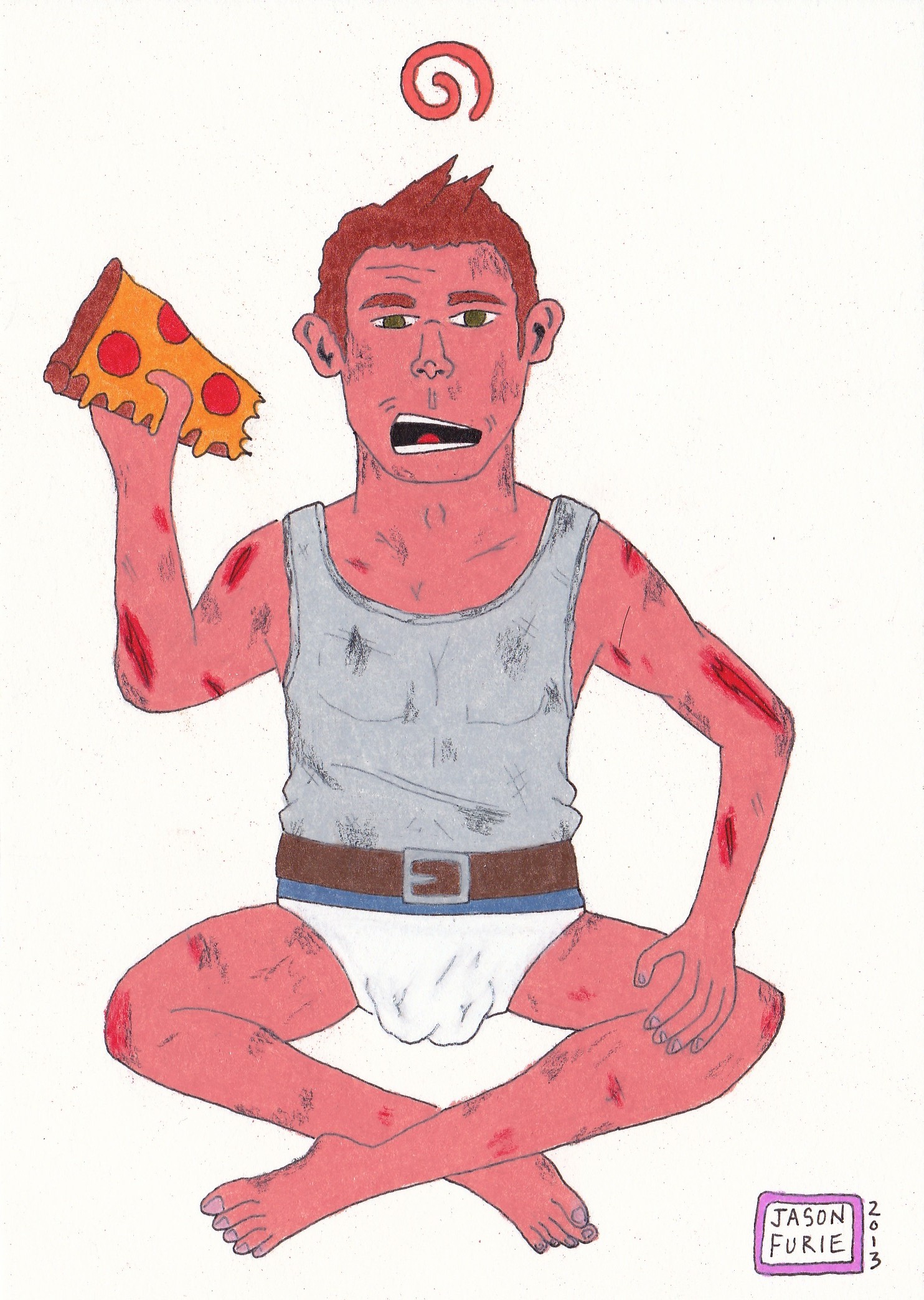 A lot of people might be thinking that we did this dance a few months before with OLYMPUS HAS FALLEN…and the truth is that we kinda did.  Indeed, when you have two action films released that each deal with a lone hero dead set on rescuing the White House from terrorist clutches, comparisons can’t help but be drawn up.  Thankfully, the sense of deja vu I got while watching WHITE HOUSE DOWN didn’t detract at all from my enjoyment of it since the over-the-top spectacle, ridiculous action sequences and cheesy dialogue and characterizations elevate this film into the category of “so bad, it’s good.”

Don’t get me wrong.  I am wholeheartedly recommending that you check out this film at some point.  But let’s face it: Director Roland Emmerich (INDEPENDENCE DAY, THE PATRIOT) isn’t really known for churning out high art.  The man’s credo for the past few years has been “bigger and better” when it comes to action and effects.  And while I’m a fan of his earlier endeavors (STARGATE, in particular, is a guilty pleasure of mine), his films of recent memory such as THE DAY AFTER TOMORROW and 2012 have fallen flat for me.  These outings always just seemed like joyless, wooden affairs despite their eye-catching visuals and the seemingly worldwide stakes.  With WHITE HOUSE DOWN, it seems as though Emmerich has tapped back into good old-fashioned big-budget B-movie fun.

The film centers around U.S. Capitol Police Officer John Cale, played by Channing Tatum (SIDE EFFECTS), as he interviews for a position in the Secret Service for current U.S. President James Sawyer, played by Jamie Foxx (DJANGO UNCHAINED).  But everything soon goes to hell when a group of mercenaries lay waste to Capitol Hill, establish a base of operations in the White House and hold a group of tourists hostage which include Cale’s estranged daughter played by Joey King (OZ: THE GREAT AND POWERFUL).  Pretty soon it is up to Cale and President Sawyer to join forces and put a stop to their nefarious plans. 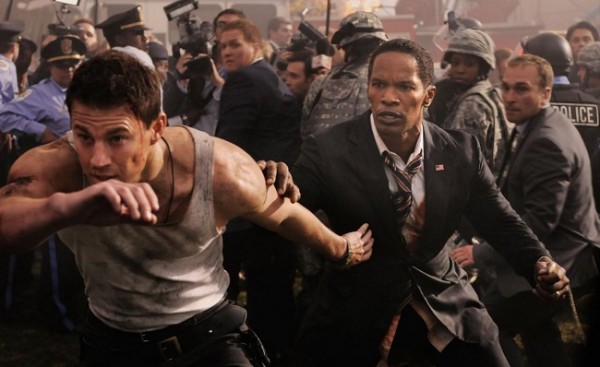 For the most part, the cast is serviceable.  Jamie Foxx is without a doubt one of the more entertaining actors in the film, playing up the role of Sawyer as a skiddish and slightly neurotic version of Obama while still being able to deliver much needed drama and charisma to slightly more serious scenes.  Tatum is a little more uneven as Cale.  He’s got a good look to him physically as an action hero and his comedic banter with Foxx is entertaining enough, but he just lacks a certain amount of intimidation that other action leads have…the “John McClane factor,” if you will.  Joey King does okay as Cale’s daughter Emily, but her character can be pretty annoying in the beginning of the film.  Granted, she is supposed to be something of a know-it-all when it comes to politics.  That still doesn’t make it any less obnoxious.  Maggie Gyllenhaal (THE DARK KNIGHT) is fine enough as a Secret Service Agent, assertive and determined but nothing really beyond that.  Jason Clarke (ZERO DARK THIRTY) turns in a fairly intimidating and entertaining turn as one of the terrorists when he develops a mad-on for Cale because…well…because he’s a villain, I guess.  And here’s a big surprise: James Woods (STRAW DOGS) plays the villainous mastermind.  What a shock!  Of course, when your character is given an introduction similar in tone to Ed Harris’ introduction from THE ROCK and you are James Woods, there is no doubt in anyone’s minds that you are the villain.

Honestly, that is part of the silly charm of WHITE HOUSE DOWN.  Sure, the characters and situations are by-the-numbers and par for the course, but the film appears to celebrate the inherent ridiculousness of the plot.  Out of the two movies, this one appears to have more of a sense of fun about it than OLYMPUS HAS FALLEN.  Sure, OLYMPUS was a fun watch, but it seemed to have a sense of seriousness to its violence and appeared to be set in a more stable type of reality.  There were times when I seriously thought main characters were not going to make it out alive.  In WHITE HOUSE DOWN, at no point do you think that Tatum and Foxx are going to bite it.  But when you have sequences involving the FRIGGIN’ PRESIDENT OF THE UNITED STATES leaning out of the Presidential limo and firing a rocket launcher, you’re not looking for emotional stakes to be raised.  In fact, the film can sometimes feel a little too long when it tries to incorporate heavy drama or needless plot points.  The first 20 minutes or so does very little to develop character so it feels unnecessary.  A terminal illness is introduced to Woods’ character to either garner sympathy or elevate his desperation but it is quickly forgotten and seemed ultimately pointless in the grand scheme.  And at times, the film’s jovial mood with regards to violence can turn deadly serious on a dime.  Most of the viewing, you’re just waiting for Emmerich to out-do the last action scene with something far grander and, albeit, more stupefying. 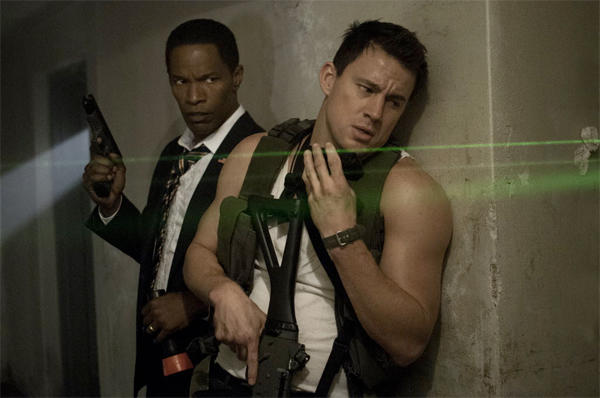 This is a world where people can take fire from a gatling gun up close and still be in one solid piece.  This is a world where your stereotypical villainous hacker character conducts various computer banks like an exaggerated Mozart crossed with Andy Warhol.  This is a world where Tatum and Clarke can throw each other through skylights and steel tables and walk away without a scratch.  In short, this is the gloriously overblown and melodramtic world of action movie cliches that have sprouted up since trendsetters like DIE HARD first came into existence.  As mentioned before, it even takes cues from other later action flicks such as THE ROCK (both in Woods’ introduction and in a series of extremely goofy Deus Ex Machinas towards the end of the film).

At no point did I ever take this movie seriously and I’m all the better for it.  This is mindless entertainment for mindless entertainment’s sake.  And there is absolutely nothing wrong with that if it’s executed in an extremely silly and enjoyable way.  If you’re looking for an emotionally-fulfilling and patriotic send-up, WHITE HOUSE DOWN is not it.  In fact, a few of the audience members at my screening may have thought that way since they would give the rest of us scolding looks while we hooted with laughter and rolled in the aisles in response to the goofy shenanigans taking place.  This film is fully aware of what it is and what it offers and has a blast doing it.  If there is anyone out there like me with a taste for over-the-top action silliness and grandiose-yet-cheesy spectacle that has a sense of humor about itself, then this latest installment in the “White House invasion” genre (at least, I think that’s a genre now) may be right up your alley in terms of “guilty pleasure.”