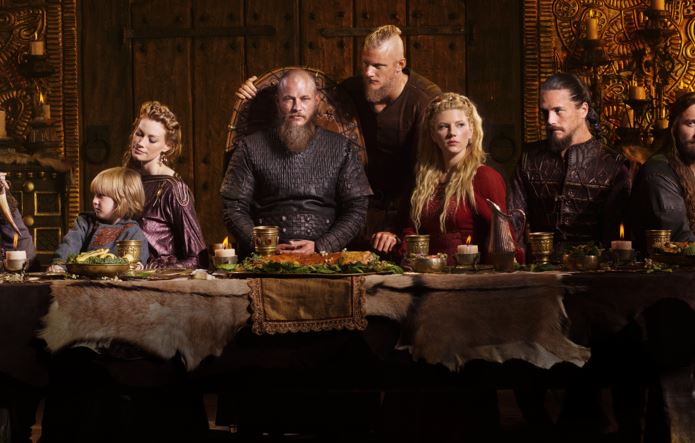 Even the best shows have their ups and downs, and it seems like History’s hit series, VIKINGS, may finally be entering a valley.  Season four opens with the raiders triumphant return to Kattegat, and a wounded Ragnar lying in bed, fighting for his life.  With Ragnar indisposed, the machinations of those around him start to stir and come to the surface.  Queen Aslaug is positioning herself to lead if Ragnar fails to recover, Bjorn is looking to build his reputation by flouting his success and trying to follow in his father’s footsteps by condemning Floki, Kalf is making a play for Lagertha’s heart and draws out his enemies by declaring them both co-earls, and Rollo is up to his old tricks again as he is using his marriage to the french princess as a means to wield the military superiority of his new allies in a bid for power.

As much as I wanted to like the season four opener, it left me flat, not because nothing happened, but because too much happened and it has all happened before.  Bjorn makes a youthful mistake, Aslaug is playing the game of thrones, Rollo seeks his own glory and will betray anyone to get it, and Kalf and Lagertha are still dealing with a tempestuous earldom.  These are all plot devices I have seen in the previous seasons, and the incapacitation of Ragnar does not suddenly make them compelling, especially since he has overcome monumental odds several times already.  There were a few interesting scenes, such as Rollo’s wedding and wedding night, Kalf and Lagertha’s power consolidation, and Ragnar’s vision of valhalla, but all those can’t save an episode that is by and large treading over tired, familiar ground.

VIKINGS continues to have impressive production values, so much so that it is easy to take them for granted.  The settings are perfect, with the vikings’ houses and halls looking like they came out of a history book, simple wood buildings that may have some carving for decoration.  The weaponry is still very on point, and I particularly liked the introduction of the crossbow, which was more devastating that simple bows, and demonstrated how important range can be in combat.  They kept the design of them simple, ones that are manually operated without the cranks and other bells and whistles that came later in the medieval era.  The costumes are wonderful, from simple peasant garments to the wedding garb of a princess, everything looks period appropriate and isn’t overly done, which does a wonderful job of helping keep the viewer in a state of suspended disbelief.

With so much going on in this episode, no one character had a great deal of screen time, but there were still some notable performances.  Travis Fimmel (HARODIM) gets a chance to show a bit more range in his portrayal of Ragnar, as he is no longer strong and in control but weak and on the defensive.  Fimmel easily makes Ragnar’s injuries appear as devastating as they are, he looks weak and barely mobile, but his eyes contain an even sharper edge of cunning, giving us a very fun version of this beloved character.  Returning to the part of Floki is Gustaf Skarsgård (THE WIZARD’S DAUGHTER) and he continues to be a highlight of the show.  Skarsgård effortlessly brings Floki’s conflicting nature to life, he is brave, but afraid, remorseless, yet loving, and these dualities seem perfectly appropriate for so erratic a mind; the fact that Skarsgård continues to do such an outstanding job with such a difficult role speaks volumes of his acting skills.  Clive Standen (EVEREST) returns to the part of Rollo, and he is incredibly fun in the season opener.  Rollo is finally in his element, with his own plans unfolding far from the eye of Ragnar, and Standen easily brings this to life, infusing Rollo with an air of arrogance and optimism that makes him incredibly entertaining.  Lastly, despite having only a few minutes of screen time, I loved Katheryn Winnick’s (THE ART OF THE STEAL) portrayal of Lagertha in this episode.  Lagertha is a powerful woman who isn’t fully aware of all the events moving around her, however, when opportunity presents itself she knows how to exercise her power to devastating effect.  It was great to see Winnick make Lagertha burn with power and pride, and I can’t wait to see what the season has in store for her.

As VIKINGS heads into its fourth season we are starting to see some chinks in the armor.  While the production values remain high and the actors deliver decent performances, albeit short ones, the story is lackluster as everything that is happening are things we have seen before.  Hopefully as the season continues they’ll find some new ground, because as of now I’m not very excited with the direction it’s heading.