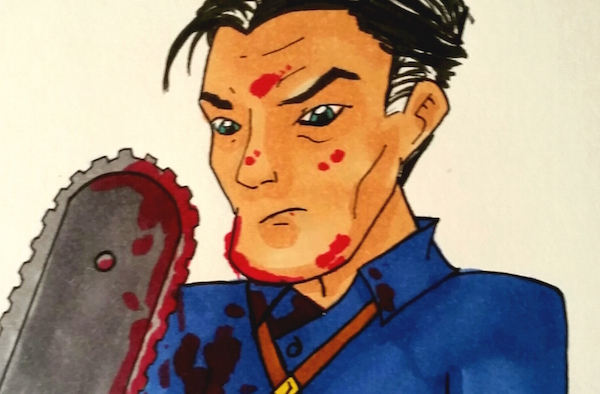 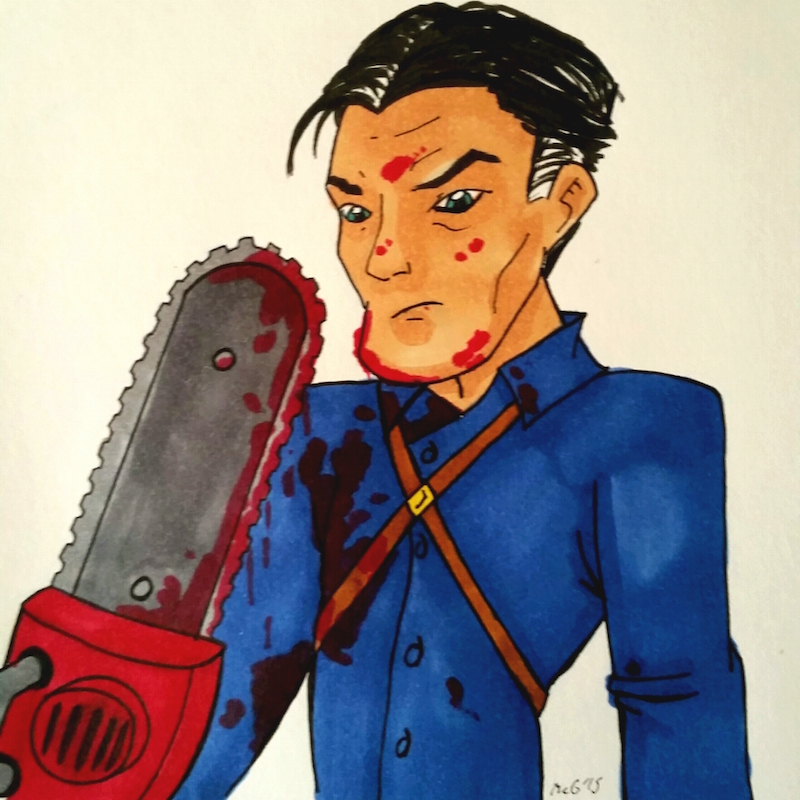 With the return of MAD MAX and STAR WARS, 2015 was a year of patience paying off for fans, and cult classics weren’t left out thanks to Starz bringing us ASH VS EVIL DEAD, complete with Bruce Campbell (OZ THE GREAT AND POWERFUL) reprising his iconic role of Ashley “Ash” J. Williams.  The show wastes no time jumping right back into the terrifying world of The Evil Dead, with Ash inadvertently reading from the Necronomicon while stoned to impress a girl.  With the Deadites unleashed on the earth once more, Ash tries to flee but isn’t fast enough to escape the persistent foes, and finds himself teaming up with Pablo Boliviar, a co-worker and former Brujo’s apprentice, and Kelly Maxwell, a friend of Pablo who ends up neck deep in Ash’s troubles.  The three cut a jagged swath across Michigan as they try to find a way to seal up the Deadites, encountering a full fledged demon, a crazed militia that is armed to the teeth, and an occultist who seems to know a great deal about the Deadites and the Necronomicon.  Of course, the inevitable happens and Ash is forced to return to the cabin, the place it all began, in order to try and put an end to this madness once and for all.

What I really liked about this series is that it captures the look and feel of the Evil Dead films.  Sam Raimi, the creator of the original Evil Dead franchise, set the tone of the show by writing and directing the debut episode, and he set the bar exactly where it needed to be.  Some of the creative effects that harken back to the original are the first person stalking evil camera perspective, which does a wonderful job of creating an ominus feeling, practical effects are primarily used for the deadites, giving us very realistic looking monsters, and using the landscape itself as a character, such as spinning windmills or thumbing chair swings to deliver a heightened tension to the show.  These hallmarks of the franchise are still used, but in a highly updated fashion, like when the evil force gets personified as an ominous cloud as the camera shifts back and forth from first to third person perspective, or the more mature lighting and changing color schemes that give the show a more varied and adjustable mood than the movies had.  All this combines to give us a show that looks far more polished than the original films, while still keeping it just a bit on the silly side to maintain the humor horror balance that made it such a fan favorite to begin with.

This section is going to be a bit spoilery, and I apologize for that, but there is just no way to discuss the wonderful story without giving some major developments away.  I was quite impressed with the way Ash’s age was handled, because rather than have him be the same badass we came to love on the big screen, they poke fun at his aged and soft form, even going so far as to open the series with him putting on a girdle.  This new found physical vulnerability opens the door to side kicks, creating the perfect setup for the trio that form the core of the show.  Another story highlight is the progression of the antagonists.  Ash has always fought against deadites, but the show kicks it up a notch not once, but twice, by first introducing Eligos, a demon summoned from the Necronomicon that serves as a midseason protagonist, and then when the show reveals that Ruby, the witch who has been stalking Ash, is the original author of the Necronomicon, leading to an epic showdown in the creepy basement of the cabin.  This great progression of the original mythos not only hooks long time fans, but raises the stakes to a point that anyone who watched the show would easily be gripping the couch cushions as the grand climax plays out.

Returning to the role that made him famous, Bruce Campbell is just as fun as Ash Williams as he ever was.  He is god’s gift to scoundrels as he eats up scenes with his one liners, bravado, and unique style of ass kicking, he is everything fans could have hoped for after all this time and he makes every episode a worthwhile viewing experience.  Joining the cast as Pablo Boliviar is Ray Santiago (SEX ED) and he does a pretty nice job with the part.  Pablo is a bit too shy for his own good, but there is definitely a spark deep inside him, and watching Santiago tease and grow that part throughout the show was a lot of fun.  Dana DeLorenzo (TV’s IMPRESS ME) plays Kelly Maxwell and she is a blast as the snarky firecracker.  Kelly is brutally thrust into the Ash’s world of deadites and terror, but she manages to keep her head about her most of the time and comes through when she really needs to.  DeLorenzo infuses her with strength and moxy, giving us a character that can even rival Ash at times for screen dominance.  Lastly, Lucy Lawless (TV’s AGENTS OF SHIELD) steps into the role of Ruby, and she is simply wonderful.  Lawless brings a calm, determined attitude to the witch who has long hunted Ash in an effort to regain her book.  She easily goes from genteel and persuasive to brutal and daunting, giving us an antagonist who is incredibly engaging and fascinating.

ASH VS EVIL DEAD is everything fans could hope for.  The productions values are a polished homage, the story takes you further down the mythological rabbit hole from the original films, and the acting is everything you could want in a comedic horror series.  If you like the films at all, are a fan of Bruce Campbell or Lucy Lawless, or simply want a show that is a hell of a lot of fun, then definitely give this series a try, you’ll be glad you did.