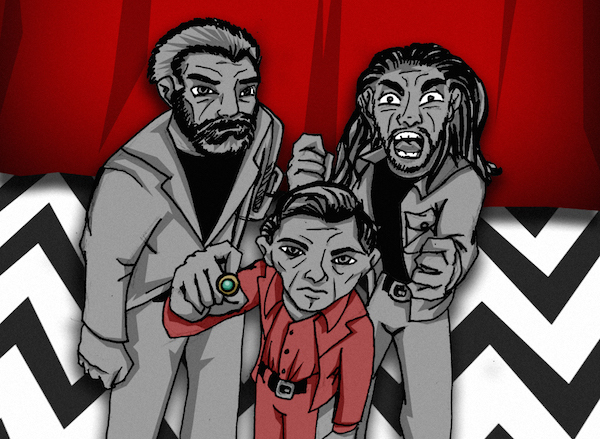 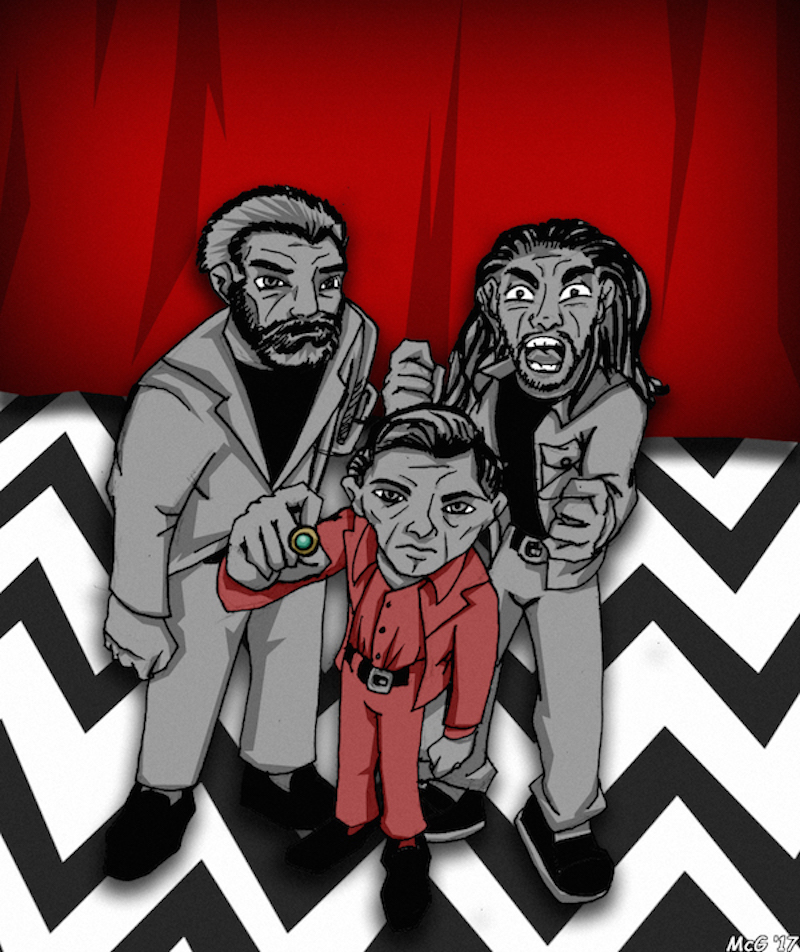 TWIN PEAKS: THE RETURN massively trolled its viewing audience…and I couldn’t be happier.

For young’uns out there, TWIN PEAKS was an extremely popular primetime TV series that ran on ABC from 1990-1991.  Co-creators David Lynch (ERASERHEAD) and Mark Frost (HILL STREET BLUES) chronicled the many adventures of Special FBI Agent Dale Cooper (Kyle MacLachlan) after he is sent to the titular town to investigate the murder of local homecoming queen and town sweetheart Laura Palmer (Sheryl Lee).  As he delves into the mystery, the very astute and upbeat Cooper encounters a wide variety of colorful and quirky characters, gets mixed up in several of the seemingly-idyllic Hamelin’s shadier dealings, and indulges in the occasional “damn good” coffee and cherry pie.  Oh, and every once in a while he’ll have bizarre backwards-talking dreams with a red-suited little person who reveals major clues in esoteric dialogue.  No biggie…

Needless to say, there was nothing quite like TWIN PEAKS on at the time.  It was a satire of TV mysteries and melodramas.  Lynch and Frost never actually intended to solve Laura’s murder.  That was merely the backdrop for all of the unusual-yet-relatable characters to work off each other.  And for that first season, the audience loved it.  But studio executives got nervous and urged the show runners to build up more to the reveal of Laura’s killer.  As expected, viewership faltered once that card was played.  And even though the revelation opened a whole new supernatural alcove in the TWIN PEAKS universe (chock-full of evil spirits and doppelgängers), there was no salvaging the show’s abysmal 2nd season ratings.  TWIN PEAKS ended on a cliffhanger with its main hero Cooper (and the show’s future) trapped in limbo.  David Lynch would revisit the property a year or so later in the prequel/sequel film TWIN PEAKS: FIRE WALK WITH ME, but that didn’t seem to satisfy.  Now, 25 years later, Lynch & Frost continue the story in an 18-episode season for Showtime that reunites most of the original cast and introduces some new characters and plot threads…

But is that really what happened?

Think what you will of his films, but I believe most of us can comfortably classify Lynch as “unconventional.”  I personally love a lot of what he does whether it’s emotionally-charged characterization (THE ELEPHANT MAN), unsettling crime-romance (BLUE VELVET), or bizarre studies on duality and identity (LOST HIGHWAY, MULHOLLAND DRIVE).  And though I was probably too young to absorb TWIN PEAKS in its original TV run, visiting the series on DVD years later gave me a greater appreciation for his style.  Seeing Lynch have to rein in his weirdness to appease a mainstream network’s standards was a well-executed balancing act.  Now he is given total creative control to show and say what he wants with the series.  As you’d expect, it gets graphic, strange, and downright uncomfortable.  And that is the whole point.

THE RETURN goes all over the place with its plot (with an ensemble cast of 100+, how can it not?), but the main focus comes from Cooper fighting his way back to reality after being trapped in an otherworldly realm while his evil double has been causing trouble in his place this whole time.  We touch base from time to time with some series favorites like Audrey Horne (Sherilyn Fenn), Bobby Briggs (Dana Ashbrook), and FBI Deputy Director Gordon Cole (Lynch himself) as well as get introduced to new players such as Vegas hotshots the Mitchum Brothers (Robert Knepper & Jim Belushi), distraught housewife Janey-E Jones (Naomi Watts), and ???? and ????’s sociopathic son Richard (Eamon Farren).  There’s even room to introduce a longstanding character that we’ve heard much about, but never actually seen (diehard Lynch fans are sure to appreciate the casting).  Several cameos are sprinkled throughout the season ranging from David Duchovny reprising his role of FBI agent Bryson for one scene to younger actors Amanda Seyfried and Michael Cera popping up as the wayward offspring of certain OG PEAKS characters to Monica Bellucci showing up in a dream sequence as herself.  It all may sound like out of control stunt-casting to a layman, but every little bit actually works very well to propel the narrative of Cooper eventually clashing with his dark reflection.

That being said, the main narrative isn’t even the driving force for the series.  Lynch is in no hurry to get into grand confrontations and reunions you would expect from a typical TV show revival.  The many theories surrounding how and why so much weird stuff happens in this world–as much as I enjoy them–are completely inconsequential to the intent.  Lynch thrives and revels more in the smaller moments, the quirky interactions, and the beauty in simple storytelling and visuals.  For a large portion of the show, Cooper’s iconic personality is sidelined in favor of an unbearably mundane existence.  MacLachlan takes the character on a strange odyssey in which he unknowingly stumbles into conspiracies, mortal danger, and romance and comes out completely unscathed and oblivious.  It’s stupid and silly, but the characters–with their many idiosyncrasies–are so relatable and likable that I can’t help but smile when something works out in their favor.  As much as I was looking forward to Cooper of old returning, I genuinely enjoyed seeing his suburban alter-ego get resolution.  That’s where the true spirit of TWIN PEAKS lives…not in the destination, but in the journey itself.

And that is what is going to probably make or break a lot of folks’ appreciation of the show as a whole.  THE RETURN is not just a revival, it’s Lynch’s meta-commentary on how we view and interact with many TV shows today.  At times, it will play into some of the tropes we expect when a show is building towards a grand finale where “all will be revealed.”  Lynch pulls that rug out from under us with a finale that originally left me speechless and confused followed quickly by laughter.  I’m sure many people were disappointed or felt betrayed.  I’ll admit that I felt a pang of buyer’s remorse when the final credits rolled.  But I immediately got the joke.

David Lynch doesn’t feel a need to explain anything to us, nor should he.  He doesn’t have to spoon-feed us every little detail about the worlds he builds or legitimize our many theories with lengthy explanations.  That would make the story and its mythology less interesting.  He definitely set up interesting ideas: the series’ 8th episode is pure enjoyable sensory overload that I–ashamedly–overanalyzed believing that it would eventually be explained.  But of course it wasn’t!  That wasn’t the point!  The point was to get a genuine emotional reaction out of me from the simple narrative being presented on the screen and, in that endeavor, the show succeeded.

Unlike other surreal stories such as LOST that promised everything would make sense in the end, TWIN PEAKS: THE RETURN promised us nothing more than the opportunity to see Cooper and the gang in wacky, frightening, and genuine scenarios one more time.  Currently, it seems Lynch has no plans to continue the series.  Maybe he’s said all he needs to say about TWIN PEAKS, television, and the world in general…and I’m perfectly fine with that.  Thanks for the great ride, Mr. Lynch.