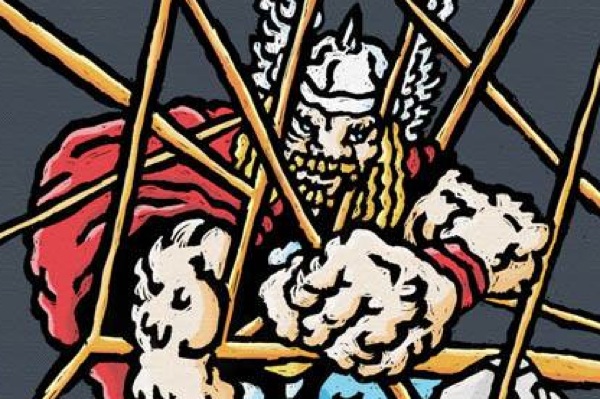 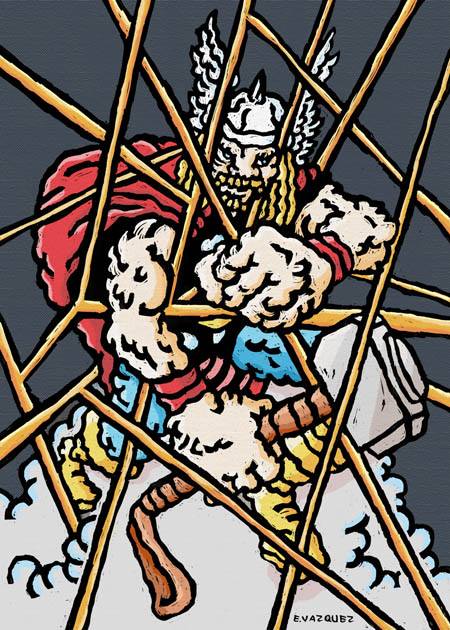 Marvel Studio’s steady march to THE AVENGERS sequel continues with THOR: THE DARK WORLD, the second film in the Norse god’s stand alone franchise.  While it has a different director and team of writers than THOR, fans have no need to worry as all the incumbents are industry veterans, particularly the writers who have extensive experience on other Marvel projects.  This time around Thor squares off against the Dark Elves, an ancient race born of darkness, led by the ruthless Malekith.  They seek to recover the Aether, a weapon of old that would allow them to cover the universe in darkness, which was taken from them by the Asgardians during an ancient battle.  As the nine worlds begin to align, the borders between them grow soft, drawing Jane Foster and her group of scientist into the center of the impending conflict between the Dark Elves and the Asgardians, pinning Thor between the woman he loves and his duty to Asgard.

THOR: THE DARK WORLD is an interesting fusion of classic Thor comics and the Marvel Studios movie universe.  We get to see more of the Nine worlds, particularly Vanaheim and Svartalfheim, and some classic villains, namely Malekith and Algrim.  At the same time we get a new mystical weapon with the Aether, and the dark elves ships are based far more on science fiction spacecrafts than the more mythological based modes of transportation in classic Thor comics.  All of this builds on the wonderful foundations of the first film, the scientific approach to Asgardian mysticism continues to be a prevalent theme, all the prominent Asgardians make appearances, and the consequences of THOR and THE AVENGERS are central to the films plot progression.  There’s more than enough content to satisfy both comic and film fans alike, as long as they are willing to approach THE DARK WORLD with an open mind.

Directing duties this time around fall to Alan Taylor (TV’s GAME OF THRONES) and while he is far more experienced with directing TV shows than movies, his broad experiences give him a diverse background to draw from, and it seems to play well in THE DARK WORLD.  The action sequences are well composed, fast paced enough to heighten the intensity, but not so fast that you lose track of what’s going on.  The moments of humor are a little distracting, as they are composed to feel like stand alone moments outside of the narrative, and while they do cause some chuckles, it takes away from the movie a bit. The most impressive directing is certainly the intricate camera work used to cover the out of control portals between the worlds.  The angles constantly change as the camera spins and scans, easily creating the effect of being out of control in an insane gravitational cascade.  Taylor’s wide variety of experience allows him handle THE DARK WORLD’s wide variety of scenes with ease, and while it may not be the most outstanding directing ever seen, its more than enough for a superhero blockbuster.

THOR: THE DARK WORLD boasts a sizeable cast, and while some of the actors may not have a great deal of screen time, it is the whole rather than the parts that makes the movie so fun.  Chris Hemsworth (THE AVENGERS) reprises his role as Thor for a third time. He is every bit as fun and vibrant as we’ve come to expect him to be, but with a new undercurrent of brooding, which Hemsworth portrays quite well, bringing some greater depth to the character.  Natalie Portman (BLACK SWAN) returns as Jane Foster, and she handles the role with confidence, easily portraying Jane’s preoccupation with Thor and the rollercoaster of emotions that ensue as worlds collided and things spin out of control.  Tom Hiddleston (THE AVENGERS) continues to be a scene-stealer as Loki, Thor’s villainous adopted brother.  Hiddleston effortlessly brings Loki’s arrogance, mischievousness, and sharp wit to life, giving us one of the world’s most memorable screen villains.  Odin is once again played by the wonderful Anthony Hopkins (HITCHCOCK) whose powerful demeanor and authoritative voice brings life to the head of the Norse pantheon.  Christopher Eccleston (G.I. JOE: THE RISE OF COBRA) plays Malekith, and brings a cold malice to the role that is just as impressive as his make up, because if it wasn’t for the credits I would have had no idea that was him under there. While I would love to continue giving more detailed coverage of everyone in the film, especially since some of them are actors I am very fond of, there are far too many of them and you would probably get bored before I was half way done, so I am simply going to do a quick run down so you know who’s who. Jaimie Alexander (THE LAST STAND) plays Sif, Zachary Levi (TV’s CHUCK) plays Fandral, Ray Stevenson (G.I. JOE: RETALIATION) plays Volstagg, Tadanobu Asano (47 RONIN) plays Hogun, Idris Elba (PACIFIC RIM) plays Heimdall, Rene Russo (THOR) plays Frigga, Adewale Akinnuoye-Agbaje (TV’s HUNTED) plays Algrim, Kat Dennings (TV’s TWO BROKE GIRLS) plays Darcy Lewis, and last but not least Stellan Skarsgard (THE AVENGERS) plays Erik Selvig. With such an amazing ensemble its almost impossible to not find someone you enjoy watching.

When it comes to sequels, sometimes they can be great fun and sometimes they can be absolute rubbish. However, every once in a while a sequel will outshine the original, and while I’m not quite certain that THOR: THE DARK WORLD accomplishes that monumental feat, it certainly comes damn close. It has nice production values, boasts an engaging story, and has a fantastic cast. If you are a fan of superhero movies, Marvel, Thor, comics, or just plain fun adventure movies, then you should head down to your local theatre and check out THOR: THE DARK WORLD on the big screen.