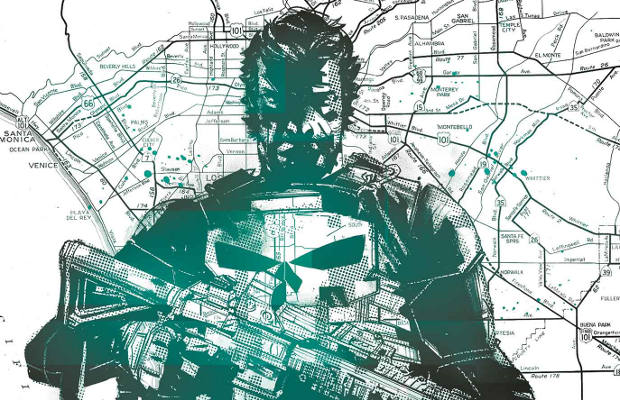 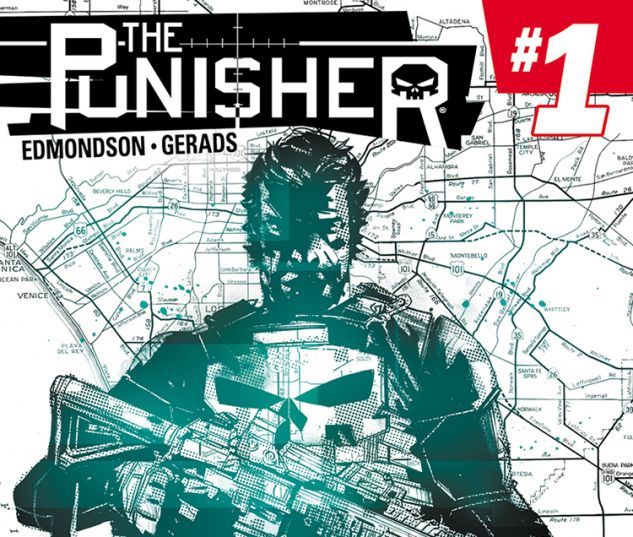 I’ve always liked The Punisher. He’s so simple yet can be made complicated if the right writer comes along. And to me, at the very least, he’s just a dude out for revenge who has a thirst for blood. Same reasons I like Rambo. I read a lot of Punisher when I was a kid, and I even collected his line of trading cards in the 90’s that had special edition scratch-and-sniff cards that smelled like gun powder. Anyone remember those!? So cool. Anyways, when I hear the THE PUNISHER #1 was on the list on ALL-NEW MARVEL NOW! books releaseing this year, I was pumped. I really wanted a good “jumping on” point for this character. It seems like forever since I’ve read one of his on-going books. I am happy to report that THE PUNISHER #1 by writer Nathan Edmondson and artist Mitch Gerads is just the medicine I am looking for. That means I liked it!

Things for Frank Castle start out simple enough here. He crosses paths with a bad guy who deals drugs in Mexico and wants to kill him and the men responsible for causing more pain in this world. His special way of convincing people to tell him what he wants to know leads The Punisher to Los Angeles, a nice location for the guy to play in considering he’s mostly romping around New York. Purists may scoff, but I’m down. Edmondson wastes no time in this book and I was saying “Wow, The Punisher is a bad ass” in no time. ANd really, that’s all I want out of a Punisher book. In this issue alone, I think I thought The Punisher was bad ass at least 3 times from the time he says “Don’t touch my gun.” all the way to the exciting final pages. Frank is a seasoned fighter and has a lot of useful connections to get the weaponry he needs. He is locked and loaded in this book and it seems like the writer has a lot of fun avenues to go down with this title. I’m in!

The art by Gerads fits the writing and the story like a glove. While it’s not winning any awards for being groundbreaking or wildly different, its got a classic feeling to it fitting for this story. Frank looks good, his weapons feel heavy, and the bullets rip whilst the explosions explode. The necessary moments of brutality are drawn nicely and are most effective. Again, the art style here has a classic feeling to it that fits just right.

As I turned the last page here in THE PUNISHER #1 a smirk ran across my face because I just then realized that I have a brand new on-going Punisher book to look forward to now! And that makes this revenge-loving nerd very happy. It’s obvious that the writer and artist are Punisher fans because the simple yet entertaining story hit all the right beats and really just focused on what Punisher fans love…a bad ass wise guy with a lot of weapons and a thirst for revenge. The art compliments the story well and the overall tone and change of scenery is a nice little cherry on top. So yeah, if you are sitting on the fence here, head on over to your local comic shop and give THE PUNISHER #1 a go.

In the San Francisco area looking for your next THE PUNISHER comic book fix? If so, Check out MISSION: COMICS & ART. They’ve got you covered!