In Defense Of: GHOSTBUSTERS 2 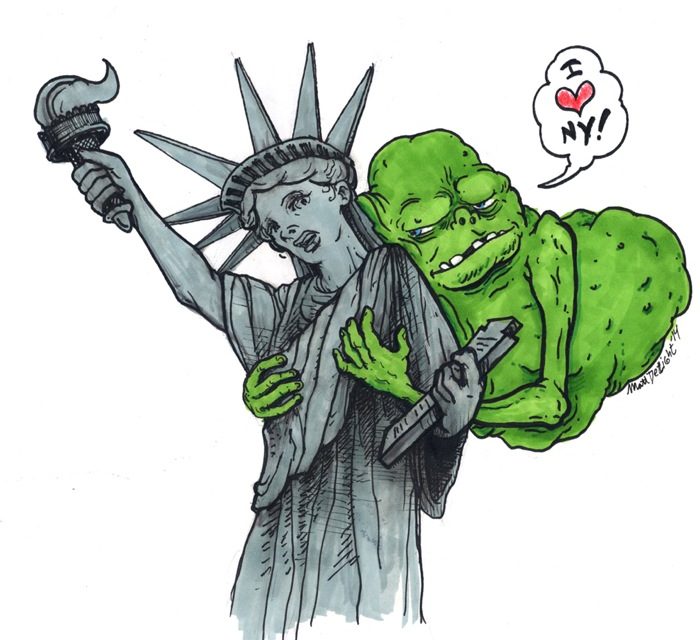 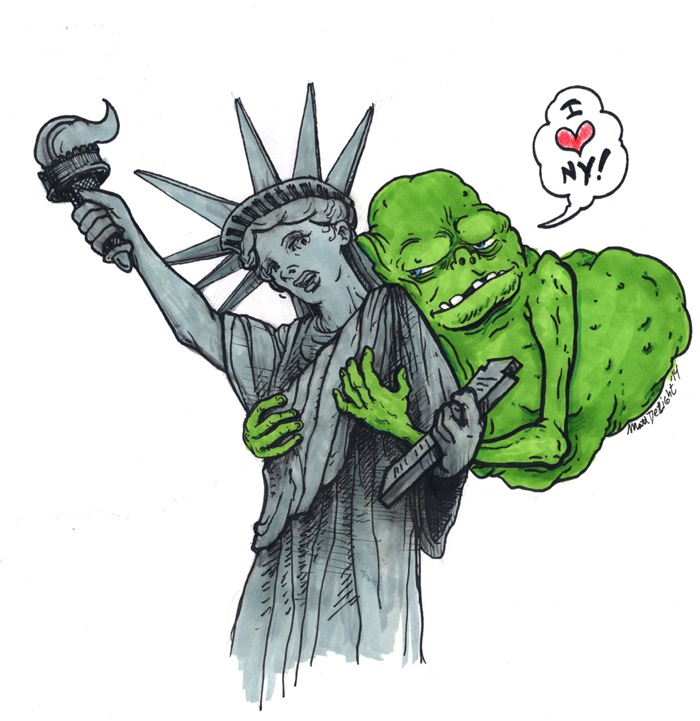 I was 5 years old when I first saw GHOSTBUSTERS. I remember that it was on a VHS that included Michael Jackson’s THRILLER and some random television commercials that my dad had found particularly enjoyable.  I know this only because I was terrified as all hell of that damn THRILLER video and the image of the jelly coming out of that sewer zombie’s mouth has been forever burned into my brain. I took special care to avoid that particular VHS at all cost. To this day, I can’t tell you if my dad recorded GHOSTBUSTERS (my favorite movie) on that tape because he hoped it would help me face my fears or because he was running some type of psychological experiment on me?  Either way, I’m a grown man who is terrified of zombies and quotes GHOSTBUSTERS on a daily basis.

It wasn’t until I was much older and working in a comic book shop in New Jersey, that I discovered how truly amazing the original GHOSTBUSTERS was.  And to a certain extent, how great the sequel was. When you’re a child, you appreciate movies on such a superficial level.  I was tickled by the beyond obvious jokes and the fact that the original movie ended with a giant marshmallow man.I thought that Egon was a buzzkill, Venkman was a charming grifter, Ray was a doofus and Winston was the out of his element cool guy. My brain couldn’t comprehend anything beyond the fact that ghosts were taking over the city and a small group of knuckleheads were the only ones who could stop it. Twice. It wasn’t until much later in life that I realized what a brilliant masterpiece the original film was and how completely wrong I was about who each character truly was. I never realized how many jokes I was missing in the background or how much deeper each, seemingly obvious, joke was. There are so many different things occurring in each scene that I’m confident you could watch it right now and notice something you’ve never noticed before. My favorite being Egon subtly suggesting prices to Venkman after they catch their first ghost at the hotel. GHOSTBUSTERS took such an absurd premise and handled it with the utmost precision and care. The movie is the product of some of most influential masters of comedy, coming together to make a movie that would define a generation. So.. my question is.. Where exactly do you go with a sequel?

As most movies in the 80s, the original GHOSTBUSTERS ended with them as a heroes. They saved the city. Shit, they saved the world. ‘It’s Miller time!’ In an era of film where it was common place for the heroes to win and live happily ever after, starting GHOSTBUSTERS 2, 5 years later, with everyone at rock bottom was such an inspired decision. The Ghostbusters saved the city and got stuck with the bill.  For a series of movies that deals with men capturing and containing ghost, it sure does stick hard and fast to the harsh reality of our world. Of course the Ghostbusters would get blamed for everything.  You think the world is ready to handle the fact that an ancient Mesopotamian God crossed into our dimension and attempted to level New York City in one of the pre-chosen forms of a giant Stay Puft Marsh Mellow man? Nope. As far as everyone is concerned, shit was happening, the Ghostbusters showed up and then everything went back to normal. Egon and Ray fell back into scientific obscurity.   Who knows that the hell Winston was doing, besides attending the occasional birthday party with Ray. Venkman is hosting a local access television show and has even less credibility than he did at the beginning of the first movies.  These men are heroes. They were willingly going to sacrifice themselves for the city because they were the only ones who could do anything about it. ‘Who ya gonna call,’ indeed.

I never really understood why people shit all over the sequel. Okay, I guess I understand why. How do you make a sequel to one of the most influential films in cinematic history?  Do you even need to make a sequel? Yes, it can be argued that this movie doesn’t stray too far from the original, but, why would it? The characters are so clearly established in the original film that you couldn’t have Venkman running for mayor of New York City in the sequel.  Of course he and Dana didn’t get married.  Venkman has the heart of a hero, wrapped in the body of game show host. Their relationship was forged in the fire of supernatural madness. Ray and Egon are two fringe scientist that lack the bravado of Venkman and willingly resign themselves back into obscurity. They are regular men who continually find themselves in extraordinary situations. Then, it makes complete sense that the events of the sequel would mirror the original. The world they live in doesn’t change, so, when Vigo attempts to drown the city in a river of slime, it would be business as usual.

Maybe I’m crazy, but, I feel like I find that people quote GHOSTBUSTERS 2 more than they quote the original?  Perhaps my generation was a little too young to really process and appreciate the first film? So, when the sequel came around, we were able to grasp onto it like how our parents had claimed the original. GHOSTBUSTERS 2 came out when I was 9 years old, so, naturally I have more of a connection to it than I do with the original. Please. PLEASE don’t tell me that this movie isn’t as funny as the original.  Yes, the original film definitely raised the bar to an impossible to reach comedic level.. But, let me present to you these lines:

I spent an hour last night in my bedroom talking to Fiorello LaGuardia and he’s been dead for forty years.
He is Vigo! You are like the buzzing of flies to him!
We had part of a Slinky. But I straightened it.
So your alien had a room at the Holiday Inn, Paramus?
I think they’re more interested in my epididymis.
It really makes you wonder, whether she’s naked under that toga. She *is* French. You know that.
The upper vest side.
Yeah, I know Bass Masters..
I’d like to run some gynecological tests on the mother. Who wouldn’t?

That is some of the funniest shit I have ever heard in a movie and those are only the lines I could think of.

Okay, lets talk about some of the problems that people have with this movie. Perhaps you think the Statue of Liberty walking down a New York City street is ridiculous?  And a giant marshmallow sailor isn’t? How can you not smile when the city rallies behind a giant walking statue, to the sweet beats of Jackie Wilson? Maybe you think it’s odd that Dana found herself in the middle of two major supernatural events that occurred in New York City?  Well, she was once possessed by Zuul, a demigod and minion of Gozer. Doesn’t it make sense that that would make her more of a candidate to be the mother of a god than anyone else in the city? Who’s to say that her time as Zuul didn’t have some sort of lasting effect on Oscar? Yes, of course the slime would flow underneath New York City.  Where else in the world will you find such a large collection of emotional volatile people?  I find it odd that I even have to defend this movie because you all know if you discovered that this movie was on.. you know you would drop what you were doing and watch it. Tell me I’m wrong?

Siskel and Ebert called this movie a ‘demonstration of the bankruptcy of the sequels.’ (I highly doubt they would say that if they saw the trash that passes for sequels nowadays). The original GHOSTBUSTERS gave the world a brilliant comedy, tucked inside an outrageous science fiction/horror movie. At the time, this idea was completely unique and drastically changed the way studios handled genre pieces. How could a sequel ever live up to that? I’m not trying to say that the sequel is even in the same league as the original.  It’s not.  But, it’s definitely better than people make it out to be.  It’s not a disappointment.  It doesn’t even come close to ‘ruining the legacy of the original.’ If anything, it gave us something that we had never seen before.  It gave us the next day.  What happens after you save the city?  What happens after you rescue the princess? When you create a list of movies that drastically changed the face of cinema, GHOSTBUSTERS 2 will be no where near that list.  But, if you made a list of movies that drastically influenced your adolescent and taught you how to appreciate clever deliveries and the subtly of a well executed scene, GHOSTBUSTERS 2 would definitely be included.

On a sad note:
I’ve been working on this piece, on and off, for a couple of weeks.  It was upon hearing that Harold Ramis had past away that I felt that I should finish this.  I once had to toast to Harold Ramis for an entire year, because I didn’t believe he was one of the writers of BACK TO SCHOOL.  With such films as GROUNDHOGS DAY, CADDYSHACK and ANIMAL HOUSE, Harold Ramis was influential in some of the most important comedies of our generation.  If it wasn’t for his brilliance, I doubt I would even be writing for this NERD website.  Thank you for your contributions to my imagination and I hope that you’ve finally achieved ‘total enlightenment.’  Which would be nice.