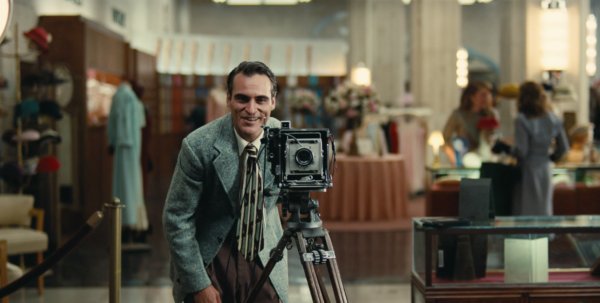 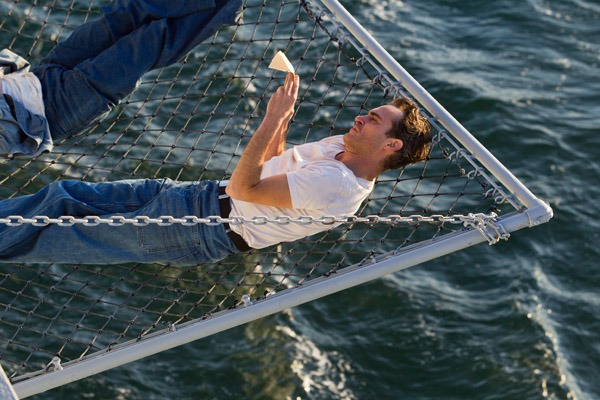 Writer/Director Paul Thomas Anderson (THERE WILL BE BLOOD) is incredibly skilled at making smart, engrossing, character driven movies; so it comes as no surprise that THE MASTER not only lives up to those expectations, but thoroughly exceeds them. Joaquin Phoenix (WALK THE LINE) stars as Freddie Quell, a World War II veteran who is suffering from PTSD, alcoholism, and some degree of mental illness. During one of his alcoholic benders Quell stows away on a ship and when he surfaces to the land of sobriety he is befriended by Lancaster Dodd (Philip Seymour Hoffman (CAPOTE)): a charismatic author/scientist/spiritual leader who many simply call Master. Dodd takes Quell under his wing and tries to integrate him into his life and spiritual organization, The Cause, but Quell’s personal issues and erratic behavior often clash with Dodd’s agenda. This rocky relationship rules the movie as the two men try to come to grips with each other.

The acting is certainly the crown jewel of THE MASTER. I have long been a fan of both Joaquin Phoenix and Philip Seymour Hoffman and in this film they certainly remind us why they are part of the upper echelone of great actors who are working today. Phoenix embodies Freddie Quell so fantastically that I found it difficult to fathom that that wasn’t who he really is. I have seen many movies featuring mentally ill characters (I have a strange fandom for the more demented side of life), but I have never seen it played so well or realistically. Some of the scenes were eerily reminiscent of encounters I have had with the less than stable people in my life, and, subsequently, they drew me in more emotionally than a movie has in a long time. While Dodd is a more reserved character than Quell, Hoffman’s performance is no less note worthy. Dodd’s character is so broad that only a well seasoned actor could hope to tackle it, and Hoffman seems to do it with ease. He seamlessly transitions between charismatic leader, frustrated creator, loyal friend, hounded ideologist, and a kind yet exacerbated teacher; and while these are certainly facets that a person may have, it is rare to see them so well portrayed in a single character. Hoffman’s portrayal of the few scenes of Dodd’s extreme frustration are so powerfully well done that you can taste the tension on the screen, and it is deliciously uncomfortable. Beyond the two principles, the supporting cast do a wonderful job as well, and one that must be mentioned is Amy Adams (THE FIGHTER) who plays Dodd’s wife Peggy. Peggy is clearly the anchor of Lancaster’s dreams, keeping him focused while being a pillar of support. Adams skillfully plays the dualistic character, she is perfect as the seemingly reserved and respectful wife when in the public eye, and impressively powerful and undeniable when in private. While the acting is what shined brightest in the movie, the rest of the film is still quite striking. 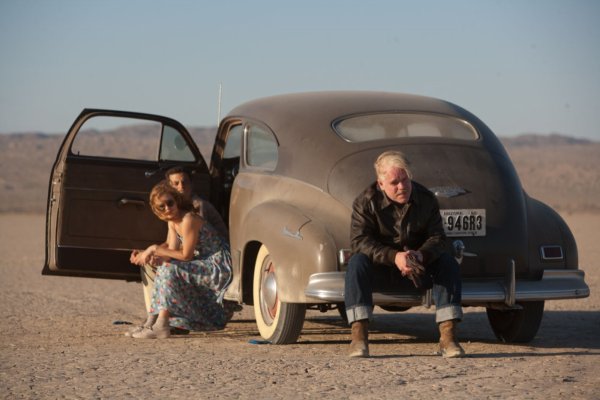 While I really didn’t become a fan of Paul Thomas Anderson until PUNCH DRUNK LOVE, I’ve always thought he was a talented director, and that holds true in THE MASTER. Anderson is keenly aware of the environments he is shooting in and continually finds interesting and creative ways to shape the scenes. I was very impressed by how, many times, he effectively related Quell’s instability and isolation through the shots without really having to have him interact with other characters in any significant way. Beyond that, the occasional use of striking visual contrasts and tight close ups really brought intensity to the right moments in the film, while a subtle, minimalist approached was used to convey how withdrawn and aloof Dodd could sometimes be. This skillful directing was just as effective as the characters at keeping me engrossed in the story and it really helped make the experience much more real.

What also really impressed me about THE MASTER was how well crafted the story was. While the film was firmly centered on Quell and his relationship with Lancaster Dodd, there was also the very prevalent back drop of Dodd’s organization The Cause. Anderson did a wonderful job of letting the audience experience The Cause through the characters rather then blatantly explaining it; we get point of view glimpses from detractors, the loyalists, the realists, the disenfranchised, and the proprietors. All those perspectives help to paint the picture of The Cause, and while the overall impression did seem negative and absurd, it never felt like the movie was preaching this to you or bashing you over the head with it. An equally excellent job is done with Quell’s back story. We are allowed to see brief windows in Quell’s timeline: his last days in the Navy, his treatment for PTSD, his attempts at maintaining steady work, and a couple instances of courtship. Through all this the audience gets a clearer picture of Quell and his skewed mental state, but just like The Cause, it is never overly spelled out for you. These story telling tactics really allowed me to enter the movie and experience the story on my own terms while still clearly portraying the authors vision, and I was absolutely delighted by it. 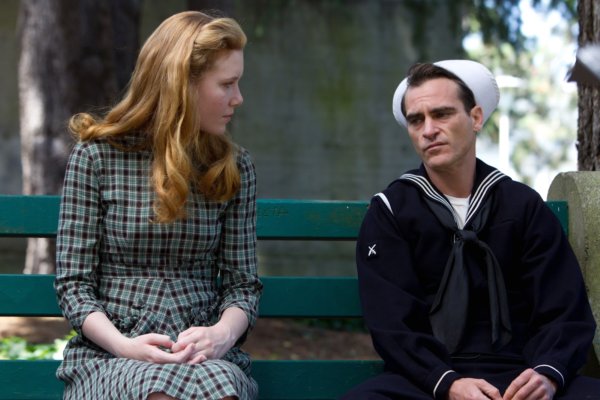 If you have any interest in this movie you would be doing yourself a disservice by not checking it out in theaters. The performances are amazing, the directing is stunning, and if the story doesn’t suck you in then you might not be human. This is definitely one of the best movies I have seen this year and as award season is about to kick off I am very interested to see what other movies will have to offer, because it will take some very outstanding performances to out do Phoenix, Hoffman, and Adams. THE MASTER is a powerful piece of cinema, whose look, feel, and characters will stay with you long after the credits finish rolling.