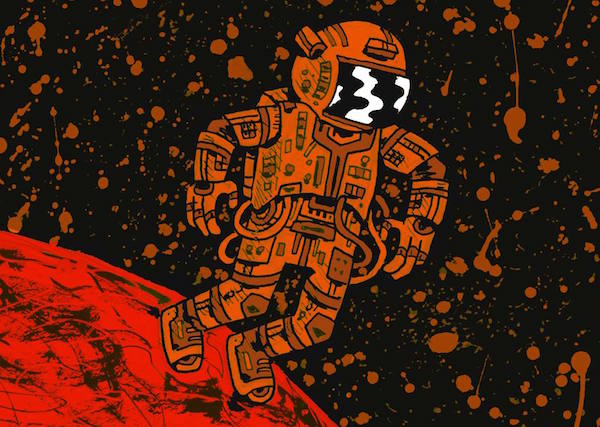 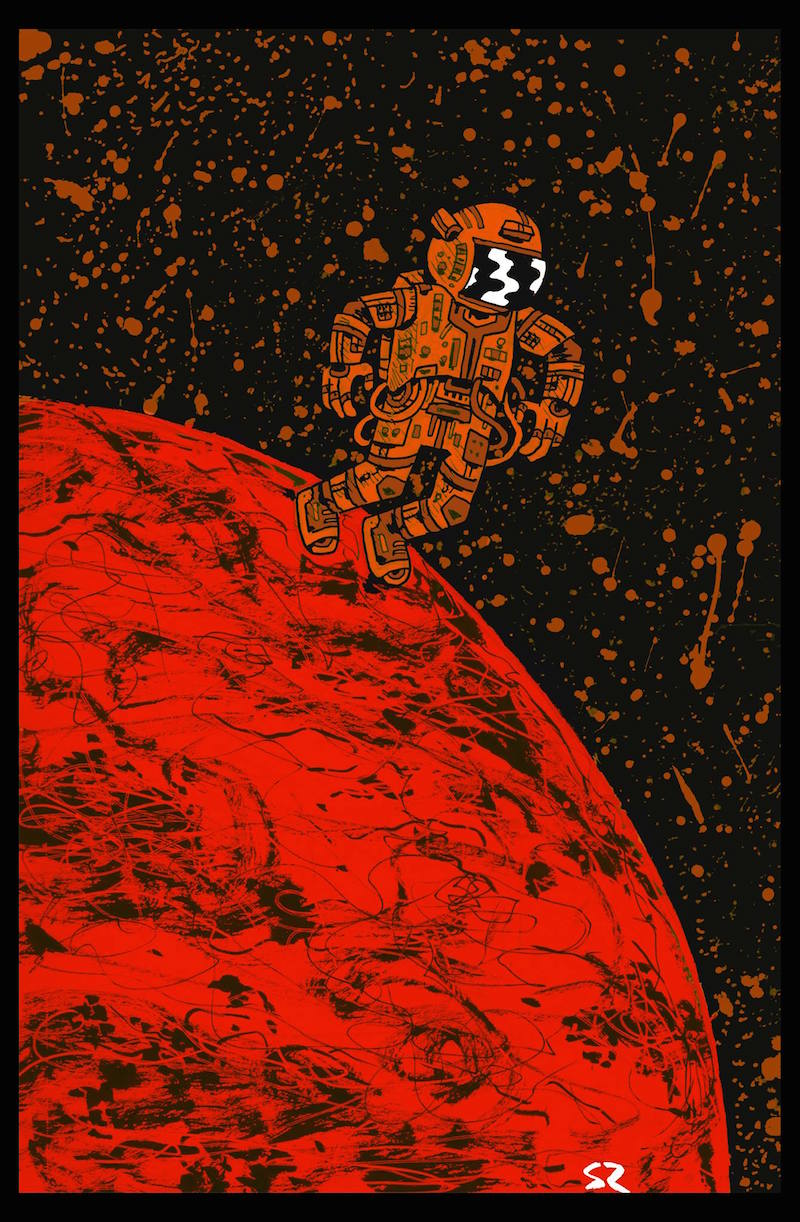 Given that Ridley Scott (EXODUS: GODS AND KINGS) has had a career that spans five decades, it is not surprising that occasionally his reach might exceed his grasp.  Thankfully, that is not the case with his latest offering, THE MARTIAN, an impressive science fiction drama that attempts to anchor itself not in the fantastical, but in what soon might be scientific reality.  Mark Watney is part of a manned mission to mars, and the film opens with him and the other members of the Aries III taking samples on the planet’s surface.  An unexpected storm forces the team to evacuate, but the communications array comes apart and blindsides Mark, puncturing his suit and destroying his vitals monitoring interface.  The team leader, Melissa Lewis, tries to find him, but the storm is too bad and she is forced to leave with the others before the winds become too forceful and knock over their shuttle.  Mark awakens the next day to find himself impaled and his suit integrity being maintained by the debris and his own blood, and quickly realizes that he is now stranded without a means to communicate to NASA or his shipmates.  NASA gets the shock of a lifetime a couple weeks later when satellite images reveal that Mark is alive.  Now Mark must find a way to survive with limited food and resources while NASA scrambles to find a way to bring him home or resupply him to prevent tragedy from striking a second time.

What I really loved about The Martian was how realistic everything looked.  The various space suits, the ships, the equipment, and the Mars environment all looked amazingly real, grounding the film in a sense of realism that is often missing from science fiction films.  The cinematography was also quite impressive.  Any film involving space travel and exploration is going to contain a heavy amount of wide, sweeping shots to emphasize the expanse of the areas being dealt with, and while these are common in the film, it is tempered by a healthy amount of tight, close shots that really draw you into Mark’s story and help you connect with him.  The combination of these two effects create a great sense of both isolation and empathy, allowing us to feel like we are in this predicament with Mark and are sharing in his triumphs and failures as opposed to merely being outside observers.

The screenplay for THE MARTIAN was adapted by Drew Goddard (Netfilix’s DAREDEVIL) and is based on the book by Andy Weir.  Portraying a story that revolves around an isolated character is always a bit difficult, but Goddard does an excellent job of breaking up Mark’s isolation by covering what NASA is doing back on Earth to try and help him, as well as depicting much of his story through his video journals which allows for some story short cuts while adding a bit of humor to what is a very serious situation.  Speaking of humor, I love how Mark keeps his sanity by making light of his situation and abilities, it’s an engaging coping mechanism and a genius writing device for a narrative like this.  Another highlight of the writing is how every person feels like an individual even though they may not have a great deal of personal development; this is established through mannerisms, brief glimpses of personal life, and sharply written banter that all combines to give the characters a noticeable depth, even though those depth may not be explored.

While The Martian boasts nice writing and directing, what really elevates the movie to a higher level are the outstanding performances.  Matt Damon (INTERSTELLAR) is perfect as Mark Watney, mainly because they have very similar personalities.  Damon has always had a penchant for banter and levity, and this is shared with Mark, who uses wit and humor to keep his sanity.  However, Damon takes the role far deeper, delivering us a stark portrayal of a man who constantly finds himself at the end of his rope and yet endures despite the awful odds and circumstances.  By the end of the film, I found myself wishing it could go on because I wanted to see what this resilient man was going to do next, and that is high praise for any performance.  Stepping into the role of Melissa Lewis, the Aries III commander, is Jessica Chastain (ZERO DARK THIRTY) and she delivers an impressive performance.  Lewis takes all the responsibility for leaving Mark behind and Chastain does a great job of portraying that burden.  She constantly looks like she is haunted yet determined, as if she is carrying a great weight but refuses to stop moving forward, and that subtlety and strength creates a character that one completely believes should be in charge of a manned mission to Mars.  Mission director Vincent Kapoor is portrayed by Chiwetel Ejiofor (12 YEARS A SLAVE) and he is a scene stealer.  Kapoor is the principal man trying to bring Mark home and as such is often at odds with others, scrambling, and attempting to solve the simplistic yet complex problem of keeping Mark alive.  Ejiofor brings a controlled passion to the role that radiates off the screen, he’s not the loudest man in the room, but he demands your attention and it is impossible not to give it to him.  Taking on the role of Nasa head Teddy Sanders is Jeff Daniels (LOOPER) and he delivers a powerful, yet somewhat unexpected, performance.  Daniels is perfect as the greater good concerned Head of Nasa, he is cold and detached as he gives orders and makes the hard calls, doing what is most likely to succeed and focusing on what is most possible while trying to minimize any potential damage to Nasa’s image.  This is far colder and down to earth than anything I’ve ever seen from Daniels, and I was pleasantly surprised by the departure.  While the cast is far too extensive to give every actor the space they deserve, I want to mention Michael Peña (FURY), Sean Bean (JUPITER ASCENDING), Kristen Wiig (HOW TO TRAIN YOUR DRAGON 2), Kate Mara (Netflix’s HOUSE OF CARDS), and Donald Glover (TV’s COMMUNITY) as all of them deliver solid performances.

THE MARTIAN is one of the best science fiction films to come out in years.  It boasts great directing, engaging storytelling, and all around great performances.  This movie will suck you in and won’t let you go, so if you’re in the mood for a great space based movie, a fan of anyone involved in this film, or you just think it looks cool, then head on out to your local theater and give it a watch, you won’t regret it.