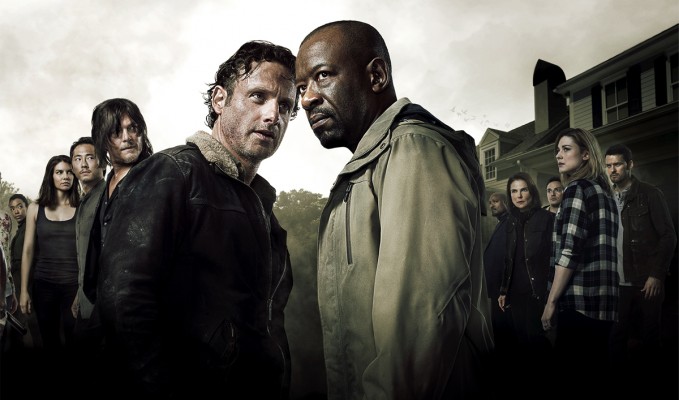 Zombie Hordes! Trucks! Glasses!  That dude from EMPIRE RECORDS!  WHAT IN THE HERSHEL IS GOING ON?

THE WALKING DEAD is back for it’s 6th season and I’m already super confused about what the hell is happening and how I feel about it. How long ago was the season 5 finale?  (Check out my season 5 recap here!) Did I miss an episode?  Is the color in my TV broken? As soon as the episode started, I felt like I was hanging out with that intense friend you know from college that ‘balance beams’ between extreme emotional instability and super insightful ponderings on the duality of humanity.  You meet them for a couple of drinks and they immediately start doing shots and explaining how they are on probation for burning down their stepmother’s garage.  ‘Oh, shit, I forgot how mentally draining hanging out with this person can be.’ Sure enough, they end up romancing you back with some pretty decent CGI zombie hordes, an ‘edge of your seat’ story line, and some promising character growth. Right?

Was I the only one who had a hard time keeping track of everything going on in the season 6 premiere?  Were these people always here?  Who are they?  Who are they talking about? I think my brain deleted every character’s name from my memory banks. Everyone kept talking about ‘this guy’ and ‘that girl’ and I could not muster any of their faces.  It’s not like season 5 felt too overly complicated while I was watching it… I just didn’t realize how much I was identifying people by their actions and not so much by their names. ‘Drunk abusive husband.’ ‘Guy who shit his pants and abandoned Glenn and Noah to die.’  ‘The son of the wife who’s husband killed that other woman’s husband with a samurai sword.’ I also had a hard time remembering when specific things happened.  Did Beth die last season? When did the Governor attack the prison? Was Alexandria the entire last season or just the last part? Oh yeah, It was last season when Rick went ape shit and started waving a gun around in the middle of Alexandria. Tara was in a coma. Morgan showed up right as Rick executed that dude.  Carl was hanging out with a girl who seemed to have ulterior motives. ‘Red head flat top’ is still grumpy from ‘mullet man’ lying about their mission.  Sasha became wreckless in her grief over losing Tyreese and Bob. Carol was pretending to be a ‘simple housewife.’ Preacher man went full on traitor and then left the gate open. Wow, I really should have watched last season before I watched the premiere.  Would that have even helped?

The premiere seemed to understand that a lot of fans were going to have trouble remembering the way things left off last season, so, the show bounced back and forth between the present and the day that season 5 ended.  Which, I guess was a couple of weeks ago?  Also, for some reason, they decided to do all the flashbacks in black and white.  Was this an established concept for the show?  I mean, I dug it… It just seemed a little bit out of place. In the WALKING DEAD land, there still seems to be some kick back between the life the Alexandrians knew and the reality that Rick is heavy handededly thrusting upon all of them. (There also seems to be some reluctance in #teamrick) Luckily, Rick and Morgan stumble across a valley full of thousands of walkers. Realizing that they have to deal with this situation sooner rather than later, Rick offers up a plan that will both protect their future and ‘trial by fire’ all the sheltered Alexandrians.  The plan actually works for a while until it suddenly doesn’t.  There’s excitement.  There’s unexpected deaths. There’s forward momentum. Starting the season off with an intense story line is sort of new deal for the WALKING DEAD world.  Rick seems to be finally picking a side between ‘overwhelmingly emotional flip floppy’ and ‘mad with a purpose.’ Sadly, this realization may be coming too late because I definitely feel some descent among the ranks. Either way, I was hesitant that I could handle another season of this chaos and (as usual) ended the episode hungry for more.  FINE.