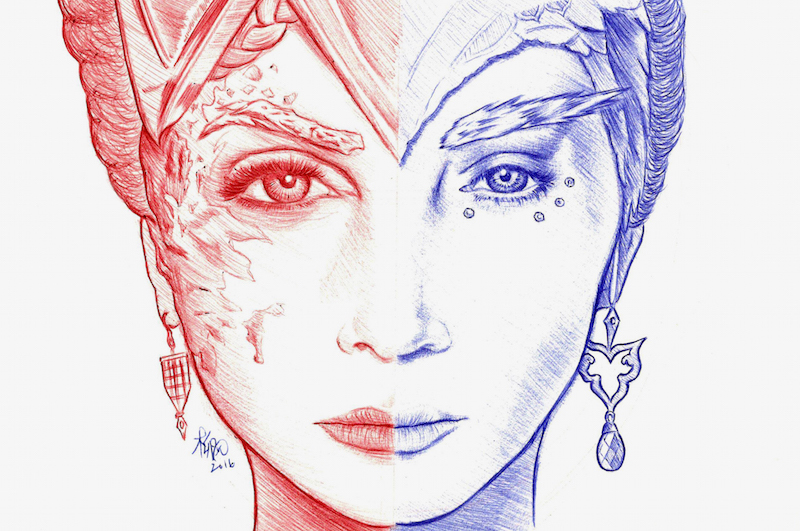 It would appear that any successful movie must become a franchise these days, and so we now have THE HUNTSMAN: WINTERS WAR, the follow up to the moderately successful SNOW WHITE AND THE HUNTSMAN.  The movie focuses on the story of Eric the Huntsman, who was taken as a child by the evil ice sorceress and sister to Revenna, Queen Freya, and raised to be a warrior.  After years of loyal service he disobeys the queen’s principal law, that love is forbidden and outlawed, when he becomes enamoured with Sara, a warrior woman who is just as formidable as he is.  They’re discovered and in their attempts to escape Sara is killed and Eric, heartbroken and beaten, is thrown into a river and left for dead.  The movie then jumps forward to after the events of the first film, in which Revenna was defeated by Snow White and Eric.  Turns out Revenna’s magic mirror isn’t quite dormant and is wreaking havoc on Snow White, so she sends it away to Sanctuary where it will be safe.  However, before it can reach its destination it is stolen by parties unknown.  Now The Huntsman must track it down and delivery it to sanctuary before Freya can lay claim to it and use its evil powers to spread her kingdom of ice across the world.

The visual production is by far the best aspect of The Huntsman, and this is most likely owed to the director, Cedric Nicolas-Troyan, who is new to being the primary director on a film but has had a lengthy career in visual effects.  The film has gorgeous visuals of enchanted landscapes, amazing creatures that for the most part look very real, and incredibly portrayed magic, in short, the movie looks exactly like what a modern fantasy film should look like.  I was particularly impressed with the goblins, as they have a unique character design that is different from so many other modern portrayals, making them something new and fun.  Also, the costumes were amazing, lots of leather, furs, and armor, giving the characters the right fantastical look for a fairy tale spin off.  Another highlight was the ice effects.  Freya can control ice and cold, and I liked the stylized magic effects and ice structures in and around her castle.  They don’t look like real ice, but they give the proper imagery of cold and frost, adding to the atmosphere of enchantment that saturates the movie.

While THE HUNTSMAN: WINTERS WAR looks amazing, the story is, unfortunately, painfully predictable.   Writing duties fell to Evan Spiliotopoulos (HERCULES), who has spent most of his career writing straight to video Disney releases, and Craig Mazin (THE HANGOVER PART 3) who is a well known comedy writer.  While these two men have years of experience behind them, they may not have been the best choices to helm an adventure fantasy film.  The movie does start with a decent premise: Freya, heartbroken and betrayed, sets out to set up a kingdom where her injuries can never be repeated.  Of course, boy meets girl and a secret love develops that forces Freya to punish them, resulting in Eric setting off on the path that we see in the first film and Sara dead.  This isn’t a bad opening, but everything that follows is painful.  The movie brings in twists and turns on a regular basis, but all of them are predictable and overused movie devices. Saved by a ghost from your past?  Check.  Betrayed by a loved one?  Check.  Finding out that the person you trusted most is responsible for all the pain in your life,  Check.  Quirky, bickering couple ends up together? Check.  This lack of originality and predictability was so ubiquitous throughout the film that I got to the point where I mostly zoned out of the story and focused on the beautiful imagery.   To the writer’s credit, they clearly tried to write a good movie, but they followed the rules too closely and ended up delivering a movie that completely fails to captivate the audience.

For the most part, the performances in The Huntsman were perfectly acceptable for a fantasy adventure film. Reprising the role of Eric The Huntsman was Chris Hemsworth (IN THE HEART OF THE SEA) and he does a decent job with the part.  Hemsworth has a great deal of experience playing the handsome hero throughout his career, and he handles this role with a relaxed ease, giving us a performance that is fun, but ultimately forgettable.  Stepping into the role of Sara is Jessica Chastain (THE MARTIAN) and she delivers a solid performance.  Sara has to deal with some conflicting emotions throughout the movie, and Chastain embodies them perfectly as they arise, giving us a performance that is far more engaging than the story she is in.  Emily Blunt (EDGE OF TOMORROW) takes on the role of Freya, and while the ice queen role doesn’t allow for a great deal of range, Blunt does deliver her uncaring, cold malice with a skilled air.  I’d be very curious to see what she could do as a villain in a more mature film, as I think she could be truly terrifying with the right material.  Returning to the part of Revenna is Charlize Theron (MAD MAX: FURY ROAD) and she is delightful as the self obsessed sorceress.  Theron does unimpassioned evil so well that she easily steals every scene she is in and adds a much needed engaging edge to the latter part of the film.  Lastly, Nick Frost (THE BOXTROLLS) returns as Nion, one of the dwarves from the previous film.  Nion serves as comic relief and this is the stuff Frost is perfect for, giving us the fun, sticks his foot in his mouth buddy that always helps to keep the air of this kind of film light and fun.

THE HUNTSMAN: WINTERS WAR isn’t the worst fantasy feature, it just suffers from a less than thrilling plot, the beautiful visual effects and decent acting are a welcome distraction, but they aren’t enough to save this film.  Unless you really liked the first one or are a diehard fan of one of the actors, I would sit this one out and wait for it to come to your streaming service of choice.