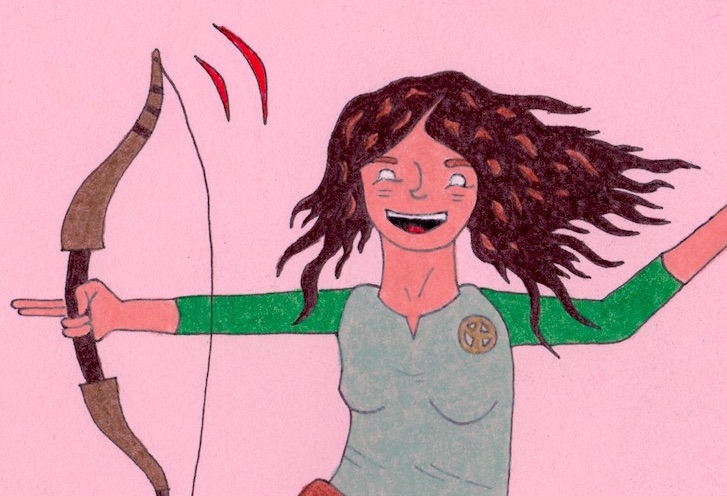 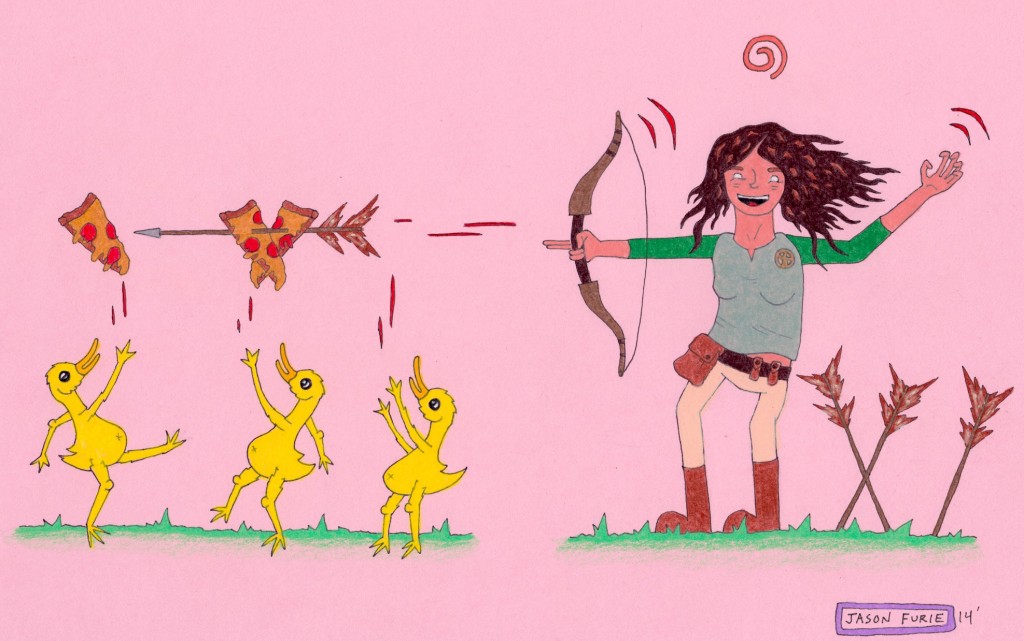 The latest installment of THE HUNGER GAMES has hit theatres and, as has become a trend in Hollywood, it is the first of two films to cover the final book of a literary trilogy. The movie picks up where the last one left off, with Katniss recovering from her ordeal in the arena in District 13. In short order, Katniss is brought in front of Alma Coin, leader of District 13, who wants her to be the face of the revolution for their propaganda machine against the Capital. However, while Katniss is still trying to make up her mind about whether or not to play along, Peeta pops up on the Capital’s news network and is clearly being used by them in the same way District 13 wants to use Katniss. In order to secure a pardon for Peeta and her other captive friends, she agrees to Coin’s request, but this decision puts her back in battle as she can only lead and inspire from the field. As the rebellion grows, so do the Capital’s counter measures, and Katniss finds herself trapped between the capital’s attempts to destroy her and Coin’s attempts to use her.

The production values are considerably less flashy this time around as the Capital is no longer one of the main settings of the film, but that’s not to say they are any less impressive. While Director Francis Lawrence (I AM LEGEND) does a wonderful job of portraying the war torn wreck that Panem has become since the rebellion started in earnest, with rubble and ruin being the order of the day and the settings look like something right out of a war documentary, the real beauty of THE HUNGER GAMES: MOCKING JAY PART ONE lies in what isn’t being overtly shown. The stripped down, no nonsense, strictly functional look and attitude of District 13 is used as a sharp contrast to the Capital and, if one has eyes to see below the surface, it represents a system and attitude just as broken as the Capital’s luxury and indulgence. Without a doubt, the conflict between these two behemoths makes for some great entertainment, but what allows this movie to rise above the typical blockbuster fare is that it is, in fact, indicting the very idea of extreme ideologies and blind loyalty or hatred, encouraging the audience to look at the people on both sides and see what they gain, lose, and ultimately suffer by the implantation of said ideologies. Lawrence never fails to quietly let us peak behind the curtain of various characters while still mainly focusing on Katniss, giving the film a playful feeling while begging us to look deeper and open our eyes to what is truly going on in the broken world of Panem.

While the general plot of the movie was entertaining, the lack of back story about District 13 often made the motives behind what was going on a bit confusing and it significantly detracted from the film. While I’ve read the books, I still found it maddening that the protagonist is suddenly in a place that was supposed to have been destroyed 75 years prior and yet there is no explanation as to how they survived, what they’ve been doing, or what the motives behind their current actions are. I understand that this is Katniss’ story and not that of District 13, but the utter lack of explanation was so distracting that it pulled me out of the story and left me wondering why I should care. This omission was a massive faux pas on the part of the writers and I hope that this is rectified in either the digital release or the next film, because this mistake really diminishes what is otherwise an outstanding film.

THE HUNGER GAMES: MOCKINGJAY PART ONE boasts an extensive cast of talented actors, and their performances were certainly one of the highlights of the film. This being the second time she has reprised her role of Katniss, Jennifer Lawrence (AMERICAN HUSTLE) effortlessly delivers a fun and passionate performance. Lawrence does a great job of portraying Katniss’ anger, fear, and mistrust while still allowing the audience to see the simple girl underneath the fire, and while a few lines fall a little flat, that has more to do with the script than her performance. Liam Hemsworth (PARANOIA) steps back into the role of Gale, and he has a far larger screen presence this time around. Hemsworth does a nice job with Gale, easily bringing his hurt and anger to life, but the character is a little too one dimensional for me and I would like to see him tackle something a bit more challenging. Woody Harrelson (TV’s TRUE DETECTIVE) is one of those actors who never disappoints me, and this tradition continues with his continuing portrayal of Haymitch. This time around Haymitch is forced to be sober for the first time in years, and Harrelson does a wonderful job of bringing this haunted man who can no longer drown his demons to life, giving us a character that cares, but is grating and exacerbating as well. There are few actors alive today who can deliver a performance that is understated, subtle, and commanding, fortunately, Donald Sutherland (THE CALLING) is a master at doing just that and he is a delight as the calm and cruel President Snow. Sutherland portrays a perfect leader, because he is cold, calculating, and never lets his emotions get the better of him. To say he is a scene stealer is an understatement, he owns the screen every time he appears. Philip Seymour Hoffman (A MOST WANTED MAN) is his usual brilliant self as Plutarch Heavensbee. The only down side to the performance is that there wasn’t enough of it, and I think this is due to his untimely death in the middle of filming, however, like every great actor, he has certainly left us wanting more which I feel is a fitting legacy for such a great performer. Joining the cast for the first time is Julianne Moore (DON JON) who takes on the role of Alma Coin. Moore is wonderful as the guarded leader, easily portraying a woman who wants to be approachable, but who clearly would rather everyone just do what they’re told and not interfere with their superiors. I look forward to seeing her dig deeper into the role in the next installment. Another new addition is Natalie Dormer (TV’s GAME OF THRONES) who joined the cast as Cressida, the head of Katniss’ production team. Dormer does a wonderful job of bringing Cressida to life, infusing her with the passion and drive of a video journalist who truly believes in her cause. Lastly I want to mention Elizabeth Banks (THE LEGO MOVIE) who reprises her role as Effie Trinket. While Banks’ role feels considerably smaller than in the previous two films, her deliver is perfect and I was very impressed with how she brought Effie’s new attitude to life. If this is the kind of work she can deliver, than her talents have certainly been underutilized by Hollywood thus far.

The latest installment of THE HUNGER GAMES has plenty going for it. It has wonderful production values, a deep and meaningful story, and features an ensemble cast that is sure to delight. While it may stumble a bit with some of the back story and dialogue, there is still more than enough action, characterization, and fun to justify a trip to the theater.