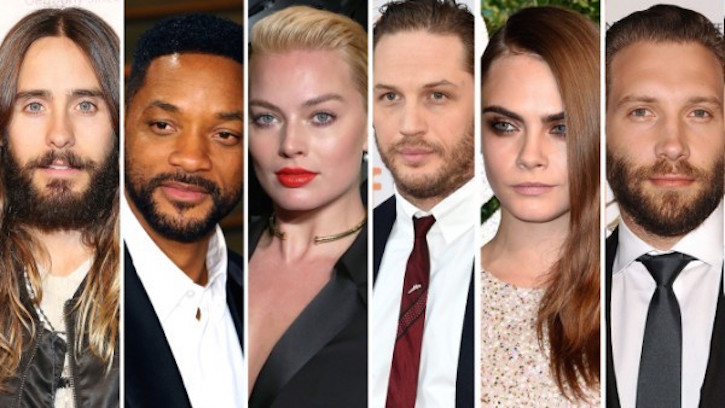 Well, this is quite the shock to my butt.  Warner Bros just officially announced the cast to their 2016 SUICIDE SQUAD movie and it’s actually… kind of impressive.

I’m just going to get this right out of the way and say that I’m not going to turn this into a ‘What Marvel is doing compared to what DC is doing’ kind of article.  We all know who is doing what and how each one is doing it. Lets move on.  This is the big kid’s table.

As I was saying, before I was so rudely interrupted by myself, David Ayer (FURY) will be directing a SUICIDE SQUAD movie that will take place in the newly establish DCCU.  5 months off the coat tails of their BATMAN VS SUPERMAN movie, DC will further expand the dark side of their universe in a single movie.  The idea of the SUICIDE SQUAD is that some of DC’s most heinous villains will be offered slight leniency in their sentences, in exchange for performing some dirty deeds for the government. This is an idea that could have easily been made into a television show starring an entirety of some of DCs lesser known villains.  Instead, they decided to go in the complete opposite direction.

I’ll just start off by saying that Jared Leto will be playing The Joker. Which is probably the only person I will allow after Heath Ledger’s award winning performance.  If that wasn’t enough, they got Will Smith playing the charming assassin Deadshot. Will Smith as a bad guy?  I think I would very much like to see that. Tom “Bane Voice” Hardy  is Rick Flag. I really don’t know who that is, but I imagine he will be charming. Margot Robbie is Harley Quinn. Harley Quinn.  Yes. We will be seeing a live action Harley Quinn in a couple of years. The cosplay rights alone will make us wealthy beyond our wildest dreams.  Leading up the pack is Jai Courtney as Boomerang and Cara Delevingne as Enchantress.  A lot of roles are still un-cast, particularly Amanda Waller.

Aside from the outstanding casting, the concept of the SUICIDE SQUAD is quite fascinating. It’ll be the first comic book based movie that centers around a collection of recognizable bad guys and not a small gang of heroes.  Making them more than just the obstacle the hero needs to vanquish. I mean, has this ever been done before? It’s a really bold move for DC. One that I think will pay off. It’s interesting to think that an ensemble movie will be coming out in a couple of years that will heavily be resting on the shoulders of the Joker. It’d be great to see cameos from Batman and Superman, but, it wouldn’t really be necessary.  Which is nuts.  Personally, I can’t wait til we start seeing photos of people in costumes.