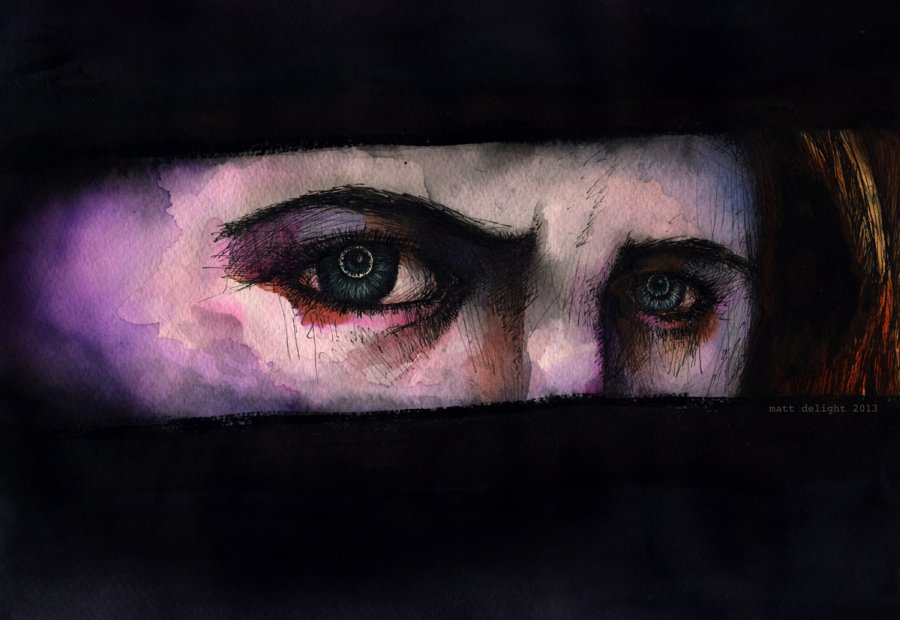 As someone who was left unimpressed with THE TWILIGHT SAGA, I went into THE HOST trying to both check expectations at the door and disconnect any association to author Stephenie Meyer’s previous material.  I’m unfamiliar with the novel that the film is based off of, but was curious to see if it would be something thematically different from TWILIGHT or if it would fall right in line with the paper-thin romance archetypes that series is now infamous for containing.  Though it it does have a more intriguing premise, the film unfortunately fits the bill of TWILIGHT’s cinematic shortcomings…and manages to somehow be worse.

Earth has been invaded by a race of alien beings referred to as “Souls.”  They have assimilated most of humanity by infusing their essences into our bodies and overwriting our personalities.  Only a handful of humans have evaded capture.  Melanie Stryder, played by Saoirse Ronan (HANNA), is one such survivor until she is caught and joined with a novice Soul called “Wanderer” (later shortened to “Wanda”).  As the film progresses, Wanda’s allegiances begin to shift to a group of human survivors as not only is she overcome by emotional feedback from Melanie’s memories, but as Melanie herself fights within their shared mind to stay alive and protect her loved ones.  I’ll give the film kudos for making Melanie/Wanda more active than Bella Swan as a lead.  That’s not to say she doesn’t wear out her welcome fast since the two are constantly talking to each other via an inner monologue.  As Melanie’s voice first popped up demanding that Wanda give her back control of their shared body, a horrible realization came to my mind:

Dear God…I’m going to be hearing this for the whole movie, aren’t I?

Throughout the film, Melanie is constantly haranguing poor Wanda as a disembodied voice.  She bosses her around, she complains that her old boyfriend Jared, played by Max Irons (RED RIDING HOOD), is kissing her while knowing full-well that she’s an alien and chastises the naive Soul for developing a crush on another guy Ian played by Jake Abel (I AM NUMBER FOUR).  This dynamic may have worked well in the book, but it gets old fast on film and is a major annoyance.  Any scene where it seems Melanie and Wanda are truly understanding one another and connecting is immediately undercut by a scene where they mentally bicker over the smallest things.  Imagine having a Kardashian or Lohan constantly talking to you in your head…only for two hours.  Fun! 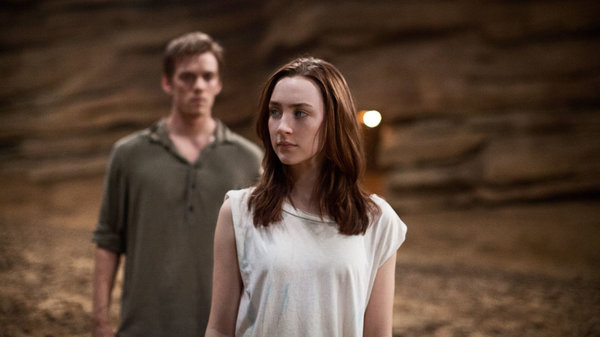 While not necessarily a new concept (something tells me SUPERIOR SPIDER-MAN writer Dan Slott is a secret fan of THE HOST), the “two souls in one body” plot could have been an interesting look into what truly defines our individuality let alone our humanity.  Is Wanda being influenced by Melanie’s presence to go against her nature or has being given a human body unlocked something that was within Wanda all along?

Unfortunately, this is a major issue with the movie and where parallels to TWILIGHT need to be addressed because this is a common theme I’m finding in Meyer’s work: she establishes an intriguing setting and world dynamic and does absolutely nothing with it!  Thought-provoking questions on identity and individuality are barely given their due, characters that we should care about are provided with the flimsiest background and motivations so they come off as unbearably hollow and unappealing and the promise of a true sprawling Sci-Fi drama is squandered in favor of a dull romance that has as much sentiment as a Hallmark card.

Now before diehard Meyer fans jump all over me, let’s clear the air: I like romance stories fine, even corny ones.  CASABLANCA is one of my favorite films of all time.  I routinely watch LOVE ACTUALLY, ETERNAL SUNSHINE FOR THE SPOTLESS MIND, AS GOOD AS IT GETS and TRUE ROMANCE.  I enjoy interesting romance stories where you see characters become attracted to one another, develop their relationship in a very natural way, see who they are as individuals first and a couple second and become invested in their need to overcome obstacles together.  In THE HOST, there is none of that.  All Wanda gets from Melanie’s memories are images of her and Jared kissing in the rain, kissing by firelight and forcing a kiss on her when they first meet because he hasn’t seen an actual human girl in two years.  That’s it.  We never see them talk honestly about the gravity of their situation.  We don’t even know why they fall in love in the first place beyond that they might be the last two humans left on Earth and just immediately have an attraction to one another.

“Attraction.”  That’s really the key word, isn’t it?  The romantic relationships in THE HOST aren’t about commitment or understanding or development.  They’re about attraction.  And they stay fixed in that position and made-up to resemble true love.  Melanie gets a ringside seat of Jared’s foul and borderline-sadistic treatment of Wanda (he decks her once or twice and for a long time coldly refers to her as “it.”  Class act).  Given the dire straits of the humans, perhaps I could understand his violent response a little, but we’re never given a clue as to how tormenting it must be for him to see someone else behind the eyes of his beloved.  The same goes for Wanda’s relationship with Ian.  He heel-turns from choking her to death to giving her knowing looks and showing her beautiful desert sunsets with no real or believable explanation given to us. It becomes less a question of how Melanie and Wanda will find a way to be with the men in their lives and more, “Why the hell do they even like these jerks to begin with?” 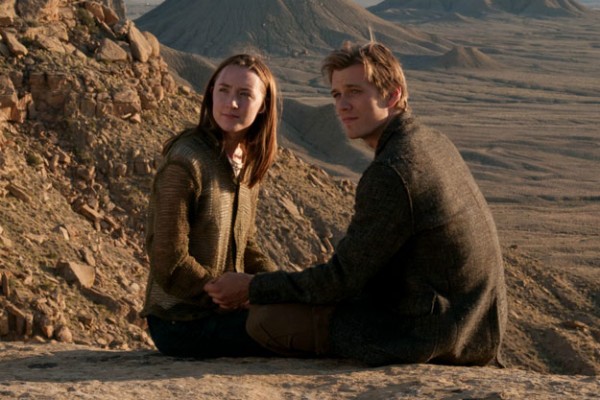 The acting doesn’t help matters either.  Ronan isn’t awful in the dual role of Melanie/Wanda, but the characters are horribly underdeveloped and the constant mental whining seals the deal on annoyance.  Irons and Abel are forgettably bland as Jared and Ian, making them a poor man’s Edward and Jacob (so pretty much the same thing).  William Hurt (ROBIN HOOD) looks like he’s ready to break for lunch in every scene, but gets a few unintentionally funny moments as Melanie’s uncle.  About the only person who seems to be trying is Diane Kruger (INGLORIOUS BASTERDS) as a Soul agent called a “Seeker” who continues a relentless pursuit of our heroes.  Honestly, her story arc would have made for a far more entertaining film.

And that can pretty much sum up my experience with THE HOST: the interesting movie was happening offscreen, but I was stuck watching a mundane love triangle (or is it “love diamond?”).  The “inner monologue” gimmick starts to ride your patience 10 minutes into the film, character motivations and personalities are just bare bones and it seems like the story is afraid to show realistic relationship dynamics beyond the superficiality of two attractive people canoodling.  There was promise in the concept of an internal struggle and complicated romances played out against a Sci-Fi backdrop.  But any intrigue or emotional investment is ultimately blocked out by the film’s (and, essentially, Meyer’s) simple one-note view on love: just keep it pretty.

Hear more of Mike’s thoughts on THE HOST in his latest McGTV video review below!  CAUTION: review contains explicit language.