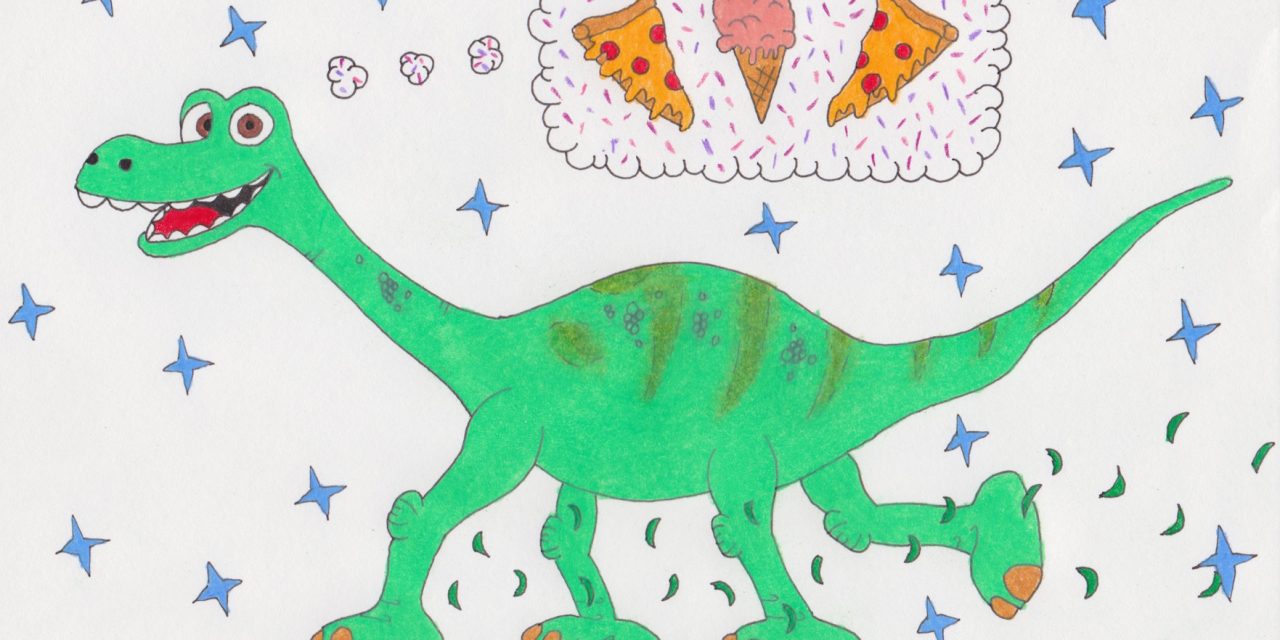 It is a rare thing for two Disney Pixar films to be released in the same year, but hot on the heels of INSIDE OUT is THE GOOD DINOSAUR, the latest visual treat from the computer animation pioneers.  The movie centers around Arlo, an Apatosaurus who is a little different than the rest of the family.  While his siblings are strong or clever, and his parents brave and steadfast, Arlo is a bit clumsy and practically jumps at his own shadow.  In an effort to help him overcome his fear, his father gives him the task of ridding the farm of a critter that has been raiding their silo.  Arlo succeeds in capturing the small rascal, who turns out to be a young human, but can’t bring himself to kill him.  His father, Poppa, filled with concern about the coming winter, chases the small boy with Arlo following close behind, unfortunately an unexpected storm sets in and causes a horrendous flash flood.  Poppa saves Arlo but is unable to escape himself and tragically loses his life.  Following the loss of his father, Arlo tries to pick up the slack at the farm, but when he sees Spot, the human child, again, he is hell bent on revenge, gets into a scuffle, and ends up plunging into the great river and getting swept downstream.  After getting knocked out by a rock he awakens lost and alone, save for Spot, who was washed away with him.  Now the two adversaries must team up if they are to survive and find their way back to the farm.

As soon as the movie starts it is clear that the production team is showing off, but the visuals are so breathtaking that I didn’t mind it in the least.  The panoramic shots of the environment surrounding Arlo’s family farm are so stunning and lifelike that you would swear they were real if you didn’t know you were watching an animated film.  This visual bragging pops up regularly throughout the film, most notably with water, whether it is a raging river or a pouring rain, they mastered the look and movement of water to a near perfect level.  There is also a very impressive wind scene that does an equally fine job of mimicking real weather and everything in the surrounding environment reacts as you would expect it to, which was captivating.  Directorial duties were handled by Peter Sohn (BRAVE), who has been working on various aspects of Pixar films for more than a decade but this is the first full length feature he has helmed; he also contributed to the story.  With the ever progressing visual prowess of Pixar it is hard not to take for granted the beautiful work they do, but this film takes it to a new level and reinstills the awe that comes from seeing something truly exceptional.

Unfortunately, the story isn’t as captivating as the visuals, which isn’t to say it’s bad, just that it feels much more like a Disney story than a Pixar one.  When you boil down THE GOOD DINOSAUR, what you really have is a coming of age frontier story, and all the hallmarks that go with it.  Losing a beloved parent, becoming friends with an adversary, overcoming a band of ruffians, facing your fears, a cattle drive, and even a peyote esk hallucination scene are just some of the western classics featured, and while they are fun, they fail to touch on the deeper meanings and emotions that the more powerful Pixar movies have.  That being said, a middle of the road Pixar movie is still far better than most other animated films and while this one is definitely more in the line of typical, kid oriented Disney fare, the story is still fun and entertaining enough to keep the audience’s attention.

Pixar has a knack for getting voice actors who are perfect for their parts and that trend continues in The Good Dinosaur.  Providing the voice of Arlo is Raymond Ochoa (FROM UP ON POPPY HILL), and this young acting veteran does a great job with the role.  Arlo’s journey changes him from a cowardly, fearful dinosaur into a confident, capable one, as such he runs the gamut of emotions throughout the film and Ochoa delivers every step of the way.  Whether screaming in fear of angry chickens or standing up to bullying predators, Ochoa flawlessly captures Arlo’s emotions in his vocal expressions.  Jack Bright (MONSTERS UNIVERSITY) takes on the role of Spot, and while it is a role that discards dialogue in favor of grunts, he does a great job with it, giving us the kind of basic verbal communication one would expect to come from early man.  Lending his vocal talents to Poppa is Jeffrey Wright (THE HUNGER GAMES: MOCKINGJAY PART 2).  Wright brings a deeper pitch than normal to Poppa, giving his voice a timber that feels more paternal than his natural voice, which really worked for the role and helped make his character feel both powerful and loving.  Frances McDormand (MOONRISE KINGDOM) provides the voice of Momma, and she does a nice job with the role.  Mcdormand has a commanding voice that can run a room, so it was interesting to hear her tone it down and deliver a more subtle and gentler tone in the role of Momma; I had no idea it was her and was pleasantly surprised when the credits rolled.  Lastly, I want to mention Sam Elliott (TV’s JUSTIFIED) who lent his voice to Butch, the leader of a family of Tyrannosauruses who heard big horns.  Elliott has a distinct voice that is perfect for westerns, and I often feel disappointed if I see a western and he isn’t in it, so it was great fun to hear him belt out orders and be the strong, hard, cowboy type that he is so well known for.

THE GOOD DINOSAUR may not be the deepest movie Disney Pixar have ever released, but it does have amazing visuals, amusing western tropes, and solid voice acting.  If you are looking for a treat for your eyes, a movie you can take the whole family to, or are just in the mood for a feel good coming of age story then head on out to your local theater and give this movie a watch.