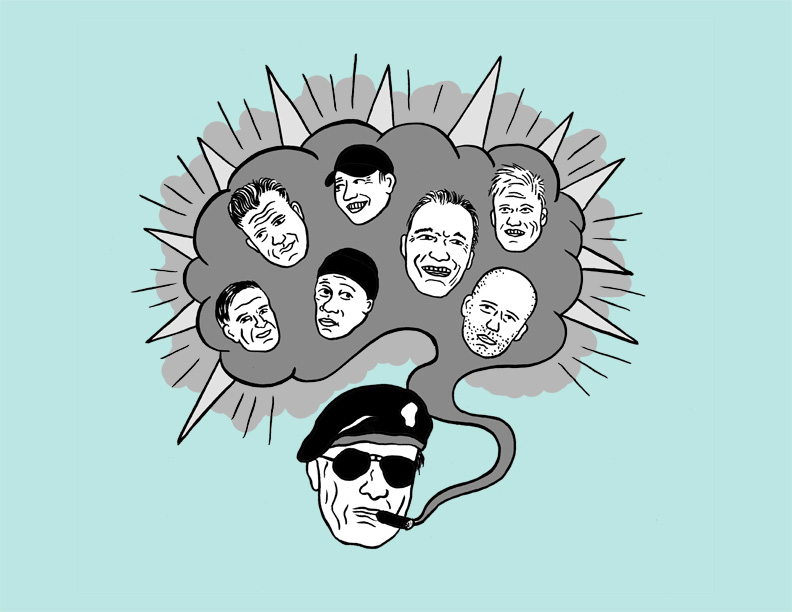 Man, I really can’t wait for the unrated version of this movie to be released.  Not because I think that THE EXPENDABLES 3 would be improved by much (if at all), but at least it wouldn’t feel like I’m watching a severely neutered action flick.

The premise for the EXPENDABLES franchise makes for ridiculously dumb fun: all of your favorite action stars of yesteryear joining forces or taking each other on for no greater goal than simply playing into the tropes of a standard blood and guts “shoot ’em up.”  And for the most part, the gimmick worked well in the first two installments whether it was getting the triumvirate of Sylvester Stallone, Bruce Willis and Arnold Schwarzenegger to finally exchange one-liners in a scene, having the hyper-kenetic Jet Li come to blows with the man mountain that is Dolph Lundgren or just letting Jason Statham do what he does best: be Jason Statham.  There was energy between the co-stars and even though you’ve seen these “mercenaries with hearts of gold” characters several times before, you didn’t mind watching the likes of Stallone and Statham take a crack at a stone-cold killer bromance.  You didn’t mind the amount of violent excess that came with taking on Big Bad Jean-Claude Van Damme in the sequel.  You didn’t mind the potshots at egos or winking at the camera because they would immediately follow it up with something unbelievably awesome and action-packed.  For as stereotypical and as “in-jokey” as the first two films were, they at least tried to be subtle about it.  Not so much here.

EXPENDABLES 3 once again follows the old war horse Barney Ross (Stallone) and his band of mercs as they hijack a prison train to rescue one of the group’s original members codenamed Doctor Death (Wesley Snipes) who was jailed, according to him jokingly, for tax evasion (Ha! Get it?!  ‘Cause Snipes spent 3 years in prison for willful failure to file tax returns.  Just let me know if you don’t get it yet).  No sooner have they recruited him for the next mission when disgraced “brother in arms” and Expendables co-founder Conrad Stonebanks (Mel Gibson) rears his sadistic head to attack Barney & Co. and bench their weapons man Caesar (Terry Crews) with a near-fatal injury.  Sigh…really, movie?  You push Terry Crews, arguably one of the more entertaining aspects of any project he’s involved with, immediately to the side but leave boring-ass Randy Couture in the rest of the film?  Since when has Couture added any kind of entertainment or tactical value to these movies?

Anyways, having one of his men down for the count apparently causes Barney to do some soul searching and he immediately disbands the team out of fear of endangering his comrades…ignoring the fact that in the last film, when a team member was actually f@#king killed, it only made them redouble their efforts for revenge.  Barney still wants to do Stonebanks in, so he turns to his new CIA handler Drummer (Harrison Ford) since Willis’ Mr. Church in “not in the picture anymore.”  Because he was fired.  From the picture.  Again…get it?!  With Drummer’s intel, Barney reaches out to assassin talent scout Bonaparte (Kelsey Grammer) to help him recruit the next generation of Expendables since it is no longer a “young man’s game.”  They’re old!  GET IT?!

Honestly, I would forgive the plot for the contrived “ditching the old guys who are totally gone from the movie and will in no way show up to help out in the climax” gimmick if it was at least transitioning into new characters that were entertaining and interesting.  SPOILER: EXPENDABLES 3 doesn’t do that.  The new recruits are so bland that I can’t even remember their dumbass names.  At least with charismatic leads like Statham and Snipes, I’ll be able to remember silly code names like Lee Christmas and Doctor Death.  Hell, I remember Arnold’s character is named Trench Mauser off the top of my head and he’s essentially just playing himself!  But this new group consists of memorable personalities and intimidating screen presences such as…um…a bland pretty boy from TWILIGHT (Kellan Lutz), a tough chick who can’t emote to save her life (actual MMA fighter Ronda Rousey), a monotone hacker (Glen Powell) and a real-life boxer who was on DANCING WITH THE STARS (Victor Ortiz).  The only new operative that actually garnered some investment from me was Antonio Banderas as Dalgo, a clingy sharpshooter who apparently forgot to take his Ritalin and annoys Barney to no end.  But again, Banderas is an established talent who is no stranger to this schtick.  When he switches into action mode, I buy it.

Believe me, EXPENDABLES 3.  I get it.  You want to “pass the torch” to the next generation of action heroes, but if these four rookies are your only offerings, I’d rather sit through more uncomfortable prolonged close-ups of Stallone’s sour  botox face.  I’m not here to watch the upstarts, I’m here for the veterans.  Take Mel Gibson, for example.  His villainous Stonebanks is actually pretty damn fun to watch.  He’s so full-on mega-crazy that you want to see him throw down with the likes of Statham, Snipes and Lundgren (Couture not so much.  He can be a cheerleader on the sidelines).  Heck, get him to go head-to-head with Jet Li, making it almost a LETHAL WEAPON 4 reunion.  But Stonebanks only shares screen time with Barney and his new team.  Okay, Stallone and Gibson changing insults and fists is pretty cool, but seriously, I don’t give a shit about these new recruits.  Why do they have to be there and drag down the proceedings?

And then there’s the PG-13 rating.  It’s insane that this film is a PG-13.  The body count is just as high as the previous two installments and it’s relatively bloodless.  Bull.  Shit.  Quick nonsensical edits and violent shaky cams…basically the things that piss me off about many modern action films…are in full use to squeak all the gruesome violence by the MPAA.  The action sequences are so hastily cut together and don’t take time out show what’s going on properly, that I’m just guessing henchman are falling over from tripping over their shoelaces and not from getting bullets in the face!  I forgive other action films that are geared primarily toward younger audiences (HUNGER GAMES, TRANSFORMERS, the Marvel Films) for pulling their punches, but did everyone just forget that in the last EXPENDABLES film five of our heroes turned one guy into pink swiss cheese with a gatling gun?!  This film comes from sterner stock and it’s effectively had its balls removed.

When EXPENDABLES 3 lets its cadre of seasoned action stars and actors do their thing, it’s serviceable.  But when the contrived “next generation” subplot rears its head or when the action scenes use spastic editing and disorienting camera work to hide their R-rated intentions, it gets to be a bit of a chore to watch.  My advice: wait for the DVD release (which will hopefully be unrated and uncut) to rent and just skip any of the scenes having to do with the fresh new faces…so basically 50% of the movie.

I hear there may be more sequels.  If that’s the case, I hope the franchise returns to the more brutal action spectacle, gets actual charismatic young actors (Taylor Kitsch, Chris Evans, Chris Hemsworth) to bring into the fold and never ever sacrifices Terry Crews over Randy Couture ever again!