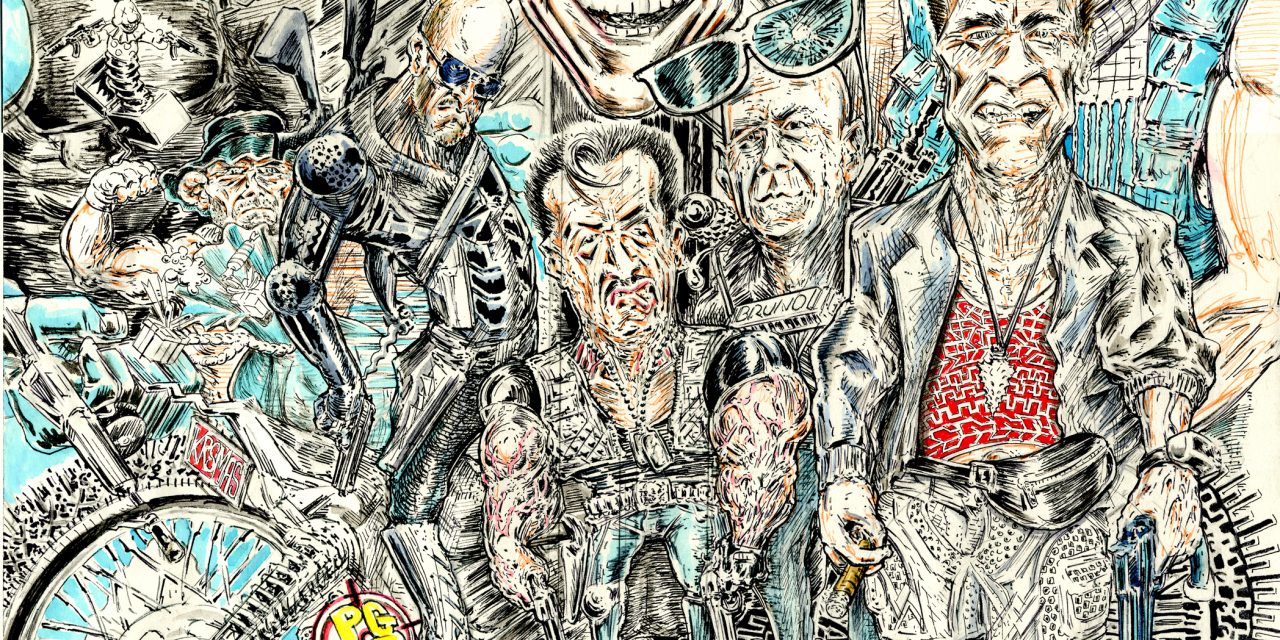 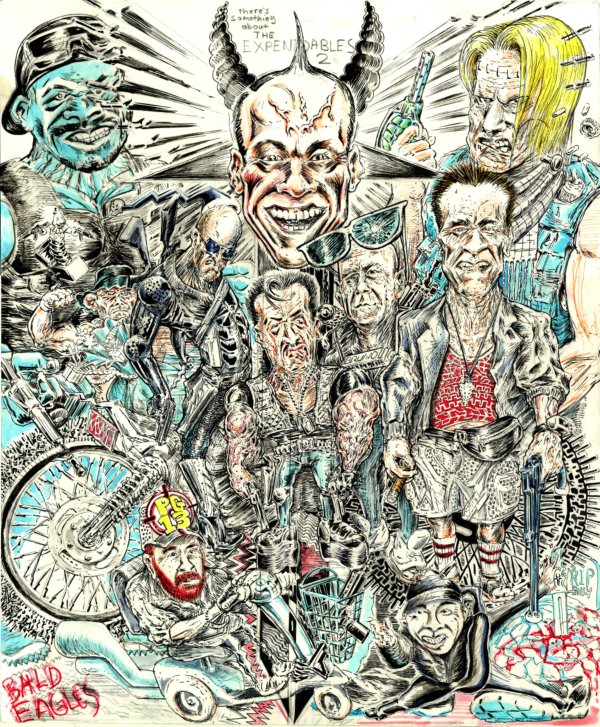 2010’s THE EXPENDABLES and THE EXPENDABLES 2 are nothing more than mindless big budget action movies that serve as a love letter to action movie fans…and I love it! I will go on record saying that “action” is my favorite movie genre and I love nothing more than well choreographed action sequences, bad ass heroes, and ruthless bad guys. THE EXPENDABLES 2 not only has all of that, but it has the most stunning action movie cast in history calling upon all out favorite action movie stars from the 80’s and 90’s. THE EXPENDABLES 2 is directed by Simon West (CON AIR, THE MECHANIC) and stars series mainstays Sylvester Stallone (ROCKY and RAMBO Series), Jason Statham (THE TRANSPORTER Series), Jet Li (THE ONE), Dolph Lundgren (UNIVERSAL SOLDIER), Terry Crews (THE EXPENDABLES), and Randy Couture (UFC Champion). We also get expanded roles for the legendary Arnold Schwarzenegger  (TERMINATOR Series) and Bruce Willis (DIE HARD Series) who only had cameo appearances in the first film. Additionally, this time around we get Jean-Claude Van Damme  (BLOODSPORT), Scott Adkins (UNDISPUTED 2 and 3), and the one and only Chuck Norris (WALKER TEXAS RANGER). Wow that’s a lot of names and hands down the coolest cast in an action movie EVER. 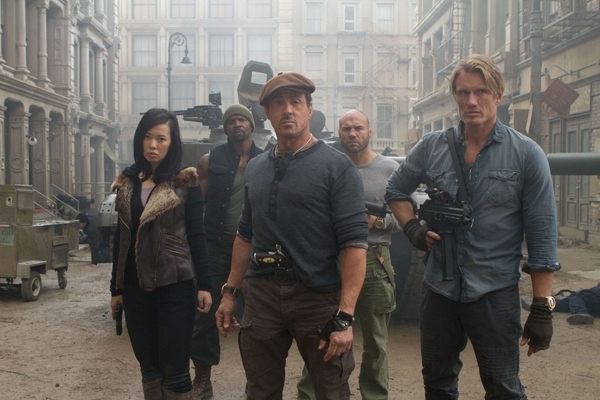 The script and story in THE EXPENDABLES 2 is paper thin. There is no mistaking that. A crew of mercenaries are hired to do a seemingly simple job that goes wrong and they soon get wrapped up in an evil plot that involves a bunch of baddies making weapons of mass destruction. You won’t care about the story, you won’t invest any emotion in the characters, and you sure as hell won’t be bored. The main reason why you should be interested in this movie is witnessing action legends on screen with one another kicking ass together. If you were to tell me back in the late 80’s or early 90’s that I would one day see a movie that featured actions sequences starring Stallone, Schwarzenegger, and Willis I would have crapped my pants, crapped your pants, and then I would have crapped on the pile of crapped on pants. Seriously people, there were a couple of scenes in this movie featuring all three of these actors and it is simply a nerd dream come true. So freaking cool and worth the price of admission alone. I don’t need to go into detail on individual performances because they are all just about the same. They all have some time to shine, they all kick tons of ass, and they all do what they do best. Like I said before, this is just a love letter to action movie fans and it seems like the creators of this film and its actors know that. Normally I’m not this excited about a movie that has such a corny and uninvolved story, but it was just so much fun to watch that I don’t really give a damn. 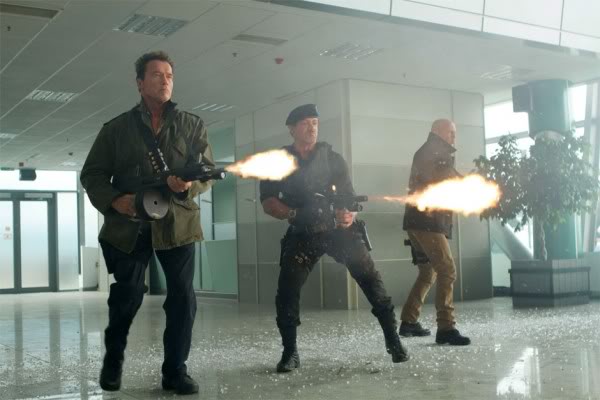 While the story may be paper thin, the action here is large and in charge! The opening sequence alone will make you forget you own a bladder. In my mind I thought that the first huge action scene could not be topped because it was so insane. I was wrong. The last 30 minutes or so of this movie was so amazingly fun that I thought my inner nerd child was going to rip his way through my chest Alien-style. Seeing all my favorite action icons blow people to shit together was insanely cool and something that will go down in action movie history. As I mentioned before, a dream come true. I remember a point a few months before the release of this film where it was stated that THE EXPENDABLES 2 may be rated PG-13. There is no way in hell that would ever work because it would mean that this film would last about 4 minutes. It seems like every 5-10 seconds someone is getting blown to shit with limbs flying, heads rolling, and blood splattering. Make no mistake, THE EXPENDABLES 2 is rated R and it is ONLY for being so brutally violent. Sorry Mr. Norris. 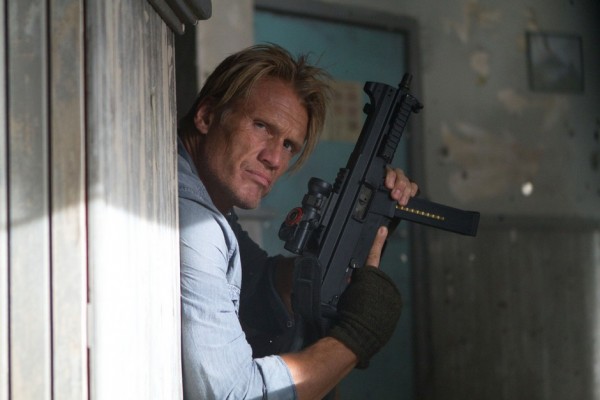 There really is not much more I can say about THE EXPENDABLES 2 besides the fact that I had an absolute blast from start to finish. The movie is basically a bunch of small, yet effective, action scenes sandwiched between a pair of brutally awesome and huge action sequences. Something worth noting is that the cast really makes this movie what it is. That may seem a bit obvious, but I have to admit that if this movie was filmed exactly as is but with different actors it would have sucked. The actors and there iconic action movie status really make this one shine. And that’s really all the creators are trying to accomplish. Any fan of action movies owe it to them self and their inner nerd to see this film. It’s big, it’s loud, and it’s bloody good fun.