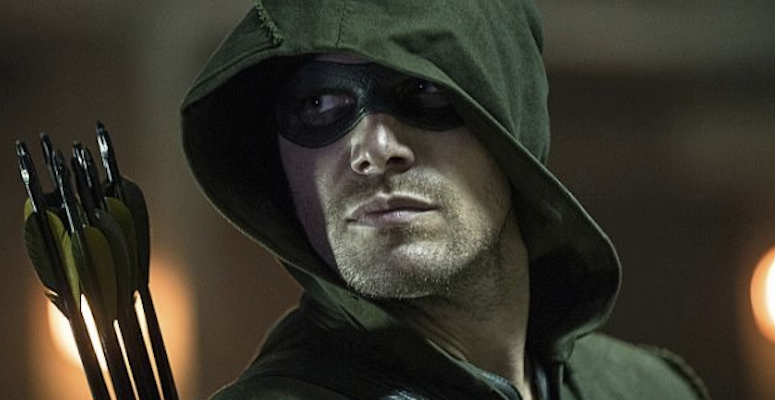 Damn, I love this show.

They just get right back to it, don’t they. Why, I didn’t even get a chance to catch by breath before, “Oh hey, there’s Roy in full costume. Sweet!!!” And Ollie (the Arrow) runs off nabbing a baddie with a…I dunno…a spider-web arrow (Cause that’s what you get for going down that web of crime). It’s still the over-the-top, action/adventure comic-book show I’ve been waiting my entire life for.

Season two ended with rouge Frankensteins running around and Deathstroke getting put in the super pokey. Season three begins with our hero’s taking care of business, and taking out the trash. The city ripe for criminals after the aftermath of Deathstrokes rampage. Just like last time. Now, I have personally watched (on TV) Starling City practically destroyed twice now…and lemme tell ya…they don’t give a shit about rebuilding. They hold a press conference, deal with the (sometimes new) local gangs for a few episodes, and then move on to the next major problem.

The story re-boots and progresses forward at the same time. Not unlike that popular MC Skat Kat song ‘Skat Strut’. Honestly, even as a superfan of the show, I find it kind of frustrating. Where is the woman that won’t leave her house because of ‘the night the supermen strangled everybody’. Where are all the displaced citizens after each disaster? Or just dudes fixing shit? Replacing a window? One window? And does Starling City even have a mayor!?!?? (this one always gets me)

But, that’s what makes it great. Who cares. That’s why they have THE WIRE. ARROW will answer those questions, if/when the story takes them there. For example, they introduced a huge emotional plot point that I thought they’d never get around to addressing…and yet…they did! Yet, what I thought was going to be a huge plot point, Officer Lance almost dying, has only become a old dude that needs pills. I was totally expecting a Lazarus Pit. But, I’m sure something wicked will come of it later.

Because, it is always re-booting and moving forward. Just like a comic-book. And it’s soooooooooo comic-book. In a genius casting move, they hired Peter Stormare to play Werner Zytle. The new Count Vertigo. As the new Count he plants a huge bomb at a boxing fight. Classic super villain stuff. And, he drugs the Arrow with ‘the new’ Vertigo, and Arrow has to fight himself. In the end Zytle makes the statement that Arrow is what makes the drug Vertigo so popular. There will always be a Count.
So yes, it’s still a little Batmanesque (But, in all the right places).

I can’t say too much more, in fear of spoiling…everything…hella happens. Yer favorites are still yer favorites. And, while it’s clear that this season is gonna be more, ‘boots on the ground’, expect to see some for serious universe building. JLA TV!