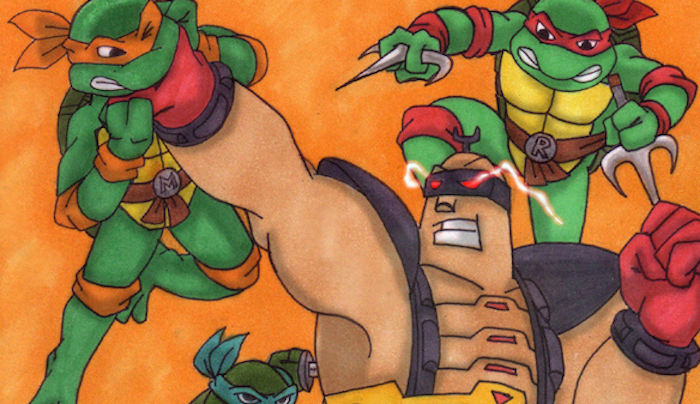 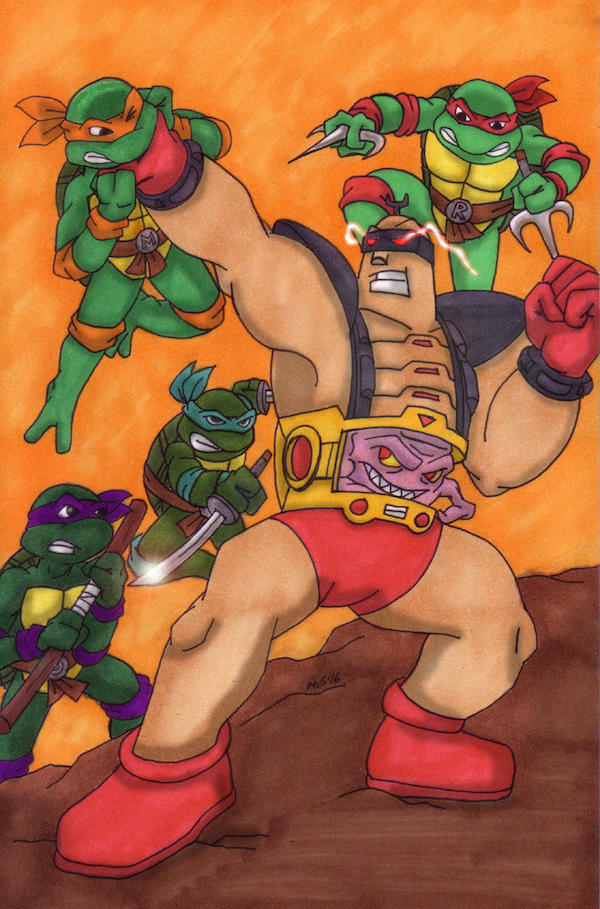 This isn’t DEADPOOL with meta-humor and hilarious-yet-heartfelt vulgarity.  It isn’t BATMAN V SUPERMAN with a gritty visual palette and self-serious characters.  It isn’t even CAPTAIN AMERICA: CIVIL WAR or X-MEN: APOCALYPSE with globe-spanning superhero brawls and ever-expanding cinematic universes.  It’s TEENAGE MUTANT NINJA TURTLES: OUT OF THE SHADOWS and it only has one agenda: to be stupid, entertaining fun.  And it succeeds in that endeavor.

I’ve never expected epic genre-shaking storytelling from this franchise and I seriously doubt that the original creators and current head honchos have such lofty ambitions.  The original Mirage comics in the early 80’s were a dark and creative parody of the comic trends over-saturating the market at the time and never strived to be more than awesome action and melodrama starring giant reptiles.  The 1987 cartoon embraced even more of the silly and cemented the Turtles as a huge marketing juggernaut.  And one could argue that ever since that point, all subsequent versions of the property have been perfectly comfortable resting in this kid-friendly zone.  In a world where our favorite characters from nerd culture and childhood run the risk of either being too dumbed down to be appealing or taken too seriously to the point of not being fun, it is honestly refreshing to see that the Green Machine stays constant.  They may be decked out in different threads, but the Turtles are still just…Turtles.

I had no real “fanboy rage” towards the first film in this rebooted series, “toxic avenger”-styled Turtles and Megan Fox casting aside.  I knew exactly what I was in for and expectations were neither surpassed nor lowered.  Was it dumb?  Certainly.  Was there perhaps too much emphasis on the human characters?  Sure, but at least they weren’t annoying.  They were just kinda there (and what do you expect from a producer who brought us three Shia Labeouf  stammer-fests guest-starring the Autobots?).  All in all, it accomplished what it set out to accomplish.  Nothing more, nothing less.  OUT OF THE SHADOWS meets the same standard, but with a few marked improvements.

One major feather in the film’s cap is that it took to heart the lessons from the previous installment.  The Turtles are front and center this time around and with good reason.  They are the very much the heart of the movie with their distinct personalities shining through (Leo the no-nonsense leader, Raph the resident hothead, Don the analytical mind and Mikey the good-natured jokester).  The motion-capture performers appear to inject a lot of life into their roles and it is great to see the characters finally have scenes with some depth to work with that was reminiscent of the character dynamics in the 1990 film.  Add to that a more compelling story arc regarding their constant struggle for acceptance in the human world and already the sequel instills more investment in the Turtles than it did before.

Another advantage SHADOWS has is that it seems to have fully embraced the wackiness of the ’87 show complete with a manhole cover-spewing Party Wagon, buffoonish mutant muscle heads Bebop and Rocksteady making their live-action debut and a kinetic final battle against giant brain warlord Krang in his Death Star-like Technodrome.  The spectacle of the action scenes harkens back to all of those episodes where the half-shell heroes tried out all kinds of gadgets to beat the Foot Clan.  Bebop and Rocksteady’s antics may be annoying to the uninitiated, but it was business as usual for me (and at least they were not “Skids and Mudflap”- levels of racist).  And Krang’s introduction into the movie may feel a little rushed, but it’s kind of worth it to finally see him taking on our four heroes in a giant android body (an iconic visual that’s been engraved into the nostalgia center of my brain for years that of course it was going to feature in my above artwork).

About the only aspect of the film that never really worked for me was, again, the human supporting players.  It’s really telling when Tyler Perry’s broadly-played Baxter Stockman is gelling better with the silliness of the plot than anyone else.  I’m thankful of Megan Fox’s April O’Neil having a truncated role in favor of the title characters, but not to the point where she could be easily written out of the film.  I really didn’t think Fox was terrible in the first movie as a lot of her reactions and interactions with the Turtles did feel genuine, but this time around she’s not really given anything fun or of consequence to do and has blatantly been reduced to the gratuitous eye candy producer Michael Bay made her in the TRANSFORMERS films.  Will Arnett’s Vernon Fenwick is given a little bit more to work with comedically this time around as a glory hog taking credit for the happy ending of the last movie, but ultimately was nothing really necessary.  Laura Linney pops into the story every once in a while as the Chief of Police and essentially plays the “Commissioner Gordon” to the Turtles’ “Batman,” but that is pretty much it for her.  Stephen Amell as Casey Jones doesn’t really add or take anything out of the viewing experience.  I can appreciate that he is trying for something lighter than his Oliver Queen character on ARROW, but it’s not a good fit and the Jones character is so thinly constructed that it could have been any random guy if not for the name.

But the biggest disappointment on the human side of things is Brian Tee as the Shredder.  Appearance-wise, he may be closer to what we wanted for the classic Turtle villain, but he’s never given anything really awesome to do.  Most of the time he just flashes his blades and stands around looking at people.  This was a sorely missed opportunity as he does share a majority of his screen time with Bebop and Rocksteady and his trademarked annoyance with the bungling duo from the cartoon is completely absent.  He doesn’t insult them or threaten to put them in their place when they get too over-the-top.  He just gives them a confused look every once in a while.  Heck, he doesn’t even have a real fight scene with the Turtles at any point and is immediately “put on ice” by the end of the movie.  At least Super Shredder from SECRET OF THE OOZE (the most useless Shredder in TMNT lore up to this point) tried to kill the Turtles by dropping a dock pier on them…and himself.  Bottom line: Tee’s Shredder is a big misfire but could still work in the inevitable sequel.

Thankfully, the energy of the Turtles, their mutant adversaries and the grand scope of the action scenes salvages a lot of this movie.  Sure, all of the fan service is delivered at a breakneck pace, but really is it any different from when they did this kind of stuff on the cartoon?  While a feature film adaptation of the original gritty comics would be cool to see, that will not happen so long as the Turtles can sell one more action figure to kids.  But as a longtime fan accepting of everything good and bad about the franchise, I’m perfectly content for the time being on getting a spiritual successor to the entertainingly dumb ’87 incarnation.  The Turtles have never strived for greatness.  They just strive to be fun and, on that front, they seem to be succeeding.

It’s not award-winning, it’s not God-awful.  It’s just…Turtles.  And that’s perfectly fine by me.