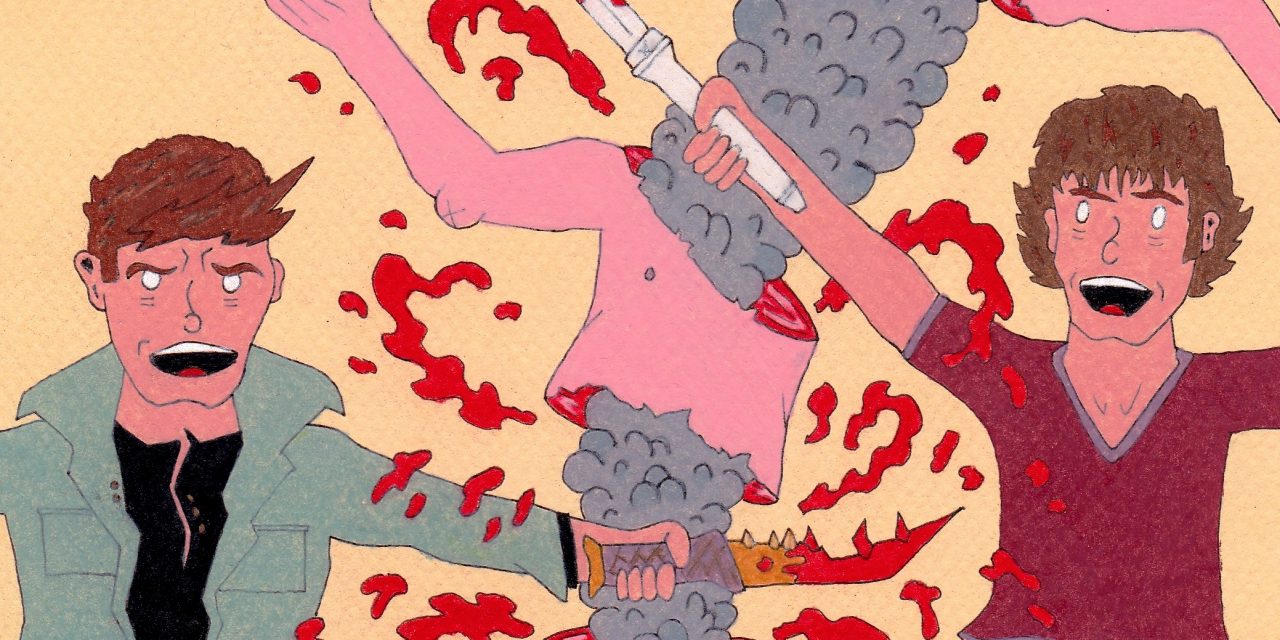 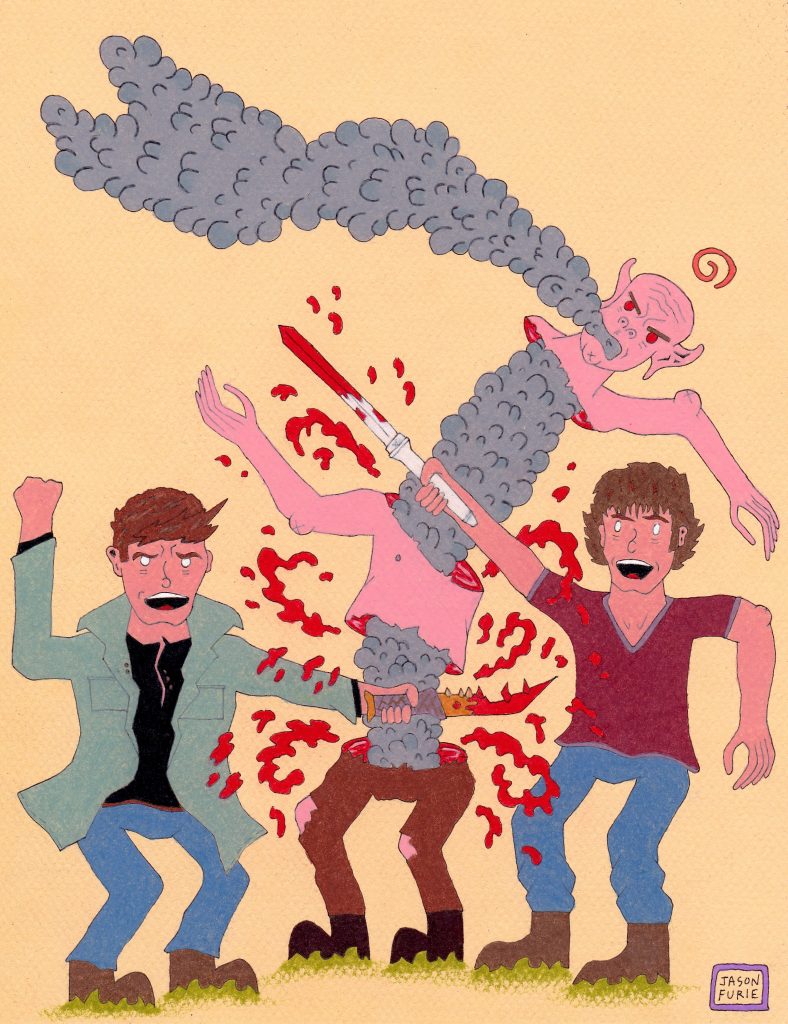 I don’t understand why Garfield is so difficult to Jon?  Jon tries so hard to make him happy.  He cooks him lasagna whenever he wants it. He puts up with all of Garfield’s psychological abuse.  All Jon wants is to be loved.  Is it too much to ask for just a LITTLE… God DARN Respect! IS IT!?

Okay.  Sorry about that.  I think I’m just feeling a little emotional lately. I can’t help but feel like maybe Sam performed the final trial on me at the end of season 8. I definitely experienced this season as a changed man. I awoke this season to find that I was trapped somewhere between the SUPERNATURAL super fan I once was and a bitter old crossroads demon who’s ‘seen it all before.’  And by ‘crossroads,’ I mean that terrible Britney Spears movie where her mom wants nothing to do with her and she almost gets murdered by some random hitchhiker with a six pack. There I was, curled up on my couch every week, watching my favorite show and wondering If I would ever be the young optimistic young buck that I was during season 4?

For the longest time, I was the most vocal champion of SUPERNATURAL. (I still am, calm down. Let me finish, you impatient little…) I would manically jump between seasons and lose entire days cruising around in the back seat of that old Winchester Impala. If only. Dean would be torn to shreds by hell hounds.  Sam would become addicted to demon blood.  Dean would be trapped in one of the three versions of the afterlife.  Sam would become possessed by some all powerful being. One of the brothers embarking on some dangerous mission and deciding that they have do it ‘on their own’ because it’s not the other’s fight. Over and over the cycle would end and begin anew. Watching season 9 of SUPERNATURAL felt like watching a recap of every season before it.  ‘Oh, one of you is keeping a major secret from the other that will result in you two having a huge fight and walking separate paths for a few episodes? Okay, let me know how that ends up?’  In fact, this season felt like they didn’t even remember making any of the mistakes they’ve already made in previous seasons. (Ancient weapons ALWAYS have repercussions!)  I couldn’t really figure out what the purpose of this new season was. It wasn’t until the final moments of the final episode, that it all become painfully clear to me.  ‘Familiarity breeds contempt.’

This latest season started off by putting the chess pieces of good and evil in their expected locations. Hell was in chaos due to the absence of their King.  Metreon exiled all angels from Heaven and slammed the door shut. Sam was near death, as a result of the trials, and tricked into allowing an angel named ‘Gadreel’ into subletting his brain. And Dean, well, Dean was consistently embodying the optimy of ‘Dean-ness.’  This season wasn’t about trying to tackle a new problem, but, more about fixing all the problems they created in the previous season. Which, now that I think about it, is every season of SUPERNATURAL.  ‘What the hell are these Leviathan creatures we just released?’ ‘How the hell do we defeat Lucifer, that we just accidentally released from Hell?’ ‘How the hell do we break the deal we made with a Cross Roads Demon in the last season?’ After 9 seasons of SUPERNATURAL, I guess I just expected more from the Winchesters and Castiel.  By this point, they should be able to collapse the power dynamic of hell, over throw Metreon from Heaven’s throne, and still have time for a double bacon burger, a side salad and maybe a glass of water.

Ever since defeating the Leviathan in Season 7, It feels like the Winchesters went from being purely defensive, to being on the offensive. Which is great considering how often they are trying to keep up with the new ‘big bad’ that is attempting to plunge the world into eternal darkness.  The ‘family business’ became a mission to take the fight to those who kept trying to destroy the world and finally give humanity a chance to live without some random apocalypse looming in the horizon. Season 8 was all about collecting the tablets and deciphering some way of shutting down Hell forever.  Suddenly, the threats were all threats they brought on themselves. Season 9 was them picking up the pieces of their failed attempt at being proactive.  I guess this is how every angel and demon feels after having had their plans completely derailed by a couple of mortal brothers?  All human souls are trapped on Earth. Metetron is manipulating the angels.  Abbadon is attempting to steal the thrown of Hell. All Sam and Dean would have to do is pretty much put everything back to the way it was at the beginning of Season 8.

All this being said, the last moments of the finale really put it all into perspective for me. Actually, Crowley put it all into perspective for me.  The Winchesters had fallen into a cycle.  The same sins and mistakes were constantly being made over and over.  One of the brothers dies and the other sacrifices himself to bring him back. The world is saved and their souls are compromised.  Over and over.  Sam made it perfectly clear that if Dean died, Sam wouldn’t compromise his ideals to bring him back and that’s exactly what he was about to do once he discovered that Dean was dead. The brothers were in and rut and so was I. I grew bored of the same stories being told in different ways. My obsessive fan love was wavering. The season finale had all of the important and familiar SUPERNATURAL season finale plot points.  Doubt. Fear. Betrayal. Victory. Loss. And then, something unexpected happened. Something I didn’t expect.  Something that would drastically change the dynamic of the show.  Dean is now a demon.

I suppose I had a bad taste in my mouth at the start of this season because I was a little sad to see the same familiar patterns of previous seasons. Right off the boat, we have Dean allowing Gadreel to possess Sam and then keeping it from him! ARGH! Dean, you know better! After that, the classic Winchester mistakes just kept coming and coming.  Dean unwilling to admit his selfish nature.  Sam unable to accept that he is more than just the ‘family screw up.’  But, that’s what this season was meant to be. Clearly laying out the familiar patterns of SUPERNATURAL, right before ripping the rug out from underneath us. After 9 seasons, it’s time to change the beat.

What does the ending mean for the next season? Is Dean still inside there somewhere?  Cain was able to eventually regain his humanity, can Dean?  Sam knows how to cure a demon, will he cure Dean?  That is, if Sam is free of the trials.  It would be interesting to see Sam save Dean, at the cost of his own life and end up closing the gates of Hell. Regardless, I almost lost interest in this season.  I almost lost interest in the Winchesters.  Dean being a demon brings a whole new dynamic to the show.  Let’s hope that they don’t cure him in the first episode. This is an opportunity for the show to completely reinvent itself. Long term fans grew tired of the same stories and this is an opportunity to give us something new.  Nobody likes change, but, this season showed us that we are desperate for it. Watching a new season that consists of Sam and Castiel at war against Crowley and Dean could be one of the most amazing things that has ever happened to this show. I’m eager to re-watch this season, knowing how it ends.  Watching how the Winchesters acknowledge their flaws and tragically fight to break free of their imperfections. All the while, knowing that shit was about to change forever.  Maybe…

I am sad that Castiel didn’t have to struggle with humanity for too long.  I half expected that I would watch each episode, waiting for Castiel to get back to full strength and each episode, go home disappointed.  That maybe, he would regain his powers in the season finale in some big ‘the power was inside of you the whole time’ reveal.They have toyed with the idea that eventually, one of the brothers was going to fall completely into either one of the sides they continually exist between.  Sam’s death showed Dean something that he was not prepared to see.  That perhaps he is nothing without his brother. Addiction seems to run in the family.  Addiction that is fueled by the belief that it is serving a higher purpose. 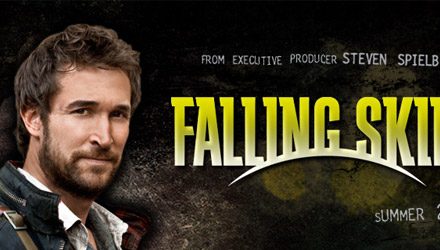 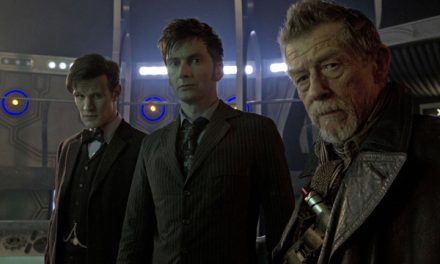 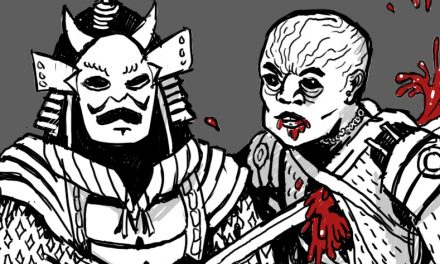